Theatre of the Absurd was a term coined by theatre critic Martin Esslin in 1960 to describe a movement of largely European playwrights – Beckett, Ionesco, Genet and Pinter to name a few. They tackled, in their mainly non-linear, seemingly illogical plays, the tragi-comic delusions of characters adrift in an arbitrary universe devoid of, and resistant to, any kind of meaning or purpose. 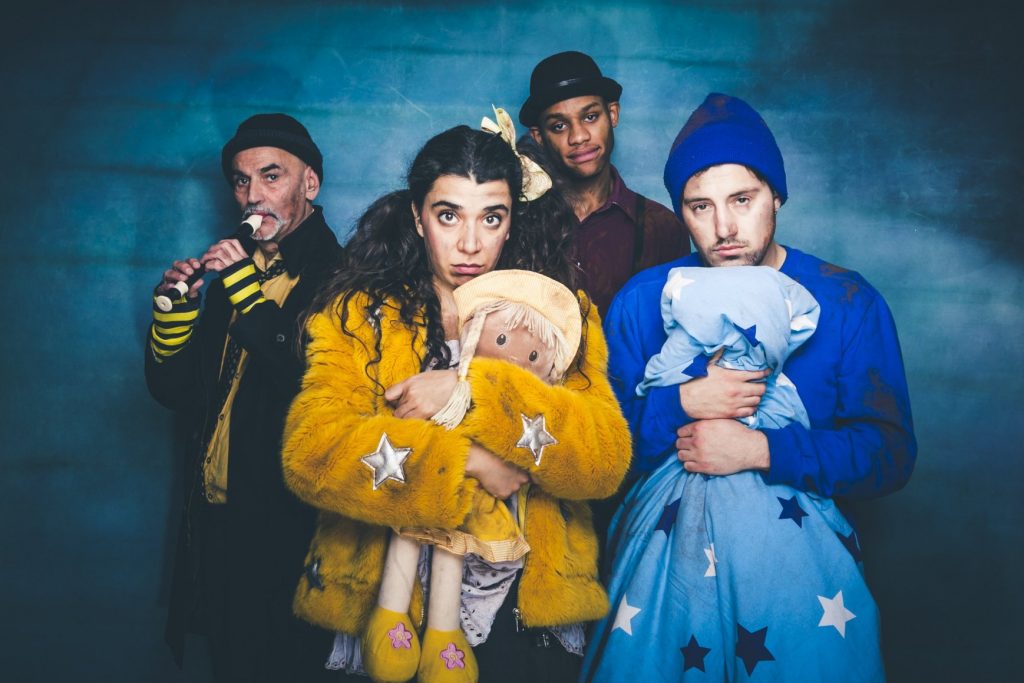 Spanish writer Fernando Arrabal was an important figure in the development of this mid 20th Century reaction to two world wars – he was a friend of Samuel Beckett – and his play, written in 1953, utilises a lot of the techniques employed by the Absurdists: irrational, unpremeditated action, vaudevillian physicality, repetitious, cyclical dialogue full of wordplay and mind games, and random events designed to shock the audience into new areas of thought and perception.

In The Tricycle, evocatively brought to the stage by Gobo Teatro, three poor, homeless youths, Climando, Mita and Apal murder a rich man and steal his money to pay for the tricycle they hire to take children for rides around the park.

Such is their naivety and childlike ignorance they fail to see the inevitable repercussions arising from their actions. It is a deed executed (literally) without hatred, anger and little planning. Because the violence happens off-stage to a character we never meet, we too, somewhat disconcertingly, have little empathy for the victim (whose flowing blood is symbolised by red petals and paint spray). The play’s odd, gently discordant tone is furthered by everyone’s reactions directly after.

No one tries to escape. They return to the park bench where they live and carry on with their largely inane, occasionally sinister banter and play infantile, though keenly felt, power games with the ragged Old Man, who also lives in the park. Ultimately, the police, spouting incomprehensible, authoritarian gibberish – the language of state control that no one can understand – arrive to deal with the heinous crime.

Of course we, as the audience, are invited to make of this what we will. That’s the point. Perhaps the tricycle of the title and the rich man they kill represent capitalism and it’s exploitative, inhumane dog-eat-dog nature. Or perhaps not. Certainly, themes of social alienation, poverty and homelessness are particularly relevant today and give this production, ably directed by Jesus Chavero, an acute political resonance.

However, we should also be entertained and find – even in the midst of horrifying circumstances – moments of amusement because one of the stated aims of much Absurdist Theatre is to laugh at the miserable defeats, misunderstandings and humiliations that life inflicts on us.

To this end, the play is well served by its company of four actors. Ryan Yengo brings a likeable charm to the role of Climando, at once both innocent and calculated; Lakshmi Khabrani is a vibrant, well-drawn Mita (who seems to grow in stature after the murder); Jerry Ezekiel brings an entertaining music hall quality to the vaguely creepy Old Man (a role in Godot surely awaits), and Tom Patrick Coley, as the life-avoiding Apal, manages to stay nicely in the moment, despite being asleep for most of the play. Some of the repartee could be a little sharper but overall, this is solid ensemble playing in a worthy revival.

The Tricycle is currently showing until Sunday 2nd February 2020 at Barons Court Theatre. To find out more about the production, visit here…