In December 2019, Akeim Toussaint performed in London his solo show Windows of Displacement at Stratford Circus, which returns to London on 21st and 22nd March for the Vault Festival. It is a transfixing hour of spoken word, song, and dance. 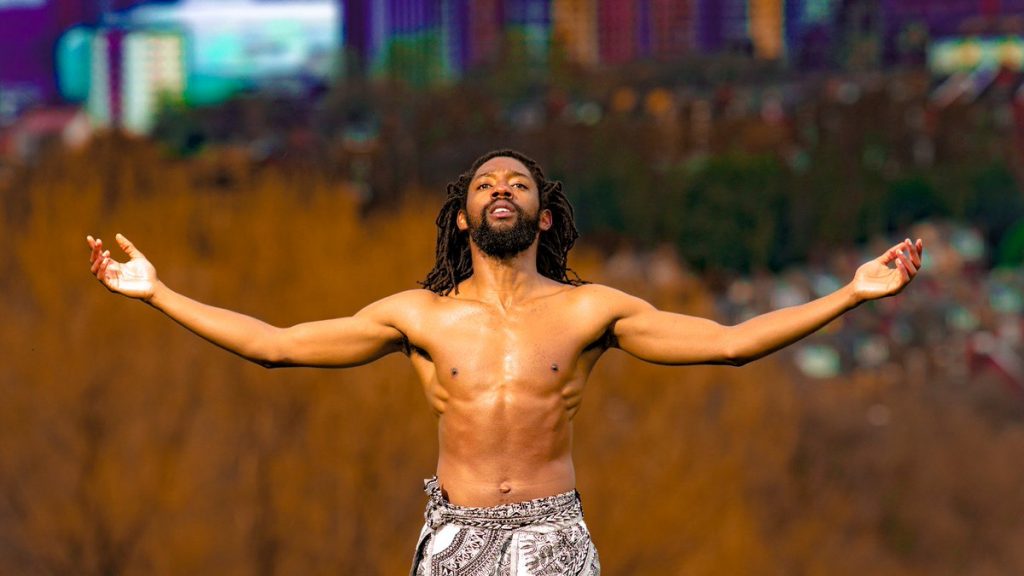 He first presents us with history and today, drawn with his arms as two separate entities, and poses the question: What differentiates past from present if sentiments and power structures remain unchanged?

History is frequently described as cyclical: there’s peace and war, the economy booms and busts. Toussaint deftly sets out a straight, unwavering line from the misnamed “history” of explicit, on-the-ground colonialism and slave trade to the racism embedded in capitalist institutions now in 2020. He does so with a narrative centred around his family’s global movement: his ancestors first as victims of the UK’s slave trade to Jamaica from west Africa, then to England in Toussaint’s adolescence in hopes of better opportunities away from the deprivations of colonial exploitation: “We moved to England because England moved we.” The line he draws is straight and true but covers a breadth of history and physical space across the globe to illustrate the myriad ways in which “post-colonial” is a misnomer. Jamaica, like other colonies, was forced to send all export profits back to the United Kingdom, yet is still denied use of the pound, a much stronger currency than the Jamaican dollar. The International Monetary Fund, in response to Jamaica’s $2 trillion debt, further subjugated its economy by imposing brutal austerity measures, keeping the people whose labour continues to enrich Britain in poverty. Jamaican soldiers fought on behalf of their oppressors in both world wars but were segregated and denied recognition. By the time Toussaint gets to describing the bureaucratic humiliations UK residents from the colonies must pay for when applying for citizenship, the line has been drawn so clearly you could reach out and break it.

Toussaint frequently provides his own percussion and dynamically shifts shapes across the stage, but it is with his upper body he furnishes the story and moves the narrative. A recurring stance is a crouch, rifle at the ready parallel over an extended leg, as a rebel fighting the British army, a Jamaican conscripted to fight in World War 2, a brutalised child in the Congo trapped in the barbarism of mining minerals for smartphones. His movements are uncannily evocative, and a monologue about slavery is introduced with unmistakable motions that forewarn the audience of what’s to come.
This is some heavy subject matter, but throughout the show Toussaint warmly and directly engages the audience, imbuing it with joy.

Singing is a key part of the show, and a deep, versatile voice breaks the silence when the stage lights came on. Of several Jamaican songs reprised, Toussaint involves the audience in a call and answer chorus. During an interactive segment, Toussaint beatboxes as we use our smartphones in an act of good neighbourship. It could feel like a gimmick, but Toussaint’s openness and equanimity fosters friendliness amongst strangers gathered in the theatre.

His closing message is to be “a mother to another in need” in the face of hideous, dehumanising capitalism. In a chilling appeal two days before the general election, Toussaint urges us to be kind to each other because of, not despite, our differences, and reminds us that small acts of neighbourly activism lead to big acts of radical activism. Windows of Displacement beautifully links our interpersonal dealings and societal structures, to the global economic system and is an especially salient work in today’s hyperpartisan political climate.

Windows of Displacement was shown from Wednesday 11th to Thursday 12th December 2019 at Stratford Circus. It will also show on Saturday 21st and Sunday 22nd March as part of this year’s Vault Festival. To find out more about about the production, visit here…