The Welkin @ The National Theatre Review

The script has moments of brilliance, the performances are nuanced and layered, the soundscapes are brilliant and yet I sit wondering if this is actually any good. It should be, there isn’t a disastrous artistic decision I should slate, but there is a lack of cohesion that leaves the play feeling incomplete, or that’s deliberate? 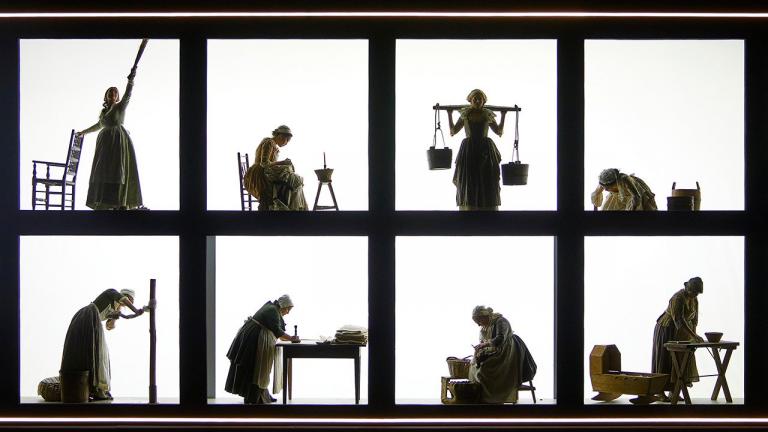 Fundamentally this show is an important one, it is an unavoidably compelling, necessary message which has been conveniently ignored by men for far too long. It’s irrefutable that the criminal justice system has been, and somewhat still is, governed on patriarchal foundations, and this show takes a step in the right direction to offer a story which has been ignored.

A woman is wrongly accused of murder, eleven jurors agree, one doesn’t, conflict follows. This plays backdrop to a cross-section of class and power, which is explored excellently in the stage proxemics and status shifts and cuts and the director and movement director deserve a great deal of credit for how this was deconstructed.

The show is quite literally framed, all characters are imperfect, at no point are you allowed to feel for any characters, to prevent sensationalism and maintain awareness of the wider issue. This works very well, no one character is morally unblemished and this makes for a nuanced play. The performances compliment this well, Maxine Peake does a brilliant job, offering a flawed but driven defender who toils in right and wrong. The supporting cast of matrons are all clear stereotypes which plays out well as this was needled to the point of collapse.

Maybe this is where it falls down, when the show isn’t showing off its clever dialogue, it is making very unsubtle comments. I agree with what is said, but I do think if you oversimplify a message it isn’t received well, audiences don’t like being talked down to.

Furthermore, while the first act shows signs of a show with a nuanced script, the second act is  a bit of a mess. Tonally it is very jumbled, and maybe this is intended to reflect the intensity of the situation, it comes off as being all over the place. The building rhythm of the piece is intriguing initially, only for the second act to scramble through plot points without giving them the attention they desperately need.

Overall, this show says good things, it presents them mostly well but it leaves a certain something lacking. If there is more cohesion between, acts, ideas and plot lines then it could have been great, but the inconsistency between tone, quality of writing and approach let itself down. 3/5

The Welkin is currently showing until Saturday 23rd May 2020 at The National Theatre. To find out more about the production, visit here…

« Previous post
Writer and Theatre Maker Damilola DK Fashola talks about her show ‘Fragments of a Complicated Mind’ showing at Theatre503!
Next post »
The Canary and the Crow @ The Arcola Theatre Review