The Canary and the Crow @ The Arcola Theatre Review

The Canary and the Crow at the Arcola Theatre in Hackney is a very impressive piece of ‘gig theatre’; a term I was previously unfamiliar with. On this evidence, Middle Child (a ground-breaking company from Hull), have created a potent hybrid of drama, direct address, chamber music, hip-hop and grime. It’s also dynamic, didactic, arresting and fresh and, without realising it, I’ve waited to see a theatrical development like this for a quite a while. 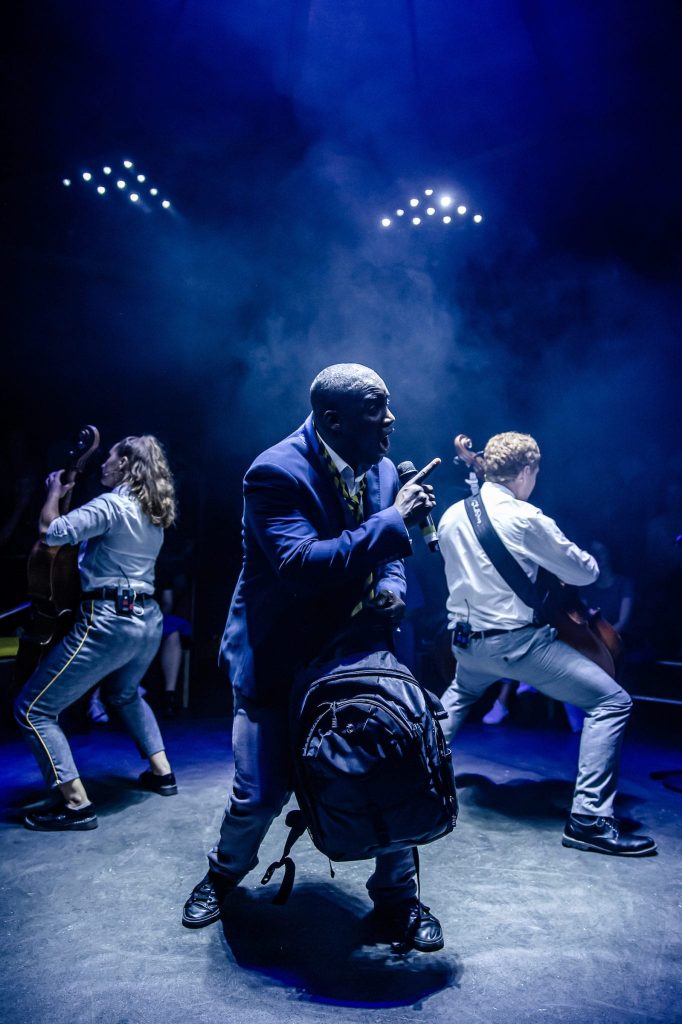 Story-wise, the trajectory of a gifted working-class male finding it difficult to handle his once-in-a-lifetime chance at upward mobility, as he finds himself ill-suited to his new surroundings and increasingly alienated from the old ones, is a fairly familiar one in British drama. Think of In Celebration, by David Storey, or Charlie Bubbles, by Shelagh Delaney to name but two; although adult-focused, class-based rejection and isolation is a social wound that goes way back. Add contemporary issues of identity and racism to the mix and the subject of self-improvement via education becomes even more politically loaded than ever.

Lead performer Daniel Ward, (aka The Bird), who also wrote this semi-autobiographical piece, wins a scholarship to a top, all-boy private school and encounters the kind of casual, institutionalised racism so many talented black people endure when joining the so-called ‘elites’. He is immediately mistrusted for his colour and his partial assimilation is arrived at primarily through pressure to conform (effectively coercion), and the indignities of being liked but heavily patronised by his largely white, upper-class schoolmates and teachers.

While he struggles with his education, Snipes, The Bird’s poor and increasingly angry older cousin, unable to survive on a dead-end zero-hours contract, descends into crime, desperately exploiting The Bird’s new proximity to wealth. An act of violence triggers the episode where The Bird is effectively asked to pick a side. His dilemma is acute and poignant. Home or school? Now or the future? The canaries or the crows? At this point, we see clearly the conflicting loyalties and compromises that this young black child must negotiate to fulfil his potential. There are no easy, pat answers. None are offered. And these questions continue when the author grows up and goes on to attend drama school.

Ward is excellent as The Bird, commanding the stage assuredly and proving to be an amiable, highly-watchable host. Nigel Taylor, convincing as the prowling, street-wise Snipes, is also a rousing musical performer. Rachel Barnes and Laurie Jamieson play their instruments and multiple roles with consummate skill and even when they stray into caricature, it’s well-observed and often very amusing.

I’m pleased to say this is unapologetically political theatre, adroitly directed by Paul Smith, who keeps the relentless pace flowing and the focus sharp and consistent. It is also genuinely funny and combines the raw energy and party atmosphere of a rave with the emotion and discipline of more traditional theatre forms. Two onstage cellos, an instrument more associated with classical music, blend beautifully with hip-hop and grime to create a unique soundtrack that accompanies and punctuates the action. Indeed, music provides the one area where all elements reassuringly fuse into a harmonious, edifying whole.

I highly recommend this enlightening, warm-hearted and stimulating evening. Go and see it if you can. The audience on the night I’m there love it. I’d also like to add, even though it’s rarely noted in these things, that the staff at the Arcola are particularly friendly and efficient.

The Crow and The Canary is currently showing until Saturday 8th February 2020 at the Arcola Theatre.  To find out more about the production, visit here…