Kuene and the King @ The Ambassadors Theatre Review

As the show opens, we are introduced to Jack Morris, an actor. We watch him learn his lines surrounded by photos of his glory days, however, it is not long before we see his frailty. 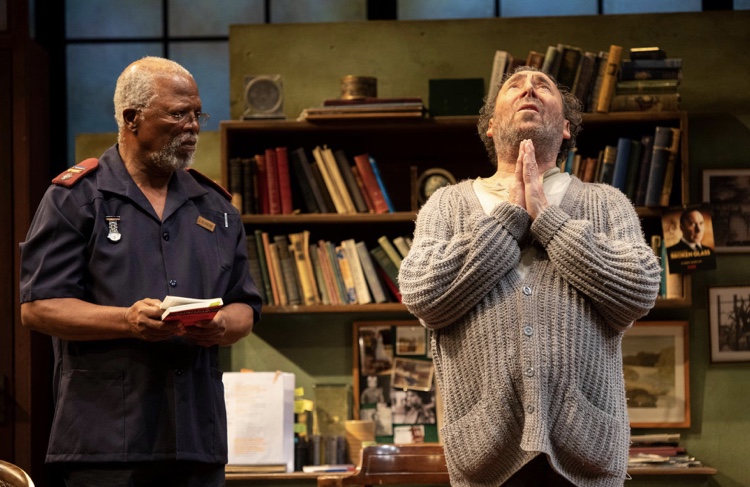 He is interrupted by a knock at the door from Nurse Kuene who to Jack’s surprise alone, it is a black male nurse. In Kuene’s words, ‘you were expecting a blonde white woman with big tits,’ to which Jack does not deny his expectations. We quickly realise that Jack has terminal cancer, living in denial of his illness, asking Kuene to stay with him, not until he dies but until he ‘gets better.’ His pain becomes more apparent throughout the show and despite Jack’s vulnerability, he makes his opinion on Kuene’s race very clear from the start, asserting his belief in the dominance as ‘white man.’ This is not the first time Kuene has faced this treatment, making it just as clear back that, ‘I don’t work for you, I care for you.’ Batting all demands and insults back without any nervousness of Jack’s current temperament.

The dynamic between the two characters flips between patient and carer, friend and foe, white man and black man, throughout the piece: one minute we are totally enthralled by the characters, the next shocked by their anger towards each other. The theme of Apartheid in South Africa is continuously present as both Jack and Kuene reflect on the democratic elections that had happened 25 years prior, escalating to a point of explosion. After they finish throwing their abuses at one another, we are left with just two men, similar age, both equally as familiar with loneliness and lose but from two opposing worlds.  The turbulent relationship between both characters was painful but heart-warming to watch, seeing this strange kind of friendship develop through the learning and love of King Lear.  As the play progresses, no matter the hatred he may feel, Kuene shows only compassion for this visibly dying man regardless of his past oppressions, reminding Jack that no matter what, we are all human, we all come to our demise everyone is important.

Kuene and the King is written and performed by John Kani, accompanied by the haunting vocals of Anna Mudeka which added an authenticity to the play. The script is raw and true of his own experiences, making the play even more powerful and careful direction from Janice Honeyman really brought out the play’s sensitivity. Both Antony Sher and John Kani’s performance was tender but joyful, showing the audience both anger and understanding of a hugely significant chapter in history through the eyes of two conflicting societies.

Kuene and the King is currently showing until Saturday 28th March 2020 at The Ambassadors Theatre. To find out more about the production, visit here…