The story of migration in some way or other affects us all, whether we’ve directly migrated ourselves or our relatives centuries, decades or years prior have had to make the move from one part of the world to another. A universal theme, migration is a facet of humanity that will continue to impact on many and shape their lives. Exploring this facet of humanity in his latest work for the Royal Opera House, Kibwe Tavares presents Aisha and Abaya – a tale of two sisters seeking refuge away from their war torn homeland. 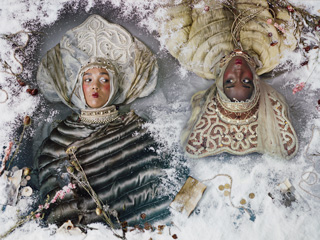 Part filmic experience, part dance show – Tavares’ tale places two regal protagonists at the centre of the action as they drift onto unknown shores. Salomé Pressac’s Aisha and Maëva Berthelot’s Abhaya with subtly explore their new found circumstance, a combination of graciousness and grit dominating the manner in which they tackle the unknown.

Chaotic oceanic expanses and earthy woodland landscapes rids Aisha and Abhaya of their once suggested royal past, their battling of the elements highlighting their grit – their battle with new ground the beginnings of their assimilation process leaving us all intrigued as to how they’ll fair.

Sharon Eyal and Gai Behar’s choreography forms the language in which the show’s ideas are expressed, the worlds of ballet and West African inspired rhythms combining to further highlight the princesses’ new found circumstances. A combining of culture, a questioning of belonging, a constant flux in emotions underpin the piece, the Rambert dance company tying the cinematic clips together with intensity and immediacy – giving the show its live element.

Tavares’ tale is split into four sections- Journey, Before, Journey and Out of the Comfort Zone, going against the typical linear narrative and going back and forth in Aisha and Abhaya’s migration journey to highlight the unpredictability of what they’re going through. The show’s continual sense of mystique leaves the audience wanting to know more about their story, this working for and against the piece – as a true connection with the protagonists is paramount for the story to resonate, however this isn’t truly realised.

An ambitious piece of technological theatre with many ideas; the show’s cinematic pieces the stronger element of the show. 3.5/5

Aisha and Abhaya is currently showing until Sunday 9th February 2020 at the Royal Opera House. To find out more about the production, visit here…