Temi Wilkey’s debut play is a tour de force, and cements itself in history as a keystone piece in the Black queer canon. It is truly sensational, and the entire evening’s performance is a treat from start to finish. Get yourself down to Bush Theatre to see this impressive work. 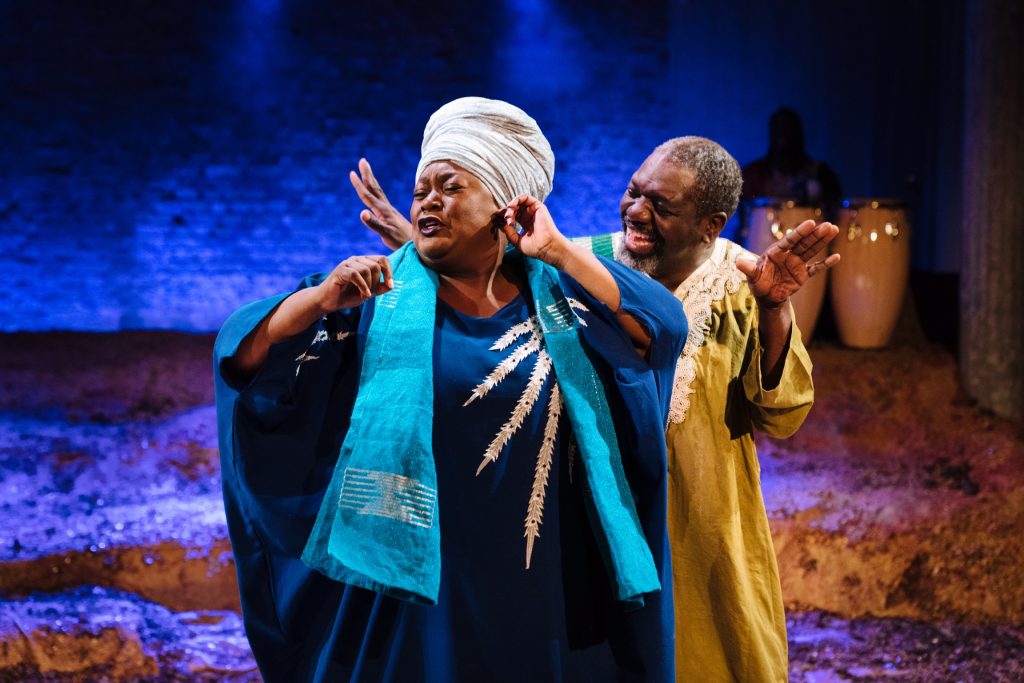 The story is a mixture of a contemporary queer love story, and a debate from high above. When Leah proposes, Tara has to properly come out to her family. They thought she was bisexual, meaning she could potentially settle down with a man. However, when it’s revealed that won’t be the case, their true feelings come out. The potential wedding causes disruption and disagreement to the family home.

Whilst this is happening, up high, long-dead ancestors meet up to decide Tara’s fate. They have the choice to approve the nuptials or not. Debate occurs between the four of them; all have different reasoning’s and lived experiences. You quickly learn that things aren’t so crystal clear after all. What Wilkey’s play achieves so superbly, is how it never paints one specific person as the total ‘bad guy’. Instead, the script shows the complexities of the subject, investigating how owning your truth can affect everyone around you.

Every performer is sensational – their energy for the work is contagious. The enthusiasm from each of them radiates from the stage. Daniel Bailey’s direction brings out total joy from the company. There’s fantastic drumming from Mohamed Gueye. One minute you’re roaring in hysterics, and then moments later you’re weeping. Wilkey’s script manages to take you on a turbulent emotional rollercoaster, constantly pulling the rug from under your feet.

This debut has really landed well. It’s a touching, unsettling and joyful piece of theatre, which will leave you feeling all sorts of things – the above all feeling being, hope. 5/5

The High Table is currently showing until Saturday 21st March 2020 at the Bush Theatre. To find out more about the production, visit here…