Every culture has their staple when it comes to cuisine, the West African staple being Jollof rice. Described as a ‘reddish one-pot dish’, at first glance it may appear to be a simple dish to cook, however its foundations tell a different story, as a beautiful amalgamation of tomatoes, peppers, stock and various spices work together to make the dish a well deserved staple! 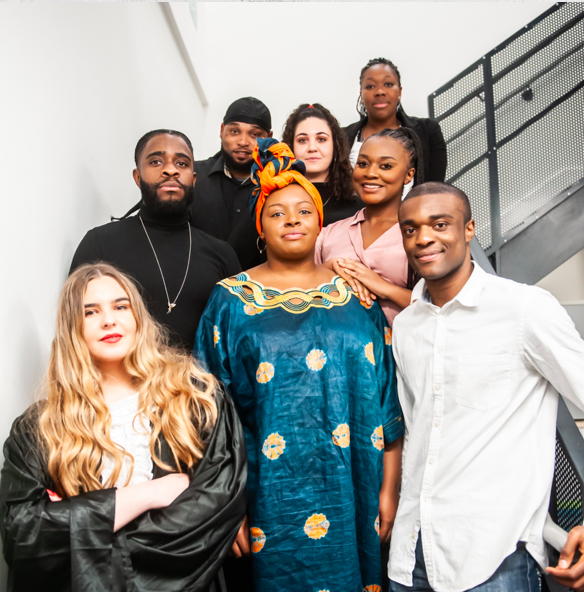 Every country has their own variation on the dish, this naturally creating the crux of the debate as to who creates the best Jollof. Observing this debate amongst both Ghanaians and Nigerians, Gail Egbeson’s Jollof Wars is a comical take, as three friends, one of Ghanaian, Cameroonian and Jamaican descent break down the significance of the cuisine. Maximus Morgan, Jasz Brown and Charmel Koloko’s effortless bond leaves you thinking you’re intruding on a genuine meet up – the evening the most authentic as these three play video games and find themselves discussing various topics.

Their meet up with girlfriends Steffi Igbinova (who is of Nigerian heritage and due to wed Maximus Morgan’s character of Ghanaian origin), Bayleigh Clark and Fatoumata Toure propel the evening’s debate further, as a meeting of minds heightens the clash. Stephanie Steven’s turn as Steffi’s strict Nigerian mother a fun yet relatable addition to the show, her pride for her cooking a display of just how intrinsic and significant the meal is, and the power cuisine has no matter the culture in bringing people together.

Jollof Wars doesn’t at all take itself too seriously, the evening’s court case a visible representation of a conversation that continues to evoke debate. Wiktoria Wabnyc‘s voice of reason, the judge for the evening, simmers tensions down and offers her take on how the issue should be resolved. Egbeson forms a playful structure, one that resonates with audience members of African heritage – including myself. There’s no winner, the debate is open ended and that’s the whole point, this is a look at how cultural similarities/nuances unify – crucial, especially during this politically divisive time. Watching a familiar storyline programmed as part of the Vault Festival is very refreshing to see and something I look forward to seeing more of. A humurous evening shedding light on a West African tradition, Jollof Wars welcomes all to participate and connect.

Jollof Wars was shown from Friday 14th until Sunday 16th February 2020 as part of this year’s Vault Festival. To find out more about the production, visit here…