Due to the Covid-19 pandemic, the Kammerspiele have been closed and it is uncertain when theatres in Munich will reopen. The current restrictions include the Easter holidays, which will end on 19th April, but there might be an extension. Like other theatres, the Kammerspiele provide streams of their productions via Kammer 4. 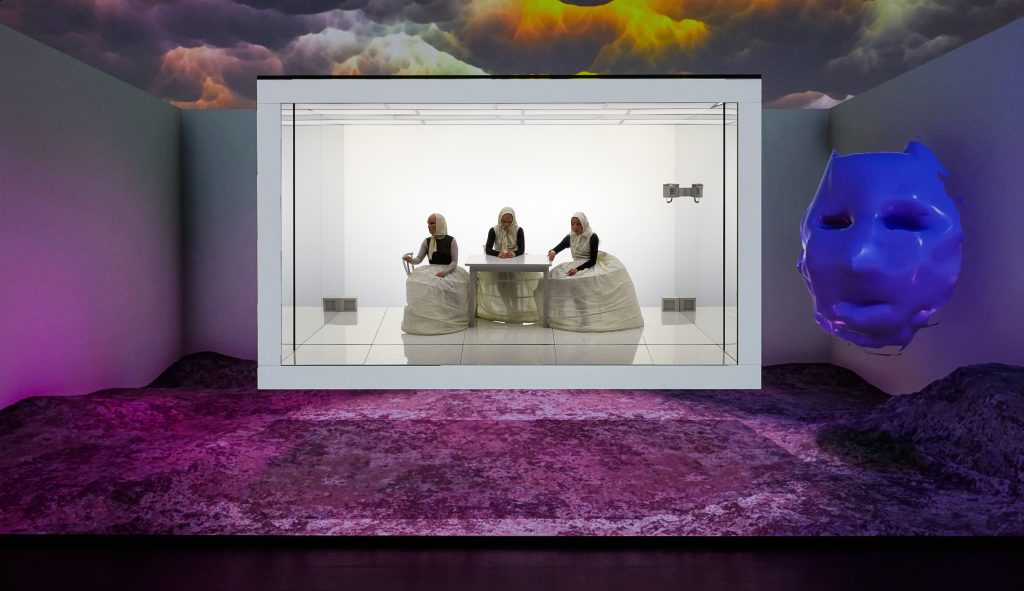 When Chekhov wrote Three Sisters in 1901, the pre-revolutionary bourgeois society was ignoring that radical changes were looming. They were focusing on themselves, whilst the working class was striving for emancipation. Masha, Olga, and Irina are part of this society. Living in the province, they dream of going to Moscow. Whilst the world around them is changing, they fear that their lives will remain the same and they will be forgotten.

Susanne Kennedy returns with a new and rather unique vision of Chekhov’s play, her premise based on the idea of “what if we lived a single moment of our lives over and over again?” Kennedy watches as the three sisters perform on myriad stages again and again, but their story never changes, as if they were trapped in an eternal loop. Inspired by Nietzsche, the director wonders whether we would make different choices if we lived as if our lives were endlessly repeated, if life was experienced forever.

Kennedy places the three sisters in a time loop with past, present, and future happening at the same time. In a linear timeframe, there would be hope for the future, but Kennedy sees time as a circle, leaving the three sisters trapped in circumstances they cannot influence, yearning for liberation.

Chekhov’s original text are radically altered for this production. The few remaining lines, along with trivial pop culture quotes, are recorded by speakers who do not know the context of their lines. Richard Janssen (sound design and voice montage) edits the recordings, using these different sounds to create his own composition. As often in Kennedy’s productions, language is taken from the actors and they are all wearing masks, which separates them from their bodies. There is no clear narrative, and there are no protagonists. Kennedy, together with stage designer Lena Newton and video designer Rodrik Biersteker create a journey through different digital worlds and conditions, aiming for a Gesamtkunstwerk in 41 scenes.

As the performance begins, a polyphonic groaning and sighing is filling the auditorium. The three sisters, clad in white hoop skirts, their faces covered with black veils, appear in a box that seems to float in a sea of clouds. They remain stuck in the first act of Chekhov’s play and are forced to endure variations of the same scene again and again. Sometimes the sisters are wearing their hoop skirts, at other times they are wearing neon-coloured turtleneck sweaters and jeans (costume design by Teres Vergho), looking like crash-test dummies with their bald heads and expressionless faces. The actors – Marie Groothof, Eva Löbau, Anna Maria Sturm, Walter Hess, Christan Löber, and Banjamin Radjaipour – keep on repeating the same lines in German and in English, occasionally interrupted by absurd dialogues titled “Reality” that introduce other topics. In one scene two stressed women talk about their boss and their deplorable love life. In another the essence of “genius” is discussed as we listen to thoughts about theatre and the circular form of time. A shaman also makes his appearance.

This production is visually stunning. Animated background images are creating digital worlds whilst a smaller screen disperses the actors into small pixels. Kennedy’s productions often remind me of art installations with a strong philosophical foundation.  Although her three sisters are trapped in a never-ending time loop, they do not seem too unhappy about living in a moment. 4/5

ATTENTION: Strobe effects are used in this performance.