Ralph Fiennes (Mark Antony) and Sophie Okonedo (Cleopatra) stand out in a fast-moving adaptation of the iconic tragedy. Slow to start and a little too traditional for my taste, it grows into itself, until tension boils over and the slippery language of politics becomes sharp and intense. 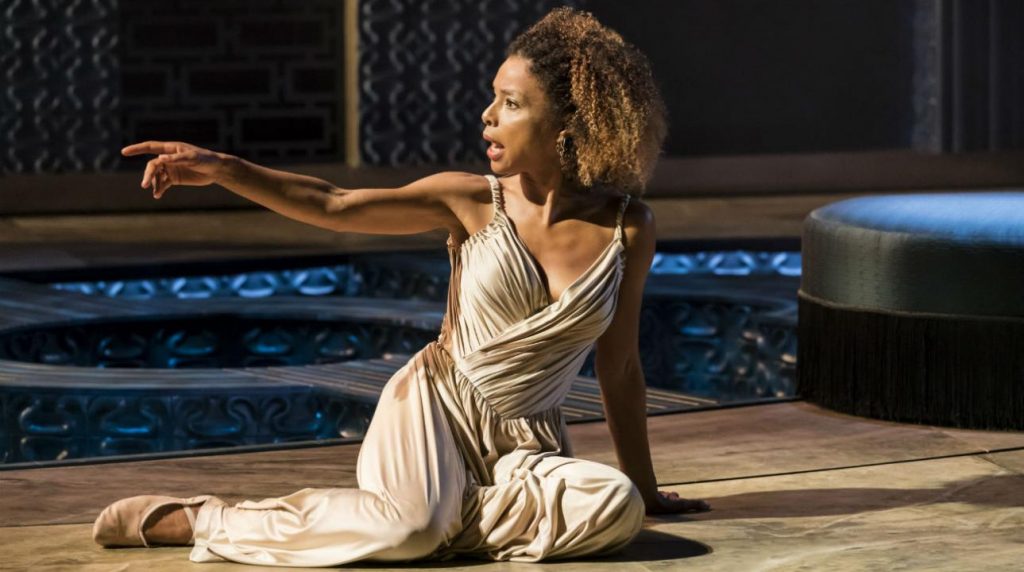 The individual performances are outstanding, the titular couple Fiennes and Okonedo outstanding in their chemistry; yet there might be something missing in this. The sycophancy is brilliantly brought out, the smarminess of politics also brought out to good effect and emblematic of Hildegard Bechtler’s ability to move the text into a modern context while drawing on the rich language of the text. It is through this that Fiennes’ outstanding inhabiting of character and Okonedo’s triumphant final act capture the building catastrophe at hand. The supporting cast has merit,  Tunji Kasim’s Ceasar smug and vindictive in a way that sets up the conflict brilliantly.

Mark Antony, Pompey and Caesar butt heads in the dance of politics; twists, turns and deception give way to conflict and betrayal, making for a compelling tragedy. The design shines in this piece. The set is split and rotates between scenes which parallels happenings in Alexandria and Rome effectively, although, it may be in danger of slowing down a script which flourishes in its speed and intensity. There are moments of heavy handedness in some of the dramaturgy and occasionally it could leave a few more questions open ended, but the pace picks up in the second act which works well. Despite the beautiful set and outstanding costumes, it is arguably at its best when the stage is bare and the acting is given space to breath. Perhaps it does become too lost in the aesthetic value and forgets what it is really about, alternatively, it makes for a well-rounded performance which balances the design with the text.

Overall, a show with brilliant acting across the board, the scenography definitely making for a compelling backdrop. However, underneath all this is something slightly off. For as modern the appearance of the show, it is a very traditional adaptation, and maybe that comes with Fiennes at the Olivier but it leaves a few things lacking. Perhaps I’m being too cynical, each aspect of this show has merit and it comes together brilliantly, I thoroughly enjoyed watching this. 3.5/5

Antony and Cleopatra was originally shown from Tuesday 18th September 2018 until Saturday 19th January 2019 at the National Theatre and was broadcast by National Theatre Live on Thursday 6th December 2018. To find out more about the production, visit here…

Antony and Cleopatra is currently streaming on Youtube until Thursday 14th May, 7pm.