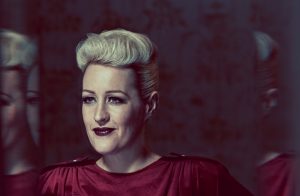 Returning with their debut season of online work, The Old Market present Reigning Women, a season seeing in a new era of work, celebrating both established and rising stars. Forming part of this important celebration, the aptly named event Phoenix from the Flames will front the season; an eclectic evening of music and spoken word featuring performances from Alice Russell, Scarlett Fae, Jenny Foulds and Phonetic. Ahead of the event, soul singer Alice Russell tells us how it feels to be back rehearsing and performing in a live space, what she’s taken away from this very unique point in time and what to expect from the evening.

Hi Alice, you’ll be taking part in TOM’s debut online event Phoenix from the Flames, an evening of music and spoken word performance. How are you feeling ahead of the event?

I’m just feeling excited to be performing alongside and with others once again! And that we are doing it as spring once comes around, it feels very hopeful and what we all need right now. To get back to some of the many things we love and that connect us to each other.

It’s been a crazy year for all, not only with the pandemic but politically as well. So now even more than ever its so important to be checking in with community, support local venues, each other. So It was a big yes from me as soon as I was asked to get involved.

Phoenix from the Flames forms part of TOM’s Reigning Women season, a celebration of both established performers and rising stars. What does it mean to be able to be a part of this celebration?

Reigning women! A very regal name, and looking back on last year’s festival such an important festival to share new voices (and old 😉 ) and to give that platform to all the kick ass women involved to do their thing.  I was honoured to be asked to join this year and then when I saw the line up, well I’m now just excited to see all the others perform!

What has the rehearsal process involved and how does it feel to be back in a performance space?

Well we had our first rehearsal today (Wednesday). Just the backing singers, me and TM Juke in the garden.  A very different rehearsal experience to our usual go-to fav Brighton Electric… less sweaty though.

It’s weird after all this time how everything just clicks back (a little wonky) but back into place again. It was just such a treat to be singing and harmonising with other real humans!

In a year that has been challenging for the arts, what impact has this had on your work?

For me, I was and still am hoping to get back to working on my new album. I have had a bit of a hiatus as have the two little ones, so mumma bear duties have meant finding the best way to work to get that creative head space that I need to get writing and making again. I felt I had just got the balance right at the end of 2019 – we had ramped up some time in the studio and things had just started to flow again and I was still there for my guys so a good balance had been found … and yes it was nearly finished this time last year. I have had to step back a bit but I can’t and won’t complain as I know I’m lucky. If this has taught us anything, it’s been patience and offered lots of time for reflection.

I’m so thankful that I went ahead and did the Roundhouse show in January 2020 as we got the whole band together and pretty much performed all the new songs at that show. I’m so glad we got the chance to do that, as who knew just how dramatic a change a month down the line for us all would become.  Lucky for me we didn’t have a load of shows in place planned for this last year as I would have felt terrible letting the band down and the peeps with tickets down.

How has the year shaped you both personally and as a performer? What have you taken away from this very unique point in time?

Wow this is a massive question. So much… For us firstly as a family and on a personal level, my partner usually works away most of the week and comes back Fridays, so for me – but mostly for the little ones – to have him around has been so good. Him getting furloughed and not losing his job is something I’m very grateful for – especially as we still get on!

A lot of reflection time and just feeling very grateful for what we have, and now an outside meet up with a dear chum for a cuppa is like such a golden treat. It always was but now… WOW! When we can all go and see some live music, dance – whatever floats your boat – when we can do that again… our little mind palaces and ears will explode! Not taking any of it for granted as it is such a gift! We must savour it all and remember we are a long time dead so…. I hope it has made us all see how good we have it.

There is a lot of political shit going on here and globally and society has a lot of changes to make. Everyone being at home meant that some very important issues that people can skirt over or look away from have come to the fore and amen to that. I’m a bit of an advocate of self reflection, getting therapy and sorting yourself out. I hope a lot of people have re-evaluated and used this time for reflection and change. A lot of us are just living with our head in the clouds, not connected to where we are or who we are around and it’s important to stay grounded.

Anyway! This is a big question for a beer and a sit and a good old chatter. I’ll have to save all my feelings for another time.

I do want to add that I know so many have suffered so much in this time and that I’m aware I can only answer from my experience. I have been one of the lucky ones thus far.

What can viewers expect from your set and the evening?

I have gathered 2 backing singers – Sophie and Chessie – as well as TM Juke on guitar, Ben Jones on keys and Mike on violin and vocals. We are stripping the songs back and will do one of the new album songs but mostly going back to do some acoustic versions. Lots of lovely harmonises and just us giving it what we got to give!

What would you like for viewers to take away from the evening?

I don’t want to sound like a corn bag but… hope. Hope that we are moving out of this strange time and back towards the things we love and cherish and the things we all like to share together. As always with any performance, we hope there will be a sense of connection to and with each other and a chance to hear and see some new performers doing what they love.

Phoenix from the Flames takes place on Thursday 1st April 2021, to find out more, visit here…