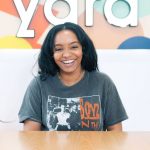 Due to launch this April, after envisioning the concept 5 years ago,  YARD Arthouse, formed by the MAIA Group, will serve as a community hub for locals to realise their ideas and projects. Based in Lady Wood, West Midlands, the venue marks the initial phase of a regeneration project that will also include an artist led hotel and cultural hub by 2023. Ahead of YARD Arthouse’s launch, MAIA Group co-founder Amahra Spence tells us more about what to expect from the venue, transforming her local neighbourhood and what her hopes are for the venue.

Hi Amahra, MAIA, a leading Black-led arts and social justice organisation will launch YARD Arthouse, a venue for Black and under-represented communities. How are you feeling ahead of the launch?

I’m feeling very excited, it’s been a really long road to get to this point. I set out a vision for an artist led hotel in 2016 which feels like a really long time ago, so getting YARD is like the phase 1 version of that so in many ways it’s like you know, we’re making this dream really real but it also sits in a neighbourhood that I grew up in. The vision coming to life in that neighbourhood, which has faced decades of disinvestment feels like a moment to really celebrate. Seeing all of the energy around the project already, I can’t wait to open the doors.

YARD Arthouse marks the first phase in an ambitious wider regeneration project involving the opening of a unique artist led hotel and cultural hub in 2023, What will these venues entail?

YARD Arthouse is an arthouse and residency space, which means we have two double rooms with ensuites so we can facilitate artists and residents and takeovers of the whole house. A lot of organisations and festivals have said “we’d love to put some programming in here, we’d love to host artists here”, so it’s definitely available for that purpose and we’re going to be bringing some artists and residents from across the world to come and stay in Ladywood which is really exciting.

The middle floor is made of a flexible project space, so people might use that for rehearsals, or photoshoots, or yoga or prayer because we’re in a really diverse, culturally diverse, religiously diverse neighbourhood. We want to leave that space flexible for whatever the community need it to be. We’ve also got a soundproof recording studio on the middle floor as well.

The hotel is almost like that, amplified. So what we’re doing is, we’re testing out what’s feasible, what’s possible in a really small space, what people take to in a really small space. It feels really important to mention that the hotel is going to represent something more than a hotel, it will have an auditorium in there for performances and events, it will have a community space, a large community kitchen, music studios, rehearsal rooms as well as work units, private double rooms and shared dorms for people who are staying with larger ensembles.

These phases will witness the regeneration of culturally neglected neighbourhoods in the West Midlands. What does it mean to be able to transform these neighbourhoods?

For us, it’s very important that it’s not a sort of top/down development, we want to be designing a space with the community, with the residents in every way – from what materials do we need to use in the space? To how does it function? What do we do with any profits?  All of those things. It feels really exciting to be doing that in a really empowering way in the community. Then there’s also something that, for years, there are people who have hopes, they have visions, they have ideas about what they want to see in their neighbourhood, but are disconnected from the resources to make those things happen. This is almost like a gateway into what would happen if we all had our ideas resourced? What would happen if we were all able to make our visions happen in the world? And we’re really going to need as we emerge through Covid, as we emerge through all of the impact of 2020. We’re going to need community infrastructure in a way we’ve never had before.

MAIA have collaborated with regeneration developer Urban Splash, a charitable trust who have supported with the first phase. What has the collaborative process involved for this?

The developers themselves, when they first announced they’ll be taking over this site, there were some buildings earmarked in the middle of the site, and they reached out to local people quite immediately, they left an opening for local people to get in touch with them and say what did they want to see in that neighbourhood. So our relationship started quite early on, around 2018 or so.

Eventually we started talking to the charitable trust of Urban Splash and we came up with this idea that we would take on a house and we’d create this venue from it and they’ve been really supportive in that process. They gave us a grant to cover our starting up costs, they’ve been really supportive with communications and marketing and supporting a lot of the activity, a lot of the energy coming out around YARD Arthouse.

But fundamentally, I think it’s because they really value and understand the role of place making, and that you can’t do good place making without doing that with local people. They’ve been investing in us and I think that that’s also particularly important because again, I am from the neighbourhood that this development sits in, I was born and raised there and all of my team are from that side of town. So for us to be able to do that in collaboration with a developer that understands that value and invest in it feels really important.

MAIA was co-founded by producer Amber Caldwell and yourself, a playwright, theatre-maker and producer. For over 8 years you’ve both supported Black artists across the UK, recently raising money with the West Midlands Coronavirus Impact Fund. What within that time have you learned in regards to the support that is needed?

There are some things that we knew even before doing the Coronavirus Impact Fund, for example, that we knew people were falling through the gaps of support, provided by the state, that a lot of people who are racialised, who are working class, who are queer, who are disabled feel often isolated or marginalised from institutions and spaces and resources that currently exist. So us starting out was very much like how do we centre the role of the collective? How do we centre community organising in all of that?

In many ways, Covid just exacerbated what we already knew was there, and for me, what feels like the most pivotal shift is that we really want to be creating spaces for joy and for freedom, and for togetherness, and we need to be doing that in an economically sustainable way because we can’t be reliant on state subsidy, grant funding, all of that because that’s the boundaries of as far as that can go right now. We know that because of Covid, because of where we are in the world, and where we are as a country, that resources are going to be even tighter as we emerge through Covid, so we have to be as community rooted as possible. We have to acknowledge that we have so much power, so much strength and so many resources, even within our own community spaces, so I definitely think that there’s something about harnessing that and I think for us because we’re a small organisation, we’re able to be agile, we’re able to be really responsive to people’s needs and that feels like a really important thing.

YARD Arthouse’s debut season of work, titled ‘Imagination SZN’ will launch online in April. What can be expected from the season?

Imagination SZN is a programme of talks, workshops, experiments, conversations around how we bring our imaginations into the world. We’ve got film screenings, an art exhibition with Ambient Jade which is going to be really exciting. I think it’s really important that we’re thinking about imagination from the context of the spaces that we inhabit, the lives that we live and who we are as individuals, and then who we are as a collective. It’s also really important that we’re thinking about co-creation and experimentation. How do we build the things together? How will we even use YARD as a site to experiment and build out that road to ABUELOS, the hotel, that we do that together with what we have right now. It’ll be really exciting, It’ll run from April 12thto June 11th, and most of it is going to be on Zoom, we’ve designed most of it to be online, and to do that as safely as possible. We have a few participatory things in the real space as we near to the summer.

What are your hopes for the YARD Arthouse?

I really hope people come to use it as their own, it’s like ‘from our home to yours’, it’s a place that everybody uses as their own home, that it is able to resource local people directly, local projects, local ideas. That it raises the belief, the possibility that we can actually create and build really ambitious things in our own neighbourhoods. I would love to see people go and create their own community spaces where they are, and find ways of using YARD almost like a blueprint to go and do that where they are and fundamentally, that people love it, that we’re able to be together in real space someday really soon and that people use YARD however they desire to use it.

To find out more about MAIA, visit here…

To find out more about the YARD Arthouse, visit here…