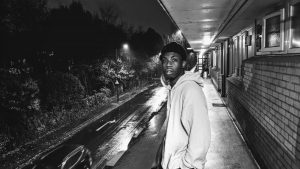 Initially performed last December at the Streatham Space Project – and comprising of a panel discussion exploring the show’s themes further, Imagiphoria Studios return with their production of Asò, an exploration of culture of identity. Ahead of the show’s run at this year’s Camden Fringe Festival, Artistic Director Mo Kerede tells us more about the show.

Hi Mo, Imagiphoria Studios will present Asó at this year’s Camden Fringe Festival from the 16th to 22nd August. How are you feeling ahead of the run?

I’m quite anxious to be honest. I know I’ve put on this show last year and it has grown since we started on Zoom, but I guess we’re moving to the big leagues now and I’m so blessed to keep this show going with a fresh new cast and different perspective.

Asó is a show about culture and identity, exploring the central question – ‘ How African makes you African enough?’. What inspired the company to explore this topic further?

As a Nigerian, born in London and raised between Nigeria and the UK, I guess this show comes from a personal experience. Finding identity not only is hard in society, but even more complex when it deals with the society you’re meant to belong to. So for me it was an opportunity to ask people who were African and from the diaspora, ‘What does it mean to you?’, ‘What does it consist of?’, ‘And how does that make you feel?’. The company is based in perspective theatre so any opportunity to show vast perspectives to an audience drives me and the company.

The show debuted last December at the Streatham Space Project, and included a panel talk with fashion director and journalist Zadrian Smith, Singer/Songwriter & Mentor King Cas, founder of AAKande Bim Akande and MSc, BA in Music Management and Law Pelumi Kanmi. What have you taken away from the experience?

And we are not alone, none of us are. From those who live here (UK) with family from the homeland. To those raised there. To those trying to find out where their originate from and what that means for them. We are all trying to figure out where we belong.

What has the rehearsal process for the piece involved?

A Lot of Zoom calls… too many to fathom. And then eventually an intensive 10 days of in person rehearsals.

A party, to laugh, to ponder, to connect, to find somewhere where they feel they can be themselves and belong.

A shot or two if you’re lucky, belly aches from laughing and a different perspective they may have never seen.

Asò will show from Monday 16th to Sunday 22nd at the Hope Theatre as part of the Camden Fringe Festival. To find out more about the production, visit here…