Composer and Sound Designer Nicola T. Chang and Actor and Writer Isabella Leung talk about their Audio Play ‘Mooncake’, playing as part of the ‘Written on the Waves’ Series 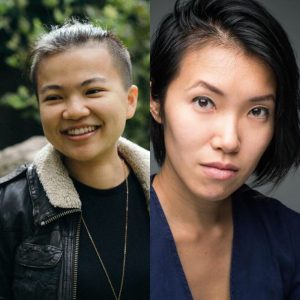 An audio experience formed last year during the pandemic as a way of connecting with listeners, season 1 of Written on the Wavesby 45 North has already received over 5000 listens across 40 countries – showcasing the project’s reach. Soon to release season 2 of the series, the platform will showcase the works of 6 creatives, including Mooncake created by Nicola T. Chang and Isabella Leung. An audio drama revolving around conversations and events had around the delicacy typically enjoyed during the Mid Autumn Festival, Mooncakeplaces the stories of the South and East Asian community to the fore. Ahead of the release, Nicola and Isabella tell us more about what to expect.

Hi Nicola and Isabella, your project Mooncake will be available to listen to from 22nd July. How are you feeling ahead of the release?

Nicola: super nervous! It’s the first time I’ve ever written and made anything (I’m a sound designer) so I’m very unsure how it’ll turn out. But I also feel really proud of the work that Bella and I have made with the cast.

Isabella: I am also super nervous, but also very excited, just basically a lot of adrenaline running! I have a lot of faith in Nicola’s sound and the cast’s performance, yet, it is a fresh new piece with a quirky style, so it’s like diving into the deep you know.

Mooncake is an exploration of the conversations and events had around the delicacy, typically every full moon, yearly. What inspired you both to explore this further?

Nicola: I was prompted to create a sound-led piece by 45North. As a sound designer and composer, often I’m brought on-board to an audio play in post-production phase, meaning I don’t get to be as involved in the conceptualisation and in conversations about how sound can “show” rather than “tell”. I spent about 2 weeks brainstorming ideas when I chanced upon a metal tin of cookies when shopping, and thought – wow, it must be super fascinating to explore a sonic environment inside the tin!

I landed on mooncakes because it’s a very much celebrated food amongst the East-Asian community, and I think back to how it draws families and friends together during Mid-Autumn Festival. I wonder about the conversations had around it, but also the conversations that must be had around the making of it in the kitchen and when it’s being taken from hand to hand.

Isabella: I remember having a ‘little’ zoom chat with Nicola at a very early stage of development. It was quite unexpected really: ‘Hey, Bella, let’s talk about mooncakes!’ OK, let’s! We started at 9pm and chatted until midnight! We were brainstorming ideas around mooncakes, talking about our home, Hong Kong, and our families there, then relating those snippets to our experience here in London. Without realising, a ripple of familiarity and joy from this delicacy somehow just landed upon us.

How have you both collaborated to realise the audio play?

Nicola: I knew pretty early on I needed a collaborator that had both writing and theatre-making experience. As a sound designer, I was persistently interested in sonic environments, and the changes between them, but I struggled to write down any dialogue and to create story.

Both Bella and I are from Hong Kong, and have worked together previously across different projects, so it was incredibly fortunate that she could be on-board! In creating mooncake, I would first pitch environments (or settings!) to Bella, who would then create scenes and dialogue around them.

Isabella: I am a storyteller, so while Nicola was suggesting concepts and scenarios, I’d come up with narratives, story structure dialogues. We complement each other in this way. Because mooncake is ultimately a food about family, and with both Nicola and I being far away from home, we both pulled a bit of our own family stories into creating mooncake. I think the shared love of Hong Kong and family is most apparent in the Cantonese dialogues: we’d be going through the script and nodded ‘yes that sounds like my mum’.

We got some fantastic dramaturgical support from 45North, who constantly pushed us to try new things, and gave us loads of room to play. Once Nicola and I started experimenting with sounds, we added a new layer of perspective to the narrative: the perspective of the ear! We began to test proximity, space and movements. We’d schedule some ‘do whatever we want’ sessions to have a walk on the street, record stuff inside a tin can, listen and laugh. These were all new to me, which kept me on my toes!

Mooncake is performed by Heather Lai (Michelle), Tony Tang (Dad), Rebecca Yeo (Joey) and Michelle Yim (Mum). How have you worked with the cast to realise the show?

Nicola: I think the most rewarding part of this process is how the cast have resonated with the text and drawn from their own experiences. All our performers are of East Asian heritage, and the dialogue – which Bella has so skillfully written – is laden with the cultural nuances that we all grew up with. Also, as this piece explores what we can piece together from an eavesdropped story, there’s a huge improvisatory element to it. We basically introduced the characters in the play to our cast and sort of let scenes play out!

Due to the recording technique of the piece, we had to do a lot of scenes in one take for continuity though, which made all the sessions super intense.

Isabella: I honestly could not have imagined this piece come to life without this fantastic cast! Like Nicola said, they were super intense recording sessions, but the actors came in ready and committed, and are as mooncake-loving as we are.

The collaborative process involved directing the actors with some of the intentions behind the words, but they also brought their unique qualities to the roles, which was a pleasure to discover. For example, Tony’s (Dad) role was relatively smaller, but Tony’s bright and comedic tone gave the character so much life, I couldn’t stop laughing in our run throughs.

Ultimately, I felt that we all came together to share a story about who we are and where we’re from, and it’s a celebration!

How have you both found creating work for our digital age? What have you learned/taken away from the project?

Nicola: As a sound designer/composer I’ve designed quite a large amount of audio plays over the past year during lockdown. This has been the most exciting process I’ve yet experienced, as now sound and sonic environments take the lead. Often I find that I’m involved during the post-production process, and a lot of what I design is hence reacting to the story rather than motivating story.

One: people of a culture tell their stories best. A lot of the design choices I made and the sound effects chosen were a result of my upbringing in Hong Kong and my experiences as an East-Asian woman in the UK, and I wanted listeners from Hong Kong to spot their stories within mooncake.

Two: design-led work is terrifically exciting, and I would look forward to more projects that allow designers to tell their own stories too – designers come with a wealth of lived experiences, and I’d be so keen to hear and see more of their lives!

Isabella: I am still finding my way around creating digitally. I work across platforms: writing/acting/devising work, and so it has been rather challenging to create or collaborate without that face-to-face stimulation. Even with writing, I have previously written with the intention for my work to be performed by live actors to a live audience, so when it came down to creating digitally, I am still adapting as I go.

mooncake has really opened my eyes in terms of audience perception. I think my ‘ding’ moment was when I heard the playback of Nicola’s recording from the tin can (where the mooncake lives), I was stimulated in a new way: this is what I am hearing, this is close to me and I can interpret it as my own. I think the takeaway is that digital creation gives the audience individual experiences, and there is something safe and personal about that I really like.

Another massive takeaway is the fluidity of collaboration. Nicola and I were hands on with things we wouldn’t normally do, especially the logistical sides of things! But amidst all these, the creative driving force and trust were so strong that we were able to pull everything together, shared responsibilities and supported each other along the way. I think sometimes creatives don’t know how capable they are until they just go for it. When you do go for it, the reward is even bigger.

What can listeners expect from the audio play?

Nicola: Hopefully a lot of interesting sounds! They can also expect to keep their ears open as there’s quite a big palette of sound events in the piece.

Isabella: It is a journey dedicated to the food for your ears.

What would you like for listeners to take away from the play?

Nicola: I would like listeners to open their ears and to listen to the world around them, and to see the impact that Anti-Asian Racism has had on the East and South-East Asian Community over the past year.

Isabella: I would like listeners, especially those from the East and South-East Asian Community, to find comfort and solidarity from the play. Hopefully it would inspire them to listen and get involved in more bold and provocative work.

To find out more about Mooncake and the Written on the Waves series, visit here…