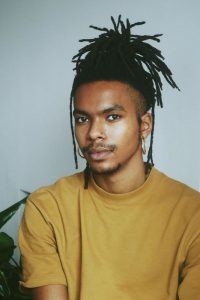 An era within theatre focusing on voices and perspectives often unheard, we’re witnessing important conversations, movements and art works responding to this need for representation on our stages. Told through a Black queer femme lens, babirye bukilwa’s production cake places the stories of the show’s two protagonists centre stage. Currently showing at Theatre Peckham until Saturday 7th August, the show’s director malakai sergeant tells us more about what inspired them to take part in the production, realising the show’s visual language with filmmaker and photographer Seye Isikalu and the importance of creating the production with an all Black and majority queer team.

Hi malakaï, you’ll be presenting babirye bukilwa’s production, cake from mid July until 7 August at Theatre Peckham. How are you feeling ahead of the run?

It’s been a real journey. At this point, I’m just looking forward to audiences being transported into the world of Sissy and Eshe. It’s long overdue that we have an intergenerational story solely featuring two dark-skinned Black, queer femmes on a stage in a play that isn’t actually about any of those things (per se). Representation and the politics around it these days is really boring, so more than anything I’m really excited to shatter people’s expectations of what the show “represents” and why it’s “important” – and hopefully I get a chance to be privy to the conversations and actions that come as a result of …cake.

cake ‘is a story told through a Black queer femme lens that interrogates the meaning and function of love and self worth in an exploitative climate of working-class London in the noughties’. What inspired yourself to explore this narrative further?

It’s a narrative featuring characters that I know and can empathise with, and therefore it’s a narrative I know is not often told with the delicacy, tenderness and care that it deserves. Sissy is the aunty in Brixton Market doing the most with earphones leaking down her top, Esheis the quiet younger cousin who you know you should probably talk to more. We know these people, we see them everyday, so why haven’t these stories been brought to life on a stage in a humanised way? Black, queer femmes’ lives by nature of this coexistence of identities is a particularly unique experience to articulate and capture. babriye’s writing does this – it’s brazenly unapologetic and deeply poetic, pirouetting around all of these mammoth themes in this incomplete language [English] that tumbles out of our mouths. To do that takes skill.

I wanted to utilise the resources I had access to in my role as associate director at Theatre Peckham to nurture babs’ writing to get it to this point through giving notes on the script, facilitating R&D periods with actors and testing it in front of a live (socially distanced) audience last autumn as a rehearsed reading. For the Sissys and the Eshes.

The cast includes performers Danielle Kassarate, who plays Sissy and Donna Banya who plays Eshe. What has the process involved in terms of realising the show?

Lots of breadsticks. And dips. But also a lot of sensitivity. I led a really collaborative process that invited all of the creative team to participate in initial discussions we were having about the text, which led us to surprising and provoking places. Our entire creative team is Black, which means that we didn’t have to hide as much as we may have to in other work contexts; we had the freedom to be our full selves the whole time. This meant we also didn’t have to explain elements of our upbringings to each other, so when things did get touchy, we were able to take breaks and take the time needed to hold each other. For me, the work of interrogation requires empathy and compassion, and this has to extend towards ourselves too – especially when dealing with a story where there are so many universal elements Black folks can relate to. Working with Jocelyn, a wonderful Black femme healer and consultant who founded Our Naked Truths, has been brilliant; during the rehearsals and production she’s met with the cast and creative team for intimate sessions to discuss anything that the process may be flagging up for them which has enriched the entire ting.

The creative team has been superb, I can’t even. This team is to die for, I will run in front of an ice cream van for any of them. We all worked as an ensemble while time seemed to stand still for us. Lots of iterative conversations to bring to life all ofthe elements – set, sound, lighting, even scent. They would then go away and come and we’d talk through ideas until they amassed into the tangible realm. Biggest of praise to Xana, Debbie, Luke, Kayode, Rema, Ezraand Phyllys. We should form a band.

The production’s images have been taken by photographer and film-maker Seye Isikalu, who has photographed various celebrated creatives within the industry including Sir Steve McQueen. How were you both able to collaborate to realise the show’s visual language/storytelling?

Seye is another member of the band, oh my days. His eyes were sculpted by the gods because he can make anything look angelic. For the marketing photos I had an idea of the essence I wanted the images to give off, so I created a moodboard for Seye and sent along some references I thought may be useful. We played around with lights in the space on the day and I kind of floated in and out of his ear like a sexy fairy whispering sweet nothings (and directorial notes) into his ear as he captured Daneille and Donna. The rest was up to him and, rah, what a ting.

The creative team comprises of an all Black, majority queer team. What does this mean to yourself and how have you found creating the show?

It means honesty. Dignity. Transparency. Understanding. Chaos. Silence. Liberation. Freedom. Empathy. Compassion. Abondance. Choice;choosing to be here, choosing presence, everyday, because that’s what babs’ writing requires and that’s what we all chose to be and do. All of that has been integral to the show’s creation, as it should be for everyone, everywhere. It’s peak that when you exist outside of binaries and refuse to create work for the white, hetronormative gaze, you tend not to get afforded those privileges while working on a project. I don’t understand why these are “privileges” in the first place because I can testify first-hand that the creativesI worked with on…cake– and those who share our identities (that are only “complex” to certain demographics) –deserve this all the time. Pay Black queer people to tell our stories and we’ll do the job well; there are enough of us here to tell our own stories from a place of authenticity and truth, as opposed to them being given to people without our lived experience who run the risk of being voyeuristic or patronising.

cake is currently playing until Saturday 7th August at Theatre Peckham. To find out more about the production, visit here…

« Previous post
Co-Founder and CEO of Marquee TV Simon Walker talks about their digital platform
Next post »
Composer and Sound Designer Nicola T. Chang and Actor and Writer Isabella Leung talk about their Audio Play ‘Mooncake’, playing as part of the ‘Written on the Waves’ Series