Said to be the blueprint of many of the classics we are familiar with today, 4,000 year old Egyptian poem Sinuhe and the King receives an adaptation from critically claimed Nigerian writer and poet Ben Okri OBE. 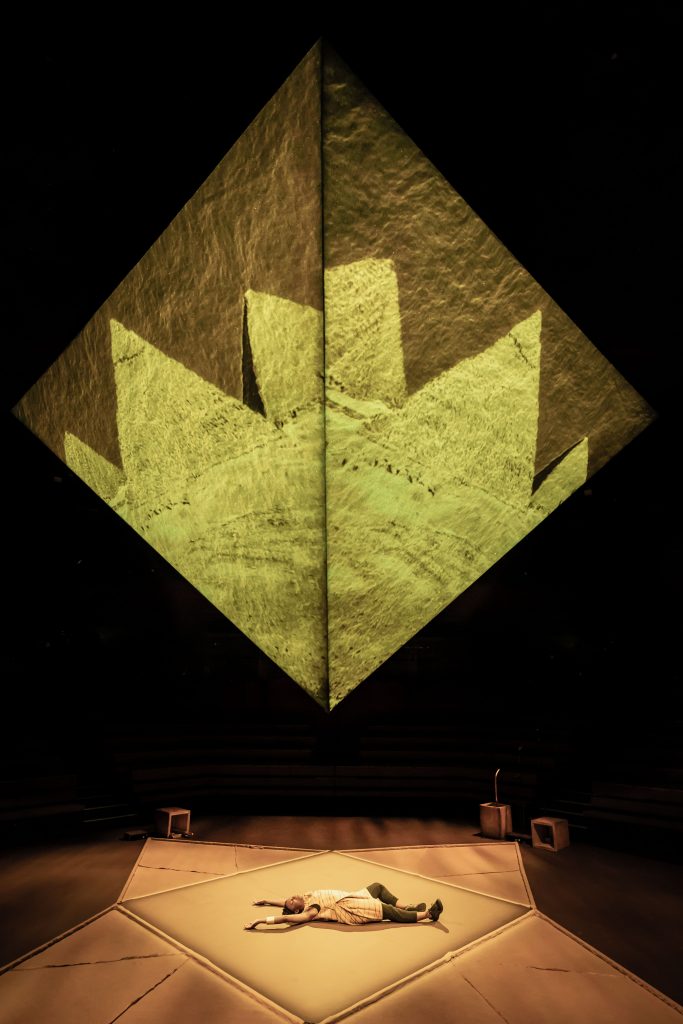 Upbeat in feel,  Changing Destiny constantly ensures all are entertained, Joan Iyiola and Ashley Zhanghaza’s self assured performances illustrating Okri’s elaborate, defiant text, speeches breathing life into the great landscapes and kingdoms established thousands of years ago – nobles, royalty, citizens and passers by all brought to our contemporary stage.

Sir David Adjaye and Adjaye Associates’ Egyptian inspired upside down/upright pyramid staging provides a striking focal point for the evening, all of Changing Destiny’s action taking place around it. Duncan McLean’s mesmerising video projections, in which we witness visuals of sand disintegrating into various eye catching images from hieroglyphs, to names of African countries and cities to of course the pyramids themselves playing out on the upside down pyramid above, the pyramid underneath unveiling a foundation that the characters inhabit – a genius way of highlighting the scope and ambition it would have taken to build the pyramids themselves.

Kwame Kwei-Armah‘s production is vivid and athletic, Rachael Nanyongo binding the production together with sequences inspired by Northern African tradition to the more war-like, strong in presence. Changing Destiny is fun, we capture onto the story’s sense of adventure, the show zoning in on themes of alienation and isolation and what it means to live a nomadic life. A tale about leaving a life of luxury to start all over again, it asks of the lead to evaluate what’s most important to them. Themes of mental health, love and spirituality explored also, Okri is able to capture the tale’s rich nature. A lovely welcome back to live theatre.

Changing Destiny is currently showing until Saturday 21st August at the Young Vic Theatre. To find out more about the production, visit here…

« Previous post
Writer and Performer Benjamin Salmon talks about his show ‘Blowhole’, to show at The Pleasance
Next post »
…cake @ Theatre Peckham Review