Writer and Performer Benjamin Salmon talks about his show ‘Blowhole’, to show at The Pleasance 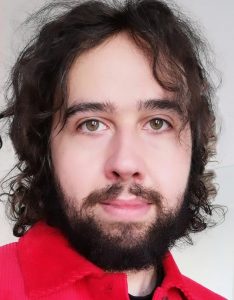 Recognising the need for honest stories placing the experiences of the queer community navigating the dating scene centre stage, writer and performer Benjamin Salmon presents Blowhole, an exploration of connection and community in the modern age of serial dating, a story about ‘Him’, a single, sexless, grief stricken gay man in London. Ahead of his show, taking place at the end of August at the Pleasance Theatre, Benjamin tells us more about the importance of creating these stories, collaborating with director Tom Wright and what he’s learned from creating the show

Hi Benjamin, your show Blowhole will play at the Pleasance from late August. How are you feeling ahead of the show?

I’m terrified! It’s definitely rooted in excitement, but I am absolutely feeling those sorts of nerves that come when you’re doing something that means quite a lot to you. But, luckily, I think that’s a good sign. I think it’d be concerning if I didn’t feel the nerves. The nerves, I think, are symbolic of how special this play means to me, and how special I think it will be for the audiences who come see it. After the year we’ve all collectively had, the thought of sharing this story with audiences, making them laugh, and making them fall in love with the character, Him, like I have, as the play’s writer and performer, is just such an exciting prospect. I am terrified, but also very excited for all of it.

Blowhole is an exploration of connection and community in the modern age of serial dating, it tells the story of ‘Him’, a single, sexless, grief stricken gay man in London. What inspired you to explore these topics further?

Quite frankly, I just didn’t see anything in theatre, television, film, the wider culture, that actually explored the reality of how bitterly disappointing it can be to be queer, single, in your twenties, and navigating the queer landscape of hook-ups, dating and relationships with no real skill or help. The closest thing I’d see to that were stories based in the past that didn’t feel particularly relevant to now; or stories that centred on characters who weren’t queer; or stories that grossly overestimated the glory and success of queer people’s sex lives. Nothing in the wider culture felt indicative of what me and my friends were experiencing. None of it felt particularly truthful. That was the main provocation to start writing Blowhole, as well as to explore the comedy that instinctively comes from this reality of how crappy your twenties can be – which is equally painful and amusing when you’ve perhaps waited your entire life for your twenties to start and for life to finally start feeling exciting. I think grief and love and sex all tie into how we allow (or don’t allow) ourselves to be vulnerable. When I took stock of how fascinated I am by those things, the character of Him quite quickly revealed himself to me, and it was then just full steam ahead in terms of crafting his story and the play that he finds himself in.

You’ve said that “I think that it’s about time we allow queer characters to rise to the forefront in a way that they’re not just an accessory to a protagonist of another story – that they are, instead allowed to take up the space within their own, messy complicated stories”. What does it mean to be able to stage this piece?

It feels GREAT. My God, it feels really exciting actually. As a writer, actor, creator and just as a human being, I’m really not intrigued or interested by shiny, happy clappy perfection that’s everywhere and shoved down our throats all the time by social media and perhaps by some weird people IRL. None of that “perfection” feels relative to my lived experiences, and I’m just naturally drawn to the stuff in life that feels real and authentic, which is often the things in life that feel exposing, messy and chaotic, but also hilarious, relatable and reassuring of what it is to be human. And to centre a queer person in that creative space is just so liberating. There’s something that feels really “punk” about that and, in turn, really gripping and exciting for an audience to invest in. That juxtaposition and conflict of this really funny, quick witted, rather fabulous gay man experiencing these things in life that do not feel particularly fabulous is what so much of the comedy lies in, but is also the root of how audiences relate to and fall in love with Him in the play.

The show is directed by Tom Wright, what has the collaborative process involved?

It’s involved a lot of laughter. We both recently realised that so much of the rehearsal process and dramaturgical process has been rooted in making each other laugh, and daring to put something in the play that feels really outrageous, but just really funny. It’s been an absolute gift to have Tom come on board as director onto this, because he’s the kind of director and creative who gets under the skin of what you’re trying to say, as a writer, and why you want to say it. But it’s also that joy of finding a creative accomplice who cares about your work and so viscerally responds to your writing in their own individual, creative way – all of that brings your play to life in a way you couldn’t imagine back when you were writing early drafts. And that’s a really cool feeling. The two of us do really work hard, but we also just have so much fun together in a rehearsal room. It never feels too much of a hardship – which is a feeling I want to feel more of when working on anything in the future, to be honest.

To be brave – even if you don’t feel particularly brave. And to remember you’re doing this because it’s fun. The process, so far, has felt a lot like the play, itself – really fun but also quite vulnerable (in a good way). I’m learning though to just lean into all the feelings during this rehearsal process. Rehearsing a one person play definitely feels overwhelming and scary from time to time, but that sense you get that all the hard work is beginning to pay off is a really exciting thing to feel. We seem to be making a show that feels genuinely exciting and entertaining, but urgent. And that’s just fab.

Audiences can expect a lot of laughs. A lot of jokes about hairy arseholes which I’m very proud of. They can also expect to fall in love with a really funny, witty, clever, slightly wobbly protagonist. They can expect a story that refreshingly goes against the stale standard rom-com format. They can expect all the things that happen on a really good night out – a lot of laughs, a little cry, and that reminder we all need sometimes of all the good stuff in life worth staying alive for.

That really will be up for them to decide and go through, but I hope they take away a lot of love not just for all of Him’s vulnerabilities and wobbles, but for their own personal vulnerabilities and wobbles. I also hope audiences take away the reminder or realisation that the most important relationship in life really is the one you have with yourself. I think the best theatre reminds you of what it is to be human – the good bits, the bad bits, all of it – but it also reminds you of why life is worth living for, no matter how painful, frustrating or heartbreaking it can sometimes be. If Blowhole can help audiences to find as much of that as possible, then it would make me very happy.

Blowhole will show from Tuesday 31st August until Saturday 11th September 2021 at The Pleasance Theatre. To find out more about the production, visit here…