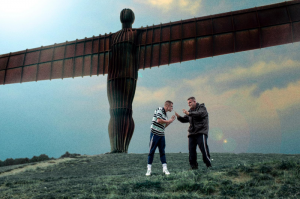 Having identified a need for a theatre venue supporting new writing and working class artists, Olivier award-winning theatre producer Jamie Eastlake and filmmaker Stephen Robertson have established Laurels Theatre, located above Laurels Whitley Bay tapas bar based in Tyne and Wear. Currently into their first ever season of work, co-founder Jamie tells us more about what it means to be able to provide this integral platform for creatives and what his hopes are for the venue.

Tired. It’s been a massive feat getting all of this up and running. We took over W dilapidated building and were told we’d need at least half a million to do what we wanted to do. I’m not going to go into details about just how much we did it for but it wasn’t that amount so you can imagine how much of the work we had to do ourselves. But it exists and it’s alive!!

Situated above Laurels Whitley Bay tapas bar, the fringe venue is located in Tyne and Wear. What has the process involved in terms of establishing the venue?

I opened an arts/tapas bar down the coast during the pandemic and even with everything the last year few years has thrown at us it worked so the plan was to bring the same model but on a bigger scale with a full time theatre attached to it. The response has been so lush from locals in Whitley bay but now it’s about to kicking on. Making excellent work. Developing artists and ensuring this building is the best alternative night spot on the NE coast.

What does it mean to be able to continue providing a platform for creatives to showcase new work?

It’s invaluable. My organisation (which started in London) has always been about that exposure. It’s so difficult to get into buildings. I found it so hard so thought “Well I’ll just have to be the one making the buildings then for other people to break through” I’m sick of seeing the same old stuff being put on. We don’t need another rendition of the same play again.

The venue recently launched its autumn season with ‘Waxa Belta Helta Skelta’ by Geordie artist Serena Ramsey. How have you approached curating the season?

It’s 80% local work. 20% work coming from afar. We want to support artists around us and give them the platform but at the same time bring voices who haven’t necessarily reached other regions and programme them. “Simple storytelling done in a mint way” is my mantra. This building should be the start of a productions life or the start of a comics career. We want our audiences to say “Eeh remember when we saw them at Laurels and look at them now!”

What are your hopes for the venue?

I want a show developed here move on to the west end and then Broadway. Why not? Working class people from the North East are told to stay in their lane and go get a job in a factory or whatever and live out your life with a mortgage, 2 kids and a car on tick. I want artists who don’t want that lifestyle to be propelled into the big time. I went down to London in my overdraft. Produced 40 shows. Programmed over 300. Won an Olivier. It can be done. Now it’s our time to do it here.

What can audiences expect from the venue?

A proper piss up. Mint food. The footy on when the Toons playing. My mates up here see theatre as this snobby higher class night out. I want it to be a bit filthy. To be about the whole experience. Why can’t a group of lads drinking a Stein watch the early kick off on a Saturday then fall into the matinee of a show on in the theatre space. That sounds like a class day out to me.

What advice can you give to aspiring theatre owners?

Whatever you think it’ll cost. Times it by 10.

To find out more about Laurels Theatre, visit here…