The Kammerspiele presented the world premiere of Heart Chamber Fragments, a production by Paper Tiger Theater Studio, an independent Chinese theatre collective. Founded by Tian Gebing in Beijing in 1997, with a branch in Berlin for the past two years, Paper Tiger includes artists from different professional backgrounds in dance, theatre, and the fine arts,who get together to develop theatre projects combining theatre, performance, and dance. As stated in the program, their focus is on the reality of everyday life and its brutal absurdity. 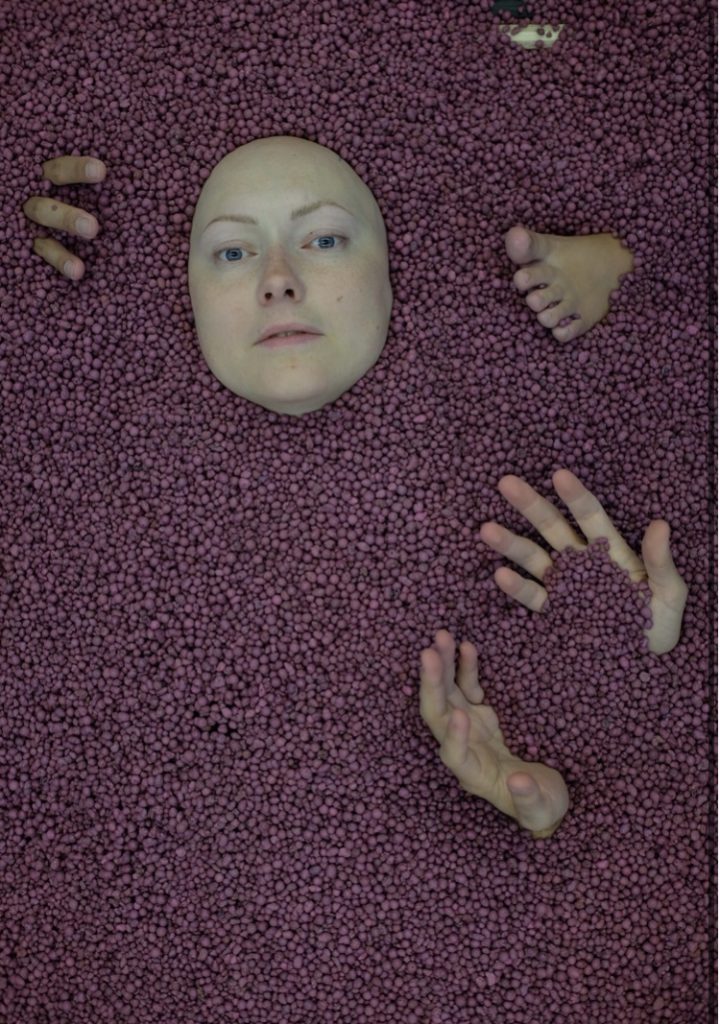 Directed by Tian Gebing, performers of Paper Tiger and the Münchner Kammerspiele joined forces to conduct performative research in the labyrinthine burrow systems underneath the skin, underground, and in our own language, accompanied by three very different texts: The Burrow by Franz Kafka (1923), Jean-Luc Nancy’s The Intruder (1999), and a 1700-year-old Classical Chinese text by the poet Tao Yuan-ming: The Peach Blossom Spring.

As the audience enters the auditorium, the performers are sitting on chairs in a circle, playing catch with a red ball and rolling a smaller red ball to each other, whilst Erwin Aljukić elaborates on the specifics of Kafka’s first manuscript The Burrow. The audience is seated on three sides. The name of the play is displayed above the stage in Chinese characters, whilst German, English, or Chinese surtitles are projected,whenever needed, to understand the spoken text.

The performance is divided into four fragments, beginning with The Burrow. Kafka sees the burrow as a person, as body and space enter each other. A complex security system is developed to repel possible intruders from the outside as well as from the inside. Accompanied by rhythmic and meditative music by Piotr Kurek, the nine actors – Erwin Aljukić, Svetlana Belesova, Liu Chao, Stefan Merki, Manel Salas Palau, Cindy Ng, Komi Togbonou, Wang Ya ‘nan, and Martin Weigel – form groups or pairs to explore the boundaries of their bodies and their own selves. Their bodies and movements become a metaphor for the text.

Safeguarding against unwanted intruders is also the topic of the classical Chinese text The Peach Blossom Spring by Tao Yuan-ming from the 4th century. As a wanderer enters a cave beyond the Peach Blossom Forest, he finds a utopian village that seems to be locked in time, unknown by and oblivious to the outside world. He breaks his promise to the village elders and quickly tells the authorities about the village, but it cannot be found. Only a roaming spirit might come across it.

Current areas of medical technology and medical ethics are discussed and illustrated by projections (video by Hua Dong), beginning with the first heart transplantations in Cape Town in the 1970s, which started out with primates, later moving on to humans. The organs of primates were then rejected as unethical, but today transgenic surgery is once again an option. Using the hearts of pigs would mean donor hearts galore, but should this be done just because it can be done?Representatives of Chinese and western medicine comment on the implications.

Nancy’s text is accompanied by polyphonic song. In his work, Nancy describes the heart as an intruder and considers his own heart transplantation as double alienation – by the sick heart, which is now seen as alien, and the newly transplanted heart that is rejected by the body. As Martin Weigel appears wet and shiny as if he were reborn into this world, Svetlana Belesova crawls across the floor. The other actors try to escape the boundaries of the human condition with contortions and acrobatics, yet they seem to be trapped in themselves. Alienness has become their new identity. Komi Togbonou further explores the question of identity in a scene that provides some comic relief.

As the evening progresses, the performers are tearing tiles out of the floor to reveal a sea of red granules. They are trying not to fall into this abyss, which is lighted in an eery flesh colour, resembling the insides of our bodies. Yet, in the end they are buried alive as if they had slipped into quicksand. They are desperately tearing at their thin shirts as if they are trying to escape their own skins, yet there is no escape. They sink into the ground, surrounded by smoke.

This is a unique and intriguing production by an impressive ensemble.

Next performances of Heart Chamber Fragments are on Oct. 12th and 13th, 2021

Running time: 2 hours without an interval