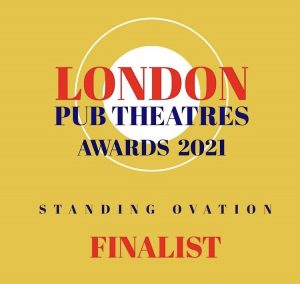 Throughout the year STANDING OVATION NOMINATIONS are announced on twitter. The award is for individuals and companies who might build up a portfolio of nominations over the coming years. We would like to reward exceptional achievement in the pub theatre environment. We’re also keen that this should be encouraging innovation, greater access, sustainability, diversity, under represented voices, taking risks and keeping alive our theatrical history.

Winners will be announced on Sunday 24 October 2021

at an Awards Ceremony

at Lion and Unicorn Theatre (above the pub)

WOLVES ARE COMING FOR YOU by Joel Horwood, at The Jack Studio Theatre

TETHERED by Georgie Bailey/ChewBoy Productions at Lion and Unicorn Theatre

ALL THAT by Shaun Kitchner, directed by James Callàs Ball at The Kings Head Theatre

A RAT, A RAT by Chloe Yates at Golden Goose Theatre

TIER THREE SISTERS by Knuckledown at The Hope Theatre

ABOUT MONEY by Eliza Gearty, 65% Theatre at Theatre503

SWIMMING by Alex Bower, directed by Kayla Feldman at The White Bear

DECEMBER: A New Play for ChristmasAdapted from Charles Dickens ‘A Christmas Carol’ by Alexander Knott/Bag of Beard/Filmed at Old Red Lion Theatre

Congratulations to all the finalists

To find out more about the London Pub Theatre Awards, visit here…