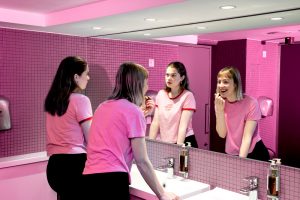 A condition concerning the function of the ovaries, Premature Ovaries Insufficiency (POI) relates to the reduction of eggs produced and an inconsistency in Oestrogen and Progesterone levels – hormones that have an overall impact on women’s health and well-being. Also referred to as the ‘Early Menopause’, POI differs from this due to the age in which it happens, POI a term used to refer to anyone experiencing it under the age of 40. Exploring this little known or talked about condition in the theatre company’s latest show Flushed, writer and co-founder of Theatre Unlocked Catherine Cranfield talks about taking part in Park Theatre’s ‘Say it, Women’ double bill and creating work in collaboration with POI charity The Daisy Network, of which she is an ambassador of.

Hi Catherine, your show Flushed will play as part of the ‘Say it, Women’ double bill at the Park Theatre from the 12thOct until the 6th Nov. How are you feeling ahead of the show?

Hello! Thank you so much for this interview opportunity.

I’m feeling really excited ahead of the show. Flushed was initially scheduled to be at Park Theatre in June 2020 but was postponed due to the pandemic, so it’s been a long time coming and we’re thrilled to be back at it. We can’t wait to have an audience for the show once again!

Flushed follows two sisters after one of them is diagnosed with Premature Ovarian Insufficiency (POI). What inspired you to explore this topic further?

Initially the show was inspired by all of the weird and wonderful conversations I have had in the ladies’ loos – where all the most riveting conversations occur! But as I developed the show, I realised that such an intimate space is the perfect setting to explore women’s health. It was then from my research that I came across POI, and I was struck by how little I knew about the condition, so I got in touch with the Daisy Network and have been working with them ever since.

My work with Daisy, and conversations with multiple women who were generous enough to share their stories with me, were what inspired me to explore this topic further.

You’ve worked closely with the Daisy Network charity to realise the show, of which you’re also an ambassador of. What did this part of the creative process involve? What does it mean to be an ambassador for this little known, but important cause?

The Daisy Network are a phenomenal charity, run entirely by volunteers. They are the only charity in the UK whose soul aim is to support those affected by POI, and it has been a privilege to work with them over the years.

It means a great deal to be an ambassador for this cause. Throughout the show’s performance history,we have played in various venues, including theatres, arts festivals, and medical conferences. To know that we are engaging so many audiences in this urgent conversationis incredibly humbling. Many audience members have commentedto methat they hadeither experienced POI and were thankful to see it portrayed authentically on stage, or that they had not heard of the condition before they came to the show and were thankful to have gained an understanding of it.

Raising awareness of POI,and of women’s health conditions in general, is key to combatting stigma, increasing representation, and helping those who are struggling with feelings of isolation, confusion, and loneliness, see that they are not alone.

As well as writing, you’ve directed the show. Elis Shotton is the show’s Executive Producer, Grace Dickson Associate Producer, with both Iona Champain and Elizabeth Hammerton taking on the lead roles. How have you all collaborated to realise the show?

We have all collaborated a great deal to realise the show. Elis, Iona, Elizabeth and I are all old friends from university, and Grace has slotted in like an old friend too, so it’s been a real joy working together. We also have a fantastically talented creative team working with us, and it’s been really exciting to see how much their talents have elevated the show.

It’s been a hugely collaborative and joyous process, and we’re all thrilled to be making work again after such a long time!

What have you learned/taken away from working on the piece?

I have learned that the theatre can be an invaluable tool when it comes to raising awareness for marginalised voices… and that people will give you some rather interesting looks if they see you carrying a pair of toilets around!

Audiences can expect to feel entertained and enlightened, to see solidarity and sisterhood in full swing, and to have a good old giggle!

I would like audiences to take away from the show a clear picture of what a diagnosis of POI can look like, whilst having felt impacted by and engaged in this vital conversation.

However, I also want to highlight just how incredible the ladies’ loos can be and show audience members just why women go to the toilet in pairs!

Flushed will show from Tuesday 12th October until Saturday 6th November 2021 at the Park Theatre. To find out more about the production, visit here…