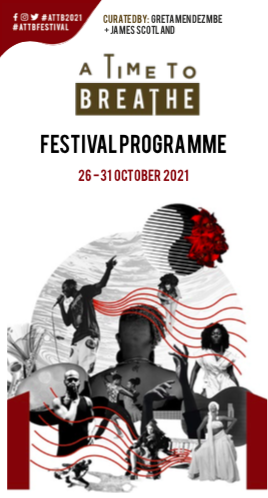 You’ll be taking part in the A Time To Breathe Festival at the venue formerly known as the Stockwell Playhouse – how are you feeling ahead of the event?

I’m feeling wildly excited about it. I’m so excited because Greta Mendez MBE is someone I absolutely admire, she’s a legend. When it was revealed who the wonderful artists on the lineup were, I was just thinking ‘What a great gang to be amongst’, for someone like me coming from Leicester! It’s wonderful, I’m so very excited.

You’ll be presenting The Dreadful Dance of Ms. iniquity,’a single act of egregious immensity by a fictional Black woman, on behalf of powerful interests, a terrible betrayal of her ancestors’. What inspired you to explore this narrative further?

The piece is a choreopoem, a solo, monologue performance with live text, physical theatre, soundscape and some still digital work as part of the narrative. It’s a new work that I’ve crafted specifically for this festival.

The work is loosely based on factual events, but obviously I made the character fictitious, and I wanted to make a piece where I create more than one voice – it’s a solo monologue piece which is what I’ve done before, but there’s different voices to tell this narrative. There’s the voice of a prosecutor, there’s a voice of a witness, there’s a voice of a rescuer, but there’s also the voice of black rage. So my approach was to structure the piece so that we hear different voices come through as part of the storytelling.

What are your hopes for the festival?

My hopes for the festival are that people come to experience these wonderful artists’ expressions which, after a period of Covid, I think we’re all ready to all really engage with. I love the fact that Greta, with the title of the festival, A Time to Breathe, is talking about taking that moment of reflection. We’ve had some seismic events and phenomena happen in the last year and a half or so – politically in terms of Covid and many other things. So having a moment with this festival allows us to just sit back and engage with what artists are wanting to express. I find that artists are very much of the moment. They’re able to give voice and expression to things that maybe people and audiences are generally not able to.

What can audiences expect from your work?

I think my show is an essay. It’s an exploration but it’s also a kind of essay on the idea of a transgressive act and what the implications or consequences can be. But where do we go with that? It’s also an exploration of a character. It’s an exploration of African Holocaust and of Black Lives Matter. I would like people to go away with this deeper, deeper feeling and understanding and a sense of some of those issues to reflect on.

It’s a wonderful opportunity for an artist like me who’s not based in London to have an opportunity to have this platform in London. That’s means an awful lot to me. I think it’s great that Greta has brought in an artist from another part of the UK, another region. It’s going to bring a different voice, and a different perspective. Things are very London centric so having someone come down from Leicester to perform in this wonderful festival really does mean an awful lot.

The inaugural ‘A Time to Breathe’ Festivl starts from today up until Sunday 31st October 2021. To find out more about the event, visit here… 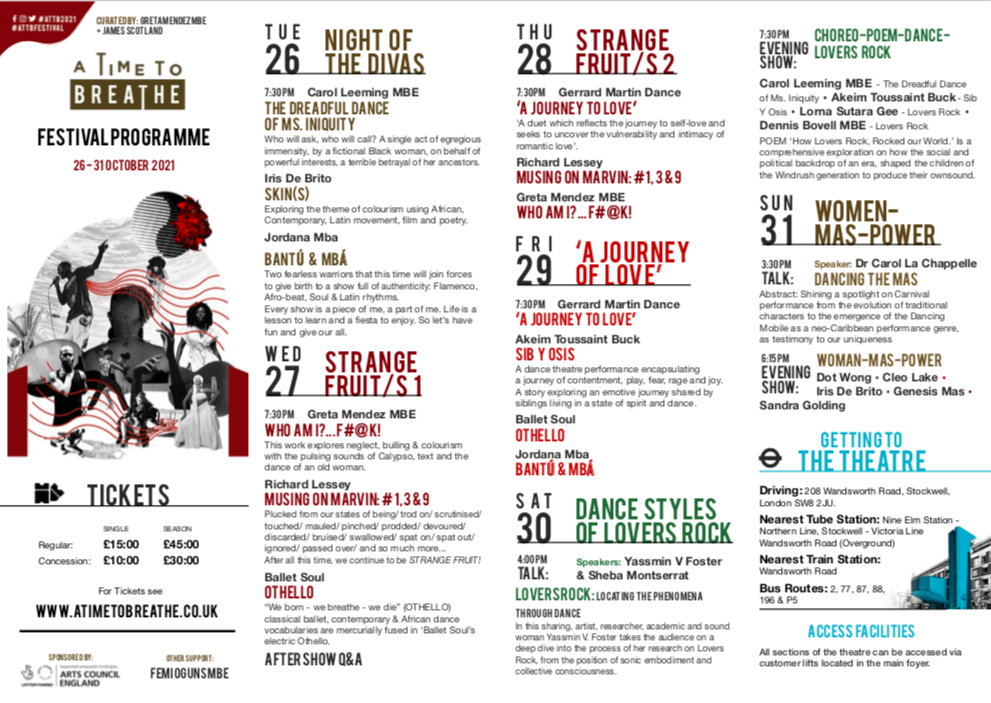 The event lineup is as follows: