Society is formed from the sum of broken hopes. Recently, the Kammerspiele presented the world premiere of Frau Schmidt fährt über die Oder (Ms Schmidt crosses the Oder) by writer-director Anne Habermehl in their studiospace. The play is the first part of a trilogy that the author is writing for the Kammerspiele. 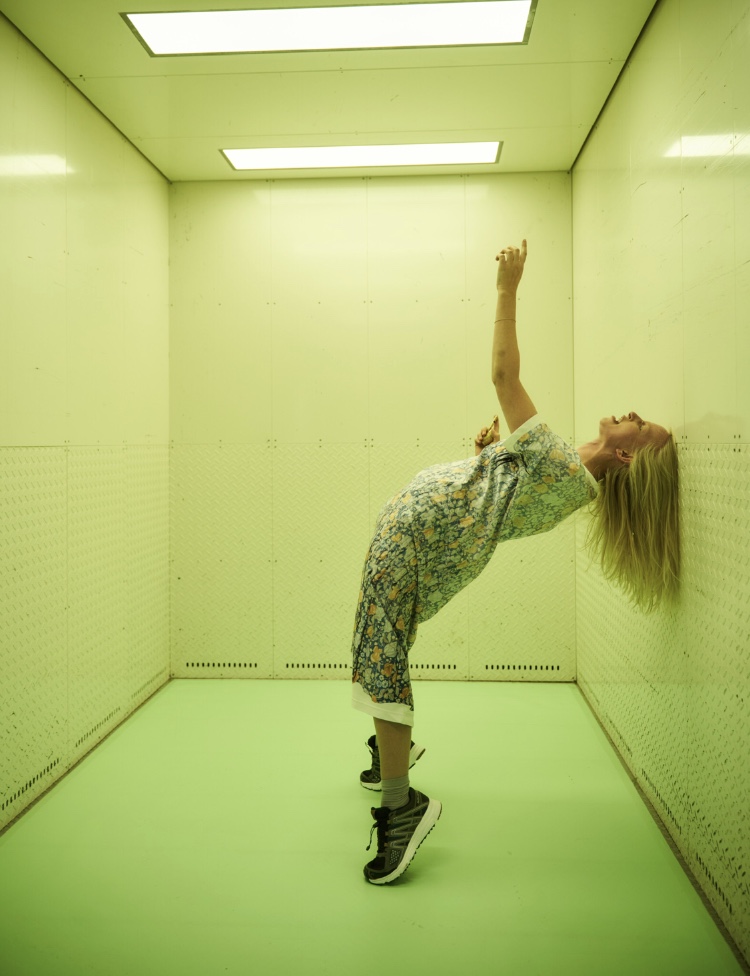 In her drama, Habermehl talks about history and the traumas suffered by different generations in this German-Polish story, which features three generations and four characters. In 1990, the communist system collapsed, and new states were formed. It was a moment in history when everything seemed possible. Susanne Schmidt, a German Pole from Wroclaw, thinks this is the perfect time to make a new start into a democratic future and decides to cross the Oder into Germany, leaving behind the father of her unborn child, her home, and her grandfather. Yet she ends up in the Bavarian countryside, in Markredwitz, where “the East did not exist. Even today.” Her illusions shattered, she works in a nursing home and raises her daughter Annemarie.

The play begins as the grown-up daughter (Anna Gesa-Raija Lappe) returns to her dying mother (Johanna Eiworth). They have not seen each other in many years because Annemarie, like her mother before her, also left her home. Annemarie is shocked about the doctor’s decision to turn off her mother’s life support because she is braindead. She wants to take her away: “Maybe she is not dead in Poland?” When she asks for a Polish speaking doctor, there is no one to be found.

Poland and Germany are neighbours, but for a long time they were enemies. The Holocaust is ever present, also in Habermehl’s play. Susanne Schmidt was considered a German in Poland and is then considered a Pole in Germany, an outsider in either country. As Nazis terrorize the Bavarian town, Susanne is naturally a target, and the authorities do little if anything to stop them. Meanwhile Rosemarie’s father has become a supporter of the PiS Party in Poland.

Susanne’s grandfather (Walter Hess) has a traumatizing experience buried deep inside, something that happened in 1945 on a farm where many forced labourers from Poland were employed. He will not disclose to his granddaughter what happened, which strengthens her decision to emigrate to Germany.

The fourth character in the drama is Micha (Frangiskos Kakoulakis), who is “born often” as several characters – a Polish labourer in 1945 and a young man deeply and awkwardly in love with Annemarie in the noughties. His mint green suit matches the colour of the wall, which makes him almost disappear, even as he dances to attract Annemarie’s attention.

The cubic stage features a white floor, a mint green wall with built-in steps so the actors can get to the upper level, and a mint green construction that teenaged Annemarie climbs on (stage design by Sabina Winkler and Charlotte Pistorius). The brick wall of the studio forms the background.

Skilfully directed by Habermehl, this intriguing story about the end of utopia, trauma, and emigration includes an excellent cast. Gesa-Raija Lappe is very good as the young Susanne and daughter Annemarie, as a 13-year-old teenager and the grownup photographer. Eiworth is outstanding as the disillusioned and broken Susanne, who is expelled from her flat because she has destroyed it by smoking. As the priest, played by Hess, offers her support with a bottle of schnapps, she declines: “I live off the light of my cigarette.” Hess lends credibility and gravity to his roles as Grandfather Wilhelm, the Doctor, and the Priest. Frangiskos Kakoulakis convinces as Micha, a character floating through time.