Sitting in Wembley Park Theatre feels like being back in school assembly. We’re sitting on stacked bleachers of felt chairs in what feels like a sports hall (actually an old X Factor studio). The programme has textbook puzzles and gobbets from pop-mathmo, Marcus du Sautoy. As it happens, the auditorium is packed full of school trips and the stage – an iridescent cube – is cast in grid paper, or Tetris cubes. The Curious Incident of the Dog in the Night-Time is, at its barest, a story about a boy (Christopher Boone, played by Connor Curren) leaving home. After ten years and a global tour since it opened at the National’s Cottesloe Theatre, it is back to the classroom for this only slightly saccharine story of family, trust and innocent bravery. 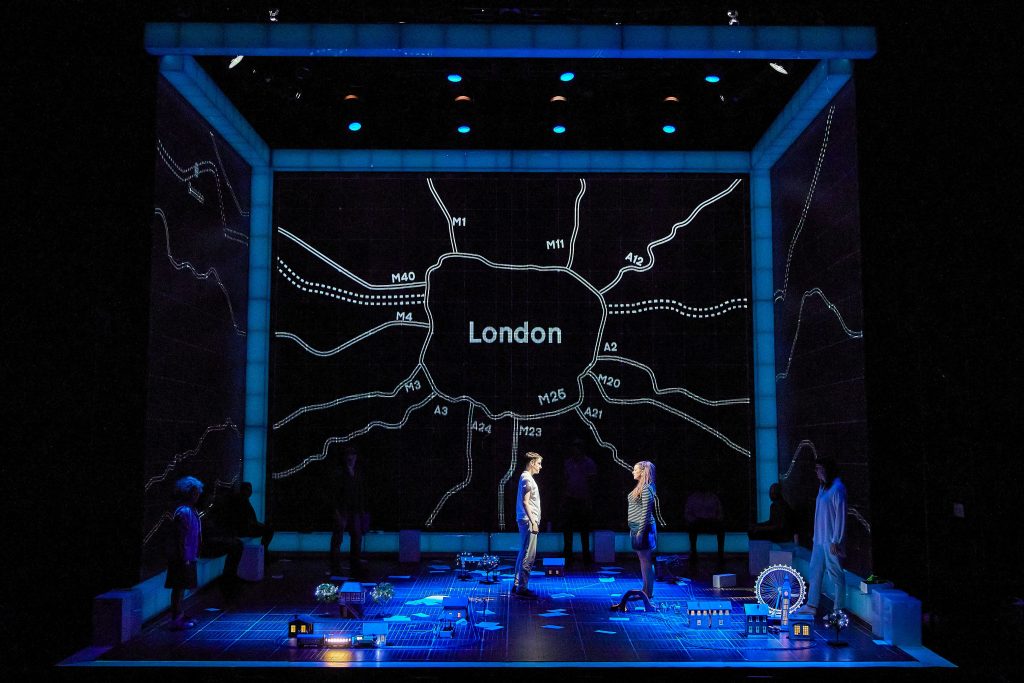 After so many runs, some of the performances feel a little dulled, perhaps by repetition. Tom Peters, as Christopher’s abusive (but, it seems, ultimately forgiven) dad is one note, but at least his accent sticks. The rest of the ensemble are a little more fluid: Wiltshire sounding a little more Cornish at one moment, more Jolly Rancher American the next, at worst a pirate. Ashley Gerlach and Joanne Henry (both playing an assortment of characters outside Christopher’s family) likewise turn in one-dimensional performances: the kind of showings forgiven of West End musicals, but which feel a little cursory for a sell-out hit.

In the event they are forgiven because of standout performances from Curren, himself autistic, and Sophie Stone, playing his mother. Curren is so obstinately, exasperatedly physical that by close of curtain he looks genuinely haggard. Stone, on the other hand, is tirelessly emotive; she achieves a characterisation that’s big enough to carry to every seat in the theatre, but which doesn’t lose any depth.

Rebecca Wilson (listed as an understudy) gets the biggest laughs: by turns demure schoolteacher, cockney shopkeeper and sultry card machine. When she and the rest of the ensemble are running in top gear it’s as accessible and persuasive a case for physical theatre as you’ll see. Movement directors Scott Graham and Steven Hoggett from Frantic Assembly dodge all the usual pitfalls; it doesn’t register like cringey GCSE devised drama, nor like a dance/puppetry troop that’s turned its hand to acting.

The first half is impressive: a charming story-book sequence when Christopher raids his father’s bedroom and a daydream floating in space with his pet rat, Tony. With lighting (designed by Paule Constable) and Ian Dickinson’s sound design, the production flexes it’s muscles in sequences of nightmarish sensory overload after the interval – somewhere between wonky acid-trip and Radiohead live show.

This is where theatre can hold out on film and TV. It’s immediate and emotionally transporting; self-indulgent production is well-earnt by juxtaposition with moments of simple blocking and good acting. Mostly put to work visualising Christopher’s mental state, at times it feels like Marianne Elliott is flaunting her stagecraft for the sake of it. Does it all get a bit lazy in the end? Maybe one of the many scribbling students will decide which is more effective: powerful visualisations of neurodiversity which draw on the unique tools of theatre, or cheap fourth-wall breaks for a giggle and a live puppy to reward Christopher for his efforts (the biggest reaction of the night). My thoughts are probably clear.

The Curious Case of the Dog in the Night Time is currently showing until Sunday 9th January 2022. To find out more about the production, visit here…