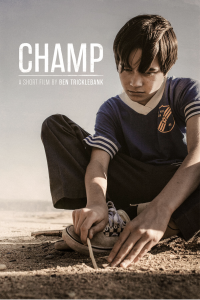 Due to start production in March of 2020, Ben Tricklebank’s short film CHAMP would witness a sudden shutdown in production due to the pandemic. Spurred on to realise the pertinent film’s vision – an exploration of masculinity, societal expectations and familial bonds, the production team would go on to craft a 15 minute piece that has now gone on to qualify to be considered for an Academy Award®. Currently enjoying much deserved success within the film festival circuit,  CHAMP continues to receive much deserved praise. Ahead of the Academy Award® nominations announcement on Tuesday 8th February 2022, Ben tells us more about the film’s creative journey so far!

Hi Ben, your short film CHAMP has qualified to be considered for a 2022 Academy Award®, how are you feeling?

A little overwhelmed, a little surprised! We shot the film in May of this year and finished it at around the end of August and it’s been a whirlwind process of suddenly getting it out into the world. I expected us to perhaps have a slightly longer journey to this point. We are still going to submit the film, it has been submitted to a bunch of film festivals, but it’s really exciting! I’m thrilled to see the kind of response that we’ve had to the film, that people think that it has a possibility of being considered for this kind of prestigious award is really fantastic.

CHAMP is an exploration of masculinity, societal expectations and familial bonds. What inspired you to explore these topics within the piece further?

It’s interesting, in a strange way, the subject of the project found me. I’d been looking for material, ideas, writing different ideas for a short film for a while and never quite landed on the right thing. Then I found this script, which actually started life as a short film called ‘Young Man’s Game’ which was written by James Goulborne. I contacted James and we started talking. I said how much I love the story and that I’d like to make the film and so we worked together to develop it. Through the process, I discovered what there was under the surface and how much potential it had to shed a light on this. It felt like something so relevant now, it’s such a nice story of how you can capture the potentially devastating consequences of this type of behaviour in a very short period of time and that felt very significant.

CHAMP marks your live action directorial debut, what did the process involve in terms of realising the end piece?

My biggest focus was on finding the right actors. It was originally written to be shot in the UK, we had it in production in the middle of March 2020 and two days away from starting to film, we had to shut things down because of what was happening. We went away, reflected on that, came back, tried to shoot it again, and that fell apart again! Then decided – well, let’s look at this a different way! We explored the idea of shifting it to the US. It’s the same story, but it some how took on more significance, more context and more scale. Within that process, I had the opportunity, although it was kind of heart breaking being shut down twice, I had this wonderful opportunity to really explore, really get into the story, get into the characters, and really think about all the subtext underneath this, and how I could try and engineer those performances to really get to the core of what the film’s about. As a result, I think we had a much better film. By the time it came to actually shoot it, I had so much time, I felt like I knew these characters so well that we had it all figured out. Drew (Powell who plays Danny) and Kingston (Vernes who plays Jake) took that on and took it to a whole other level.

What have you taken away from the process of creating CHAMP?

Never stop developing it I suppose! There’s never a point where you can look at it and go, it’s done, it’s ready. Whether it’s a script, whether it’s a production, there’s always something that you didn’t see. I’ve certainly taken away this idea that it’s an on-going process and it continues right through into the editing room. To never stop trying to push those ideas forward!

A tender, slightly bittersweet story about father and son. We really tried to get under the surface of what is quite a strained relationship between a father and son, who’s separated from the child’s mother and really what it means for this young boy to be torn between two worlds, two quite opposing worlds and what that influence can have on that child. What that means for a child looking for acceptance and approval of a parental figure and how much that can shape and be manipulative in a damaging way in some cases.

I hope this inspires conversation, makes people talk about the subject matter of the film, and perhaps think about how our actions, things that we do and say can affect other people – to me, that would be a huge success!

To find out more about CHAMP, visit here…