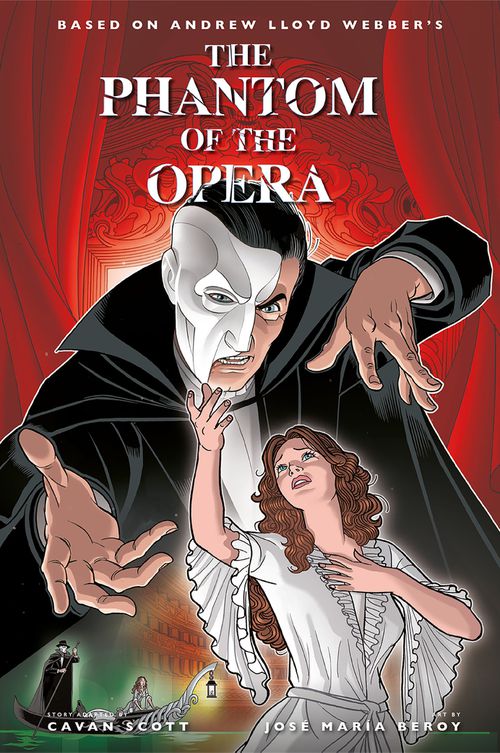 Inspired by Gaston Leroux’s 1910 novel The Phantom of the Opera, Andrew Lloyd Webber, alongside lyricists Richard Stilgoe and Charles Hart would go on to create the iconic multi-award winning musical (1986) of the same name. Four decades on and the musical has enjoyed global success and continues to be enjoyed by many musical fans. Taking on the iconic musical and presenting it within a visual art format, Titan Comics have created a graphic novel version currently available to purchase online. A team effort, having been written by Cavan Scott, with visuals created by José Maria Beroy – theatre fans are now able to enjoy the musical in an alternate manner as well as own this unique collector’s item. Author Cavan Scott tells us more about the creation of the graphic novel!

The Phantom of the Opera graphic novel is available to purchase from Dec 7th in the UK and 11th Jan 2022 in the US and Canada. How are you feeling about the publication?

I’m excited, it’s finally going to be out there. The graphic novel has been finished for a long time as publication was held up by the pandemic. It’s been frustrating, but we’re here now—and just in time for Christmas too. (Or should than be New Year’s Eve to tie into Masquerade?)

As the longest running show in Broadway history and a well recognised show globally, The Phantom of the Opera was originally a novel by Gaston Leroux that was transformed into a musical by Andrew Lloyd Webber and Charles Hart. The show’s premise revolves around soprano Christine Daaé who becomes the obsession of a mysterious masked genius who resides in a subterranean world located underneath the Paris Opera House. What inspired yourself to explore this narrative further?

Titan came to me with the brief of adapting the musical and it was an intriguing challenge! I love Phantom and could immediately see how the drama could transfer onto the page.

How have you approached creating the graphic novel?

I worked from the original libretto, breaking down the scenes into a general plan of the final book, working out which beats needed big double page splashes and worked the structure back from there. One of the challenges was working the songs into the text. Now obviously a lot of them work as dialogue, but I wanted to keep the essence of them being performed.

One of the most satisfying aspects of adapting the musical as a comic is that we’re obviously not limited to a stage and so have been able to explore the many nooks and crannies of the Opera House, both above and below the ground!

What have you taken away from the creative process?

It has reignited my love for the original musical all over again, not that it was in any danger of flickering out! I was invited to watch the London performance again before we started and revisited as many versions as I could, including the recording of the 25th Anniversary Royal Albert Hall performance, which is one of my favourites.

What can readers expect from the graphic novel?

The story they love from the stage, beautifully brought to life by the wonderful art of José Maria Beroy. José has created his very own versions of every iconic set and costume, including, of course, the infamous mask!

What would you like for them to take away from the graphic novel?

I’m hoping that Phantom fans will enjoy the experience, especially if they’re never really read a comic before. If that’s the case, I hope it’s also a gateway for them. And likewise, if comic fans pick up our version of Phantom and enjoy what they see, I hope they will try out the musical if they’re never seen it!