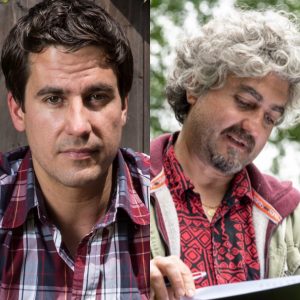 Our upbringings shape who we are, our localities central to how we navigate our lives. Now more than ever it is crucial, post pandemic to help build a brighter future. A future where multiple voices from various communities are platformed and heard. Uniting the nation, and addressing its colonial past, Artistic Director of Tamasha Theatre Fin Kennedy and Founder of Holy Mountain Boz Temple-Morris present The Waves, an audio drama series spanning the isle and highlighting the impact of the past within our present. Consisting of 5 audio dramas from some of the UK’s promising talent, The Waves has started to air weekly on Resonance Radio and 26 local radio stations. Fin and Boz tell us more about curating this very important series!

Hi Boz and Fin, Holy Mountain and Tamasha Theatre present The Waves, a collection of audio dramas broadcast via Resonance radio and 26 other community stations recently broadcast from 19th January. How are you both feeling?

BTM: Good thanks. Very proud of what’s been achieved and hopeful that it’ll reach its audience and make its mark.

FK: This project has been a year in the making, so it’s great to finally be at broadcast stage. The plays are all brilliant new work from genuinely new talent, so I’m excited to finally be able to share them with the world.

The waves comprises of five audio dramas telling local stories from Cardiff, Bristol, Manchester, Leamington Spa and Edinburgh painting a picture of contemporary Britain and how it’s been shaped by its colonial past. What inspired you both to explore this further?

BTM: This is such a central issue in our culture and identity and yet it’s seldom discussed or explored in a meaningful way. Our colonial past seems to be either ignored, or weaponised into some right wing fantasy culture war. It’s our job as storytellers to look behind the nonsense at how this affects everyday lives and the way we live today. The inspiration was to see what happened if we found 5 great storytellers from communities who quite literally have skin the game, and to ask them what stories they want to tell.

FK: I’m fascinated by the legacy of British colonialism. It is far from being remote history – its iniquities live and breathe to this day, and directly impact the lived experience of millions of Brits (white ones included). And yet ask any school child what they are learning about this 400 year period which shaped our world, and the answer is invariably next to nothing. The absence of this period from our National Curriculum is odd to say the least, and the ignorance this engenders is regularly exploited by cynical politicians. In the absence of leadership around addressing the enormous damage done to community relations today by this failure to acknowledge our past, it falls to culture-makers and storytellers to lead this debate, which is exactly what The Waves sets out to do.

The five audio drama are: ‘We See No Colour’ by Danielle Fahiya (Cardiff), ‘Grovesnor Road’ by Corinne Walker (Bristol), ‘Baby Mama’ by Stefanie Reynolds (Manchester), ‘Queens’ by Erinn Dhesi (Leamington Spa) and ‘Glory, Glory an Edinburgh Story’ by Kamala Santos (Edinburgh). How did you approach curating the line up?

FK: Tamasha and Holy Mountain searched far and wide to find a diverse writing team but based outside London. Some were members of the long-running Tamasha Playwrights group which I set up, and which was already training regional writers for some years. The others, in Scotland and Wales in particular, we put out calls and did a bit of head-hunting. We invited promising writers in each region to pitch us a short outline of the story they would want to tell in response to the brief, and selected the most exciting ones for further development. What we’ve ended up with is a seriously exciting roster of new talent which reads like a map of the UK!

GROSVENOR ROAD (26th Jan) by Corinne Walker (Bristol) uses split time periods to look at the fate of a former slum building housing a cafe, which was a focus of Caribbean anti-racist organisation in the 1970’s and 80’s.

BABY MAMA (9th Feb) by Stefanie Reynolds (Manchester) catches up with mixed middle class couple Renee and James, on the day they move into an expensive flat within a former cotton factory in Ancoats, Manchester.

QUEENS (19th Jan) by Erinn Dhesi (Leamington Spa) uses the imposing statue of Queen Victoria in the town centre as a magical realist portal into the past for grandmother Surinder and her recalcitrant granddaughter Simran. When Surinder is diagnosed with dementia, she seeks Simran’s help to recover some disturbing memories from her past, not quite sure what she’ll find.

All of them present such rich and authentic lived histories, and complex moral worlds. Together they chart the subtle and ongoing legacy of 400 years of British imperialism.

The project has been put together by yourselves – Fin with the dramaturgy and Boz with production. As well as being supported by sound designer Alisdair McGregor, music by Michael Somerset Ward, production coordinator Tina Temple-Morris and artwork by Brighten the Corners. How have you all collaborated to realise the project?

BTM: When I started making audio drama in the early 2000’s I came with a background in devised theatre and so close collaboration was always central to the work. In radio it’s less common but it remains a hallmark of any Holy Mountain production. That means, for example that writing and sound design work closely together at an early stage. It also means that the whole team is very engaged in the central mission and purpose of the work.

FK: Funnily enough, because the plays were all developed during the pandemic, many of us have never actually met in person! We trained all the writers and directors in audio drama production over Zoom, with phone calls and the odd visit as they re-drafted their scripts. We have a WhatsApp group to share ideas and progress, and that’s become a nice social space during the broadcasts where we all listen together. Until the broadcasts each writer knew very little about what the others in the series have been developing, so it’s been fun to come together at last around the broadcasts. At some point we’ll have to get everyone in the same room to buy them all a drink! We also really want to make a second series.

What have you both learned/taken away from creating the collection?

BTM: A lot. The most rewarding projects are those where everyone is learning something, but not the same thing. We’re all learning from each other and from the process. We want to try different ways of creating ‘grassroots drama’, facilitating storytelling from communities that may ‘own’ the story – so learning about how best to do that is crucial. Devising ways to bring writers new to radio into the world of audio drama is another one. And finding out about the incredible stories that have been unearthed – the culture of resistance in Bristol in the 1970’s, the Belizean lumberjacks who arrived in Scotland during World War Two… the list goes on.

FK: Although we always knew in principle the insidious effects of these more hidden aspects of British history, it has been fascinating and even a bit sad seeing in such detail across our dramas the lived experience of culturally diverse Brits. Each story deals with challenge and trauma in its own unique way, and always with a wonderful lightness of touch, The plays also raise brilliantly thorny ethical scenarios, such as an elderly black character who doesn’t support Black Lives Matter, or a well-meaning beauty pageant organiser who perpetuates skin tone discrimination while trying to do something about it. All are such nuanced situations, and taken as a whole are smart, funny and subtle indictments of a contemporary Britain paralysed by the enormity of its past actions.

What can listeners expect from the dramas?

What would you like for listeners to take away from them?

BTM: Conversation. That’s where change begins, I would say. I hope that listening to these might inspire conversation of any kind between people and thereby allow people to make discoveries for themselves.

FK: Empathy and recognition. We are all of us caught up in the mess left by our ancestors, with all its lingering prejudice, misunderstandings and injustices. The perpetrators are long dead, of course, so our stories don’t seek to bash anyone. What we’re left with is a generational untangling, which can sometimes feel challenging. But hearing from the perspective of characters and writers at the sharp end of all this is the first step in understanding how we might go about talking about this past together, honestly, and in a constructive spirit, under the banner of all being British together. Much like our logo, Britain is multi-coloured these days. Whatever nonsense continues to rage in Westminster and the tabloids, I’m optimistic that the best of our country – its tolerance, fairness, compassion and creativity – will ultimately triumph.

The Waves audio series will play on Saturdays at 7:30pm on Resonance Radio, to find out more about the series, visit here…

The audio dramas can be listened via the following stations: