You match on a dating app because the technology does not recognise borders and for some precious weeks Boaz and George try not to either. What’s a measly fence with a hole in it compared to the strength of their connection? What’s 20km? 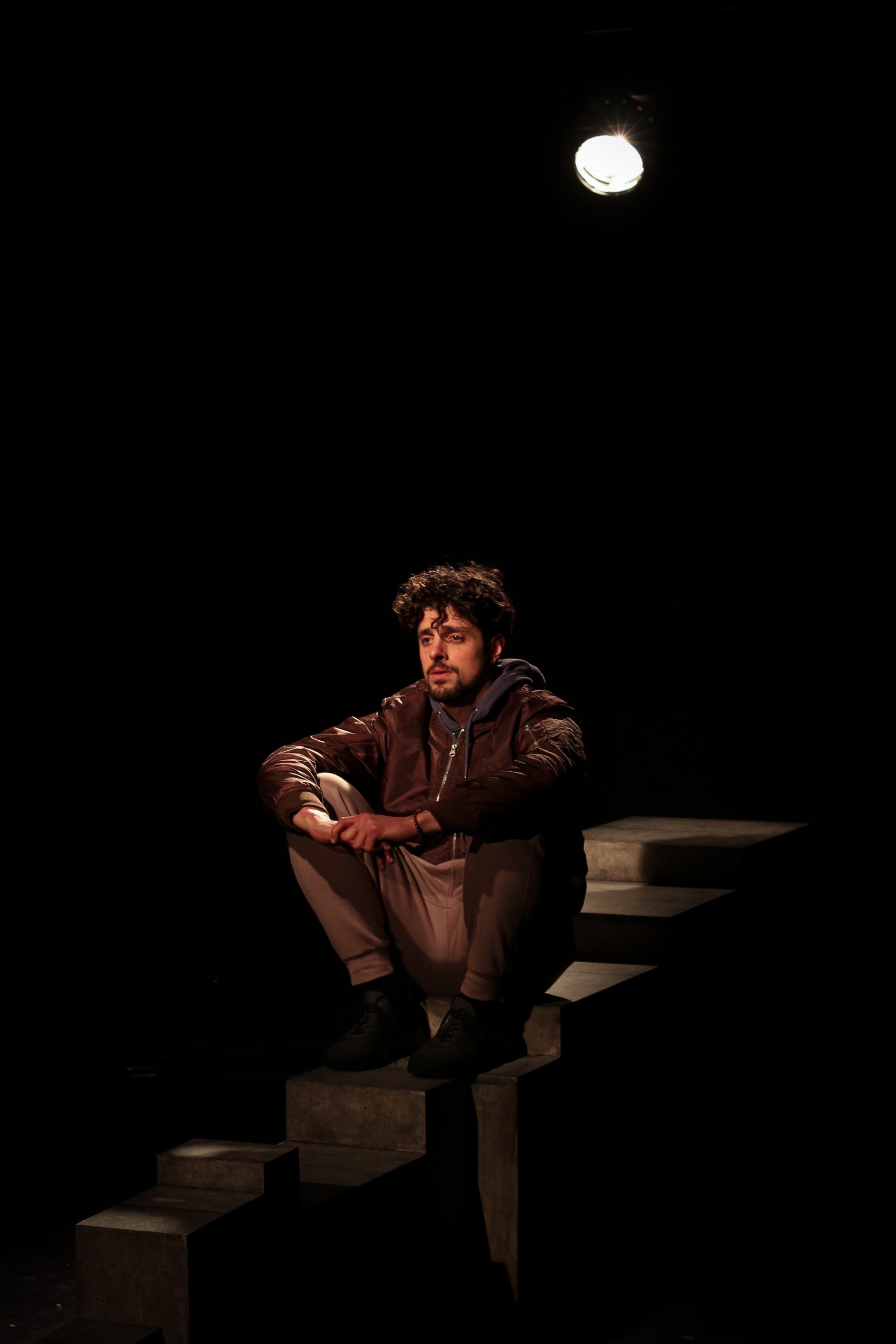 Nimrod Danishman’s Borders tells a modern love story of two men who never actually meet. The play opens with direct address to the audience. They’ve just ‘met’ and there is a minute of confusion before it becomes apparent that the play is set in virtual space and the two characters are avatars interacting with each other through text alone. It’s a new form of storytelling that was masterfully done at the Royal Court with Jasmine Lee-Jones’s Seven Methods of Killing Kylie Jenner.

Danishman’s take of dramatising virtual space is far more intimate, this is Grindr after all and unlike Seven Methods, the setting and mode of dialogue remains the same. The avatar’s don’t look at each other. They speak out into the ether of the internet, and it is a striking concept. However, it soon becomes repetitive, and the actors go through a limited set of motions.

The set by Ethan Cheek is simple, there are jagged blocks that move representing the border which separates them, and there are cushions which they interact with breaking the illusion of digital space which I am unsure works. And then there is the never-ending cycle of dressing and sleeping which by the sixth time Boaz pulls on a sock, I am struck by a weary sense of déjà vu. Although I see it’s purpose of conveying the passing of time there are more creative and subtle ways of doing this such as the excellent lighting design by Cheng Keng. The pulsing effect created with moody shades contributes to the intimate and sometimes claustrophobic feeling that comes with the territory of online dating.

The phenomena of ghosting and the dreaded “Are you still there?” that is part and parcel of modern dating is highly accurate. The audiences’ discomfort is palpable as we observe the nerves and vulnerability associated with first attraction in the back-and-forth stream of texts interrupted by pauses of varying lengths.

The handling of the issue of borders and nationality is clumsily done. There is huge potential for a provocative exploration of forbidden love in a context of one of the most complex global-political situations of our time and the simplistic approach is disappointing. The conversation leads no further than one stating they have no choice in mandatory military service because… “You don’t understand.”

Performances by Jospeh Samimi and Yaniv Yafe are fine when viewed in isolation, however I question the compatibility and chemistry of the two actors together. This is partly down to how similar their personalities are – you feel as if they could have swapped roles, and nothing would have changed but this may be down to the underdeveloped characterisation by the playwright.

An ambitions play which crams in a number of relevant modern themes in one short hour but has a lot of room for improvement.

Borders is currently showing until Thursday 17th February at the Drayton Arms. To find out more about the production, visit here…