Originating from the Akan Tribe in Ghana, the term Sankofa translates as “To go back and  get it”, a reminder of how important it is to look back at the past and revisit our roots in order to move forward. The word such a powerful sentiment it has with it its very own symbol, characterised by a striking heart shaped logo. Delving into her recent, as well as not so recent past and heritage, British Ghanaian theatre maker Nicole Acquah presents a semi-autobiographical piece tying folklore with the modern day. 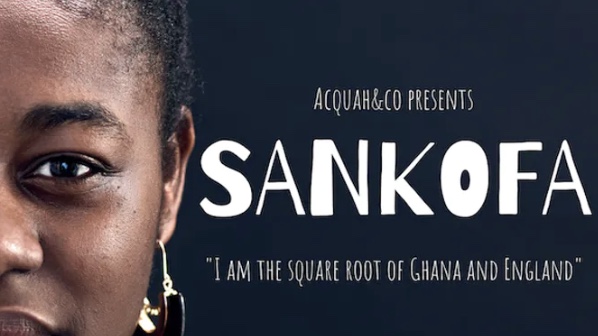 After the incredible discovery that her grand uncle Asiedu Yirenkyi played a pivotal role in the shaping of Ghanaian theatre, Nicole is inspired to further explore her own cultural identity and legacy, Sankofa as much about connecting with the now as it is about looking back. It is instantly made clear that Acquah is concerned with the evening feeling communal, a moment for discussions to be had – drawing on the power and significance of the names we’re given and asking for audience members to note their names down, and if possible explain what their names mean. Her family, friends and parents also part of the audience, adding to evening’s relaxed tone.

Sankofa for the next 80 minutes flitters between African folklore – Amma Pranaa, one of Yirenkyi’s works , and draws on the African storytelling tradition of passing down tales orally through the ages and integrating musical accompaniment, beautifully supplied by Doyin Ade playing the African drum and Vanessa Garber playing the clarinet. The tale’s theme of a royal having to chose her future husband from a selection of suitors resonant in regards to the idea of now being able to chose who you can fall in love with. This tale of old integrated with Acquah’s own story of navigating modern love, continually discovering who she is both personally and as a theatre maker of the African diaspora and dealing with the perceptions of her identity, especially on her travels around the Mediterranean touring theatre.

Aquah writes and performs an honest, explorative, warm piece, Carol Leeming MBE directing an ambitious evening packed full of content that leaves you thinking post show. This is a lovely addition to the British African canon, one looking at the perspective of contemporary Black Britons and this is incredibly important, I look forward to more shows that contribute to this.

Sankofa is currently showing until Saturday 19th February 2022 at the Bread and Roses Theatre. To find out more about the production, visit here…