New play by Hannah Kennedy makes their stunning debut at the charming Barons Court Theatre this week with excellent performances across the board. It is astonishing that an emerging writer is able to confidently deliver an instant classic tackling universal themes of love and partnership in a contemporary context whilst staying honest, thoughtful and heartfelt. An urgent must see and talent to watch. 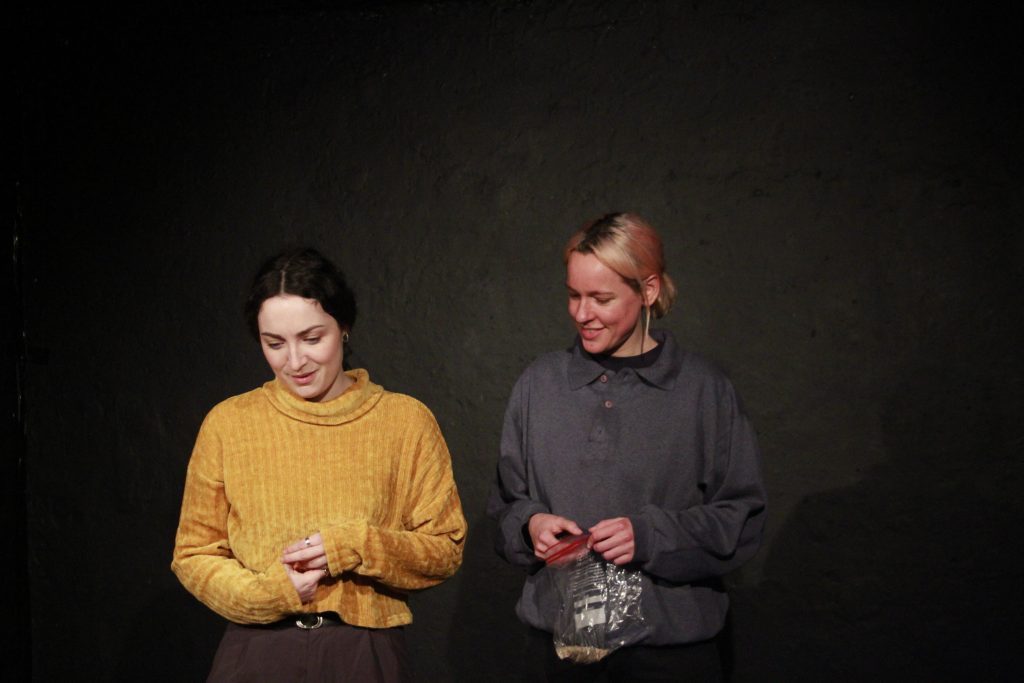 At first glance the play is deceptively serene like the pair of ducks you see on the promotional material. But underneath the water their feet are flapping frantically. The play perfectly reflects this metaphor in its narrative. It’s a slow burner and there’s a lot of apparently normal day-to day banality in the first half of the play. You stay tuned however because the dialogue is exquisite. A perfect illustration of reading between the lines that has me at the edge of my seat tempted to shout out “Speak damn it!”. You are watching two women falling in love and share a life together without really talking to one another about the chaos buzzing beneath their quaint hikes and gentle affection.

The excellence of writing is followed closely by Mercedes May Lopez‘s performance who is unflinching in her portrayal of the supportive partner-turned-carer. As the play cuts back and forth from Lucie’s past to the present day in a soon-to-be therapists office López holds her gaze steady on Jem, her expression does not falter, she is completely committed to the moment. Her performance is most hypnotising in these moments of transition as you watch her switch flawlessly from one scene to the other only once she is given the queue to react from Joe Bonfield playing Ed the therapist who gently lulls her out of the memory. It’s simple but so effective.

The dynamic of the therapist and patient is turned on its head by breaking the illusion of a therapists all-seeing all-knowing God complex by introducing him as a former acquaintance and therapist in training. The power dynamic is off thus providing an excellent opportunity for some wonderful theatre moments, and both raise to the occasion. “It was never about the washing machine!” “Is this some tactic?” Lucie sneers at him as he tries to get her to go beyond the metaphor of the ducks by sharing a personal metaphor of his own. It’s frustratingly good.

There is much more that I could say about this remarkable and accomplished play and performance, such as the precision of the blocking decisions, the clever use of blue light to suggest water that is never interrupted, the movement piece towards the end which take us into another dimension, Bonfield’s understated performance which has to rely in most part in his voice as his position rarely changes but I will conclude with this: I am glad that theatre is back and makers are creating bold pieces like this to tell modern and relevant stories. We need new classics to reflect changing times and fringe theatre is where we see the beginnings of the cultural movements. A massive accomplishment by the whole company. Bravo.

Ducks is currently showing until Saturday 19th February 2022 at the Barons Court Theatre. To find out more about the production, visit here…