The premiere of Dipo Baruwa-Etti’s An Unfinished Man at The Yard Theatre is an exciting one because it brings to the surface the complex interplay of culture and mental health which many children of migrants (including myself) will find validating. 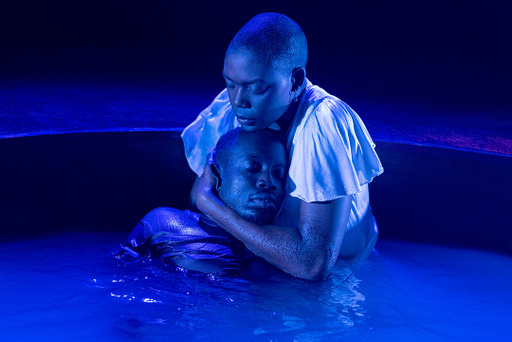 Selina Jones steals the show for me before it properly starts. As we enter, the lead actor Fode Simbo playing Kayode is on the stage looking distracted and nervous. As we settle into our seats we take in the gaudy set, with its plush red carpets and expensive looking house plants, and then strangely there is a pool bang on centre stage. It doesn’t make sense but that’s okay, this play is already preparing us for the unexpected. Later, the pool takes on the symbolism similar to the sunken place in the film The Get Out.

And then I finally see her, Itan, she’s lying across the top of the set almost completely still, gazing around in curious indifference and exuding a confidence that is in direct contrast with Kayode. Later we are treated to Jones’s entire range of performance shifting from her role as unexplained fly-on-the-wall to her stunning movement piece with Simbo as they battle it out in a way that reminds me of Natalie Portman’s famous Black Swan scene, and then finally, when she is given the chance to speak and emerge as a fully fledged character who represents the fluctuating causes of Kayode’s unemployment.

I love the obsession of employment being seen as the ultimate prize for Kayode, imposed on him by his mother, wife and of course society. The idea that to be a successful male in the 21st century is to have a job. I note the laughs from the audience at the beginning when Kayode jokes he’d be ready to be a stay-at-home dad given his seven years of unemployment Kikiope responding with an exasperated laugh. The arbitrariness of our value system is exposed in this play as job interviews are caricatured as the test for Kayode’s wellness.

I’ve previously seen Baruwa-Etti’s debut play The Sun, the Moon, and the Stars at the Theatre Royal Stratford East which landed on the theatre scene like necessary guerrilla warfare, post-Covid and Black Lives Matter. This play is less raw, has a bit more control and finesse to it, but unfortunately fails to meet the high standards set by his first play. The artistic vision feels disjointed and the story never really hits its stride. There’s a lack of structural integrity the first two thirds of the play and the chaos is confused, spilling from all sides, except from the dependable wife Kikiope who gets her satisfying line in the end “I always knew” in a beautiful bit of dramatic irony.

I also think as someone who is keenly aware of the role that religion, witchcraft, and mental health play in some migrant communities I am disappointed that the well-meaning pastor and mother are depicted one dimensionally and comically as misguided and ignorant people who would never understand mental health. Perhaps this is true, some people can’t and that is my own journey to take but I do think there could have been a way to bridge the two mindsets to reach some kind of resolution.

Nonetheless, the play comes together wonderfully as they strip away the spectacle and the ceremony and, in the end, we are left with something much more mundane, tedious, impenetrable and in some way more mysterious: mental health. And there, the sensible wife knows all along, but she doesn’t get the last laugh.

An Unfinished Man is currently showing until Saturday 12th March 2022 at the Yard Theatre. To find out more about the production, visit here…