Tyrell Williams’s first full length play directed by visionary Daniel Bailey makes its stunning debut at the Bush Theatre to rapturous applause, laughter, and cheer. As I join the audience in their standing ovation, I struggle to find a single piece of constructive criticism. I whoop and whistle even though my throat is parched from laughing throughout. This play is perfectly written, perfectly produced, and perfectly performed by three incredibly talented young men who tell Williams’ story with comedic genius, high energy, and emotional mastery. 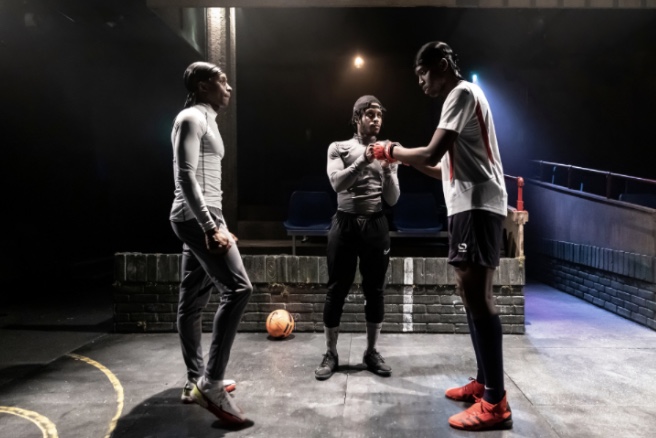 I am struggling to find the words to paint its accomplishment. It feels rare to see a play which feels like it defines an era and I feel incredibly privileged that I get to witness this extraordinary achievement.

As you enter, the set is as you expect it to be. Here is the rectangular pitch in the round, lines drawn on the stage, a suggestion of a fence and not much else. The music is live, and it feels like a party. The actors start off small, it’s clever that they hold back on their entire range as events unfold. The dialogue similarly isn’t doing too much, it is highly realistic but a few lines in, they’re sparring because “Red Pitch rules”. Half of the dialogue is like this, pure joyous banter between teenagers and nothing stays heavy for too long until it does and by then we’ve been trained to believe in the strength of their brotherhood.

The story is a simple one of friendship built on a dream of making it professional in football and the ties of community that comes with growing up on an estate. They have grown up nourished in love and friendship, and though it is not always articulated in their actions they challenge the misconception that young boys are less emotionally adept than their female counterparts. Their friendship is being threatened however by circumstances bigger than themselves: gentrification threatens the estate and throughout the play you can almost see the construction towers go up and shop fronts closing down around the sacred red pitch.

There is this beautiful rhythm to the drama for each scene punctured by the heavy sound of their hands hitting the metal gate. Music and sound by Khalil Madovi takes over in between scenes accompanied by movement pieces by Dickson Mbi which makes contemporary dance actually look cool. These moments of transition are wonderful moments of creative respite that lifts the simplicity of the set and contextualises the writing, keeping the energy in the room.

You can tell there is trust and generosity between the three actors as each are given their moment to take up space and tell their story. Emeka Sesay as Joey is the comedian, his facial expressions are a joy to watch in the scene where he treks all the way to Camberwell because the local Morley’s has been replaced by a Costa. His utter despair as he tells us that the guy at Costa tells him they sell soup was outrageously good. This monologue was golden in itself but then the laughs aren’t over. Omz, Francic Lovehall, is rubbing his hands with glee and makes his move ogling at his four wings and chips. The audience are practically rolling on the floor laughing at the accuracy of food envy and discomfort.

Red Pitch is currently showing until Saturday 26th March 2022 at the Bush Theatre. To find out more about the production, visit here…

« Previous post
Award Winning Writer, Performer and star of ‘The Witcher’ Julene Robinson talks about her show ‘The Night Woman’ to show at The Other Palace
Next post »
WINNERS ANNOUNCED FOR THE 22ND ANNUAL WHATSONSTAGE AWARDS