Award Winning Writer, Performer and star of ‘The Witcher’ Julene Robinson talks about her show ‘The Night Woman’ to show at The Other Palace 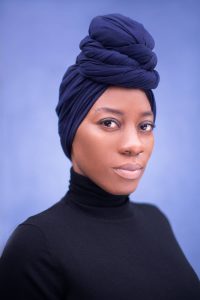 A tale inspired by her very own grandmother’s story of being ostracised for her African spiritual retentions, award winning performer Julene Robinson presents The Night Woman, a culmination of folklore, poetry and songs drawing from her native Caribbean heritage. Initially due to play at this year’s VAULT Festival, which was sadly cancelled due to the ongoing pandemic, the production receives its much deserved debut at The Other Palace Theatre from Friday 11th to Sunday 13th 2022 as part of their VAULT Fest 2022 transfer season. Ahead of the production, Julene tells us more about the show’s two year development journey, exploring her grandmother’s legacy and what to expect!

Hi Julene, your show The Night Woman will play from 11th to 13th March at The Other Palace as part of the VAULT Fest 2022 Transfer Season. How are you feeling?

I am absolutely thrilled, a little nervous – haha – but really excited. I have been working on this show for a few years, developing it at Arcola Theatre, Theatre Deli and most recently as part of Barbican Theatre’s Performance Lab programme. There have been many ups and downs over the past two years, but I am really happy to be working with the absolutely incredible producer Emma Blackman who helped to get this show to this point. Working with such amazing creatives to make an idea come to life is rather humbling but thrilling at the same time and I am revelling in it.

The Night Woman is a play about finding strength in the darkest of moments, and is inspired by the true story of your grandmother who was shunned due to her African spiritual retentions. What inspired you to explore this particular story further and how have you found doing so?

This black woman, my grandmother, who wanted to keep doing black things was thought to be the embodiment of all things bad, and as such was punished, ostracised and rejected. However she was a pillar of strength and a source of comfort for her community. Leaving Jamaica to come to London to do my Masters, I truly began to understand how ‘dark’ being black could be but it conflicted with the way my grandmother taught me to be.  The impact of social media showcasing the violence that black people experience throughout the world was a lot for me and I need to be reminded that dark times can be beautiful times too. Loving happens in the dark and those darkest moments are deeply beautiful moments. As a black woman I am dark. I am loving, smart, emphatic and incredibly creative. This piece is my reminder.  This is my balm to get me through the inevitable dark times and I hope it does the same for others.

The show has been written and directed performed by yourself, directed by Martina Laird, Associate director -Akeem Mignot, produced by Emma Blackman, movement directed by Buntu Yello, with lighting design by Chuma Emembolu, sound design by Bella Kear, costume design by Kinnetia Isidore, photography and media design by Henry Robinson and stage management by Daisy Francis-Bryden. How have you all worked together to realise the show?

I have to say Martina Laird’s leadership, vision and intellect is mind-bogglingly impressive. Working with her is like a cool breeze meditation. She has been able to reveal so much in the script and create some beautiful, vivid and impressive visuals along with Buntu Yello, our movement director who is like water. He is able to take an idea and flow with it to uncover beauty in the body. And all of that coming together with Chuma’s Language of light, Bella’s ear for details and Kinnetia’s vision is what makes this so thrilling. This is a gathering of the exceptionally talented, inspired and driven individuals and we bounce off each other and inspire each other to tell this very important story.

Initially due to be performed at this year’s Vault Festival which was sadly cancelled due to Covid, what does it mean to be able to perform as part of VAULT Fest 2022 Transfer Season at The Other Palace?

It means everything. It means that even in one of the “darkest” times, when people can’t come together and such a vital part of London’s arts landscape is cancelled for the second time, something beautiful will emerge. The Night Woman was selected as the top VAULT FIVE at this year’s VAULT Festival, so I’m so grateful that the show’s premiere hasn’t had to be put ‘on hold’. It meant so much to me to have been invited to The Other Palace.  The NIght Woman to finally come out of the shadows.

What have you learned/taken away from working on the show?

My god, I’ve learnt that I’m resilient. Whew! I have learnt that I truly believe in the principles of this show. Dark times are not all bad and I don’t need to push against it. I believe now more than ever that even though the last few years were full of pain and reasons to rage. I am more than that. We can all be more than rage and pain.

Audience can expect a damn good time. Can I say damn?  With the outstanding sound design of Bella Kear, the show starts with an almost meditative sound bath so that we can all experience a collective moment of rest. Then we go on an exciting journey with Jamaican folk songs and dancing, poetry and thrilling storytelling. It’s beautiful and interesting. A lot of things are flipped on its head. We go deep and come back with a refreshing take.

I want each person to leave this show feeling filled up. Rejuvenated. Audiences will feel empowered when confronted with “dark times” and will be inspired to transform hard times into beautiful ones. You will feel intrigue with a splash of irreverence. You will be moved.

The Night Woman will show from Friday 11th until Sunday 13th March 2022 at The Other Palace. To find out more about the production, visit here…