Lyndsey Turner’s revival of After the End couldn’t have been better timed, what with post-lockdown, outbreak of war, the scandals in the Met office and the rise of “incel” culture. Dennis Kelly’s play premiered in 2005 and that’s what the reviews said then. I guess this might make After the End timeless. 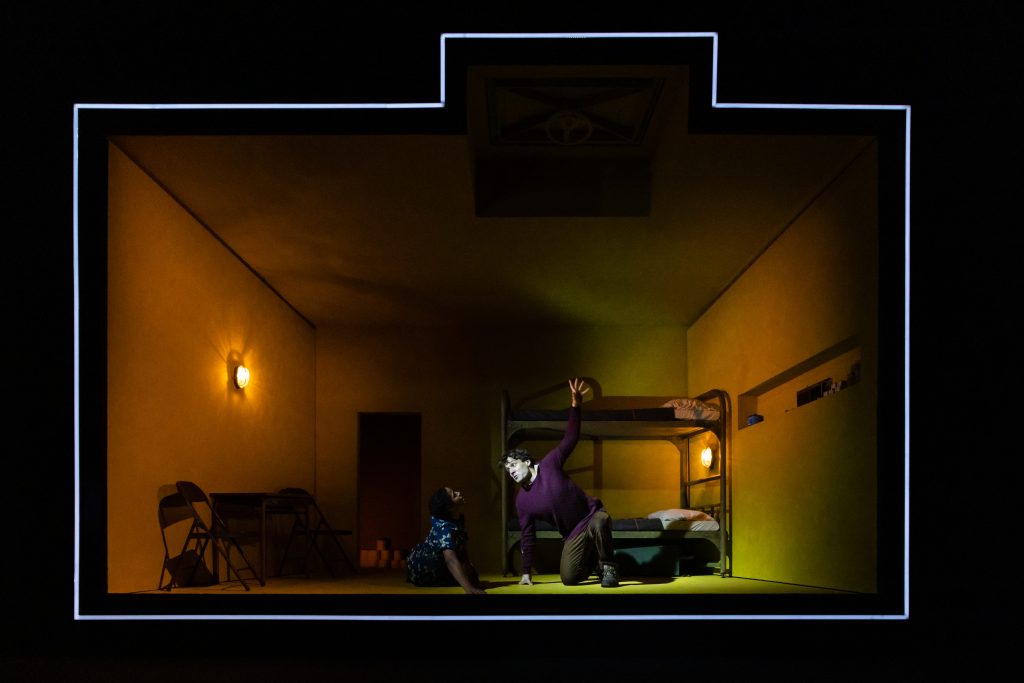 A nuclear blast takes place on the same night of Louise’s leaving drinks. “But I’m starting a new job Monday.” She never makes it. Thankfully her former colleague and friend Mark has everything in order, he serendipitously has brought a flat which happens to have a nuclear bunker in the garden attached and he’s somehow had the foresight to have it kitted out with tinned food, radio and a first-aid kit. Louise is distraught but she’s grateful to Mark. However, tensions rise understandably, so when confined with any person in a small space for a long period of time – a lot of us know this now first-hand – things take one unexpected turn after another, and another, and another. All the while, supplies are limited and we see the extent Louise is willing to go to, to cling on to not only survival, but her humanity.

The whole production runs like clockwork, each part contributing to the entire spectacle, it is gripping and has us on the edge of our seats the entire time. The eery thrumming of the music as a new boundary is crossed is terrifying. Likewise, the use of lighting to mark the turning point really is the stuff of nightmares. After the End is the most horrifying thing I’ve seen on stage to date. Amaka Okafor and Nick Blood are perfectly cast for their roles and the fluctuating power dynamic between the two is electrifying.

It is one of those plays where you have to talk about it afterwards because of the layers to the action, the writing, the characterisation, the plot – the ethics. This is an excellent piece of theatre which demonstrates the cost of everyday rhetoric and jokes which rely on dehumanising groups of people or on the pure value of shock and taboo and maps the culture to its logical end. I do have some ethical qualms however about the amount of violence shown on stage, the assumed power imbalance, and the way the perpetrator-survivor relationship is depicted. Parts of it does seem glorified, designed to push limits for the sake of pushing limits and falls into some typical women in horror tropes which is a shame seeing as the story is a stand-alone success, so I will say mind the content warnings before you book.

After the End is currently showing until Saturday 26th March 2022 at Theatre Royal Stratford East. To find out more about the production, visit here…

« Previous post
PSYCHEdelight Theatre Makers Mohand Hasb Alrosol Abdalrahem and Peter Pearson talk about working together on ‘Mohand & Peter’ to play at Southwark Playhouse
Next post »
Award Winning Writer, Performer and star of ‘The Witcher’ Julene Robinson talks about her show ‘The Night Woman’ to show at The Other Palace