Six years on from NFL player Colin Kaepernick’s brave decision to take the knee in protest to police brutality and inequality, particularly post pandemic and the Black Lives Matter movement, movements revolving around civil rights continue to take shape, conversations on race pertinent as we rebuild moving forward. Announced winner of Theatre503’s International Playwriting Award during the height of the pandemic, graduate of the Carnegie Mellon School of Drama and activist Pravin Wilkins receives his much deserved debut of play Moreno, a commentary on theatre of sport and political protest. 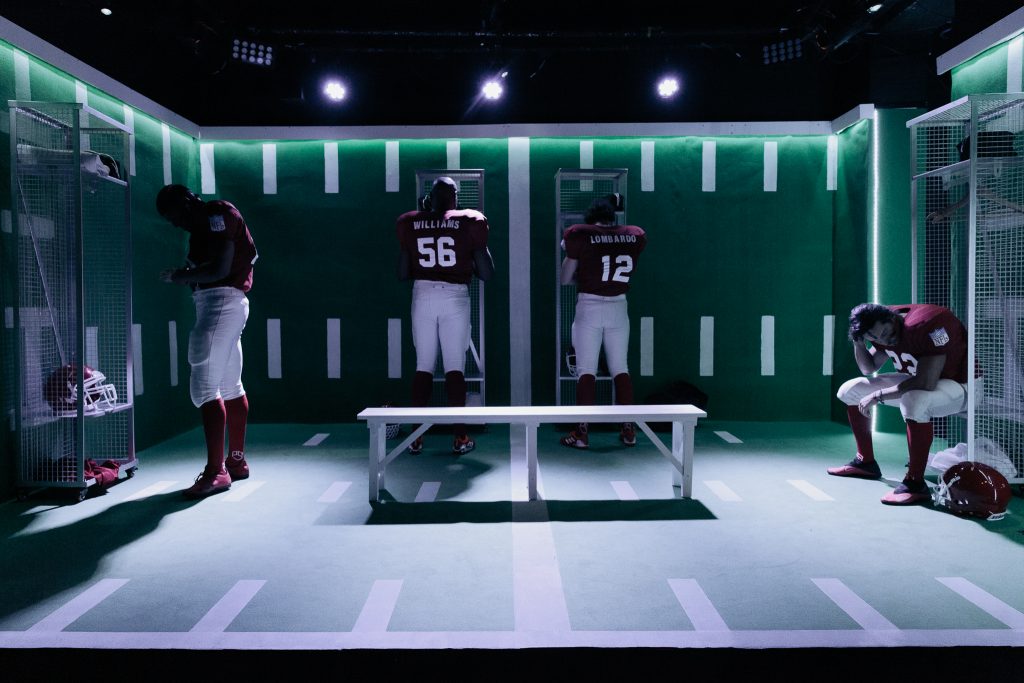 New superstar signing Moreno (Sebastián Capitán Viveros) is an instant fan favourite, packed full of charm and charisma on the sporting field as well as off, it’s very clear just how much he enjoys the element of fame that comes with playing the US’s signature sport. His signing shaking up the team’s dynamic, as the established ensemble work to figure who the new guy on the block is, and what makes him tick. Mainly based in the locker rooms behind the scenes of the team’s various heats, the global becomes instilled into the strategies, tactics, training and decisions made within the team – the quartet a slice of the overall team, all bringing with them their own ideologies as to how the game should be played and how they all take on their roles as ambassadors of the sport.

Wilkins intelligently carves out the worlds of these four young celebrities, all from various walks of life banded together by their love of American Football. Hayden McLean‘s cheerful Cre’von Garcon, Matt Whitchurch‘s ambitious Danny Lombardo, Joseph Black‘s authoritative team leader Ezekiel Williams and Capitán Viveros’ flamboyant Luis Moreno fascinating in their clashes and disagreements as well as their moments of unity. We as the audience figure it out as they do, there’s no clear answer as to how they all band to share the same vision, the topic of race a heavy one as Kaepernick’s protest slowly ripples throughout the season and industry. Talk of who stands with his movement the elephant within the room, the debate as to whether sport should solely be a form of entertainment or a platform to discuss societal issues a complex one, and this is fascinating to watch. Director Nancy Medina transports the bravado and energy of the game to Theatre503’s fringe space, the show bringing with it a Netflix, Americanised dramatic feel that brings a cinematic gloss to the space. Ingrid Mackinnon‘s fun yet competitive movement direction plays on the team’s athleticism and is teamed brilliantly with Duramaney Kamara‘s bold R’n’B/Hip Hop inspired playlist consisting of some of the US’s well known music artists, from Kendrick Lamar, to Drake, to 50 Cent. Aldo Vazquez‘s green pastured, white striped stage design intertwined with the generic, metallic nature of the changing room entertaininly roots us within the cast’s sporting world. Moreno a sign of the times, a show that leaves you thinking post show  and about the role of sport societally.

Moreno is currently showing until Saturday 26th March 2022 at Theatre503. To find out more about the production, visit here…