An outrageously funny and philosophical piece of gig theatre which incorporates an eclectic mix of performance art, live music, stand-up comedy, and video installation with smoke machine galore and plenty of white discomfort to go around. South African born, Swiss based Ntando Cele comes on as her alter white ego Zimbabwean Bianca White in a dragged-up inversion of blackface. Refreshing and a must catch on until Saturday 12th March at the brand spanking newly revived theatre Brixton House, formerly Ovalhouse, they’ve opened the season strong with Black Off. 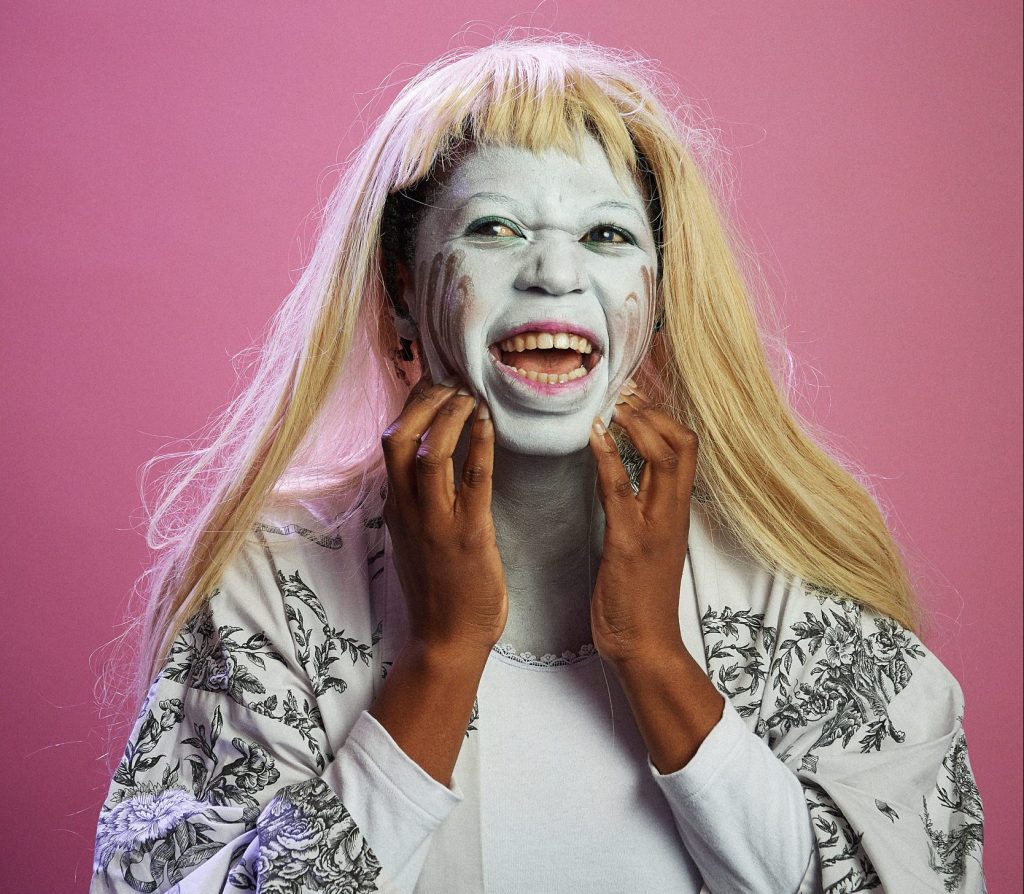 The tall black box theatre is sparsely filled with a live band playing music on stage right, a mic centre stage, and a dressing table with a camera facing towards the audience on stage left. There are various props scattered across the scenery and it feels like an avant garde set. I am ready for something radical. The video introduction acts as a curtain raiser as a man speaks to camera and very calmly explains that the best thing to be is a white man, because when a white man draws a flower, it’s a beautiful flower but when a woman paints a flower it’s her vagina and then when a black person paints a flower it’s a n[-word] flower. It is actually body shakingly hilarious and it perfectly sets the tone for the rest of the show.

Cele is outstanding in her performance of alter-ego Bianca White. The whiteface makes your skin itch as you search for where the paint ends into the corners of her watery blue eyes and the small think cracked pink smile. The blonde wig and kimono gives the character an air of drag that is exquisite to watch. In itself that is performance art. From drag race to punk singer Vera Black, Cele performs with her whole body and spirit, her physicality is played like an instrument, her face distorted to unfathomable ends, and she aptly quotes Black Skin White Masks by black philosopher Frantz Fanon.

Bianca opens the show in the standard stand-up form introducing herself, few jokes about the sorry state of the United Kingdom, a bit of audience interaction and then in between jokes and often through them she philosophises, dissects, and scrutinises the phenomena of whiteness. Rather than placing her psychology under the microscope she studies the white man and their need to distinguish people by race, their fetishist notions of whiteness and their obsession with other cultures. It is so refreshing to have a black woman turn the tables and do it with such joy and release I experienced a feeling of catharsis with her.

Black Off is currently showing until Saturday 12th March 2022 at Brixton House. To find out more about the production, visit here…