Kaash returns to the Southbank Centre for Pandit Ravi Shankar’s 100thbirthday celebration with sophisticated ferocity. Rooted in the South Asian classical dance form Kathak, the show delights and wonders senses accustomed to western rhythm. His first full-length play Kaash is an important milestone for the now distinguished Akram Khan and it is a treat to see it again today to see how it all began. It is comforting that his signature remains unchanged in his steady devotion to accessible contemporary world-class dance drawing from his heritage in the subcontinent of India. 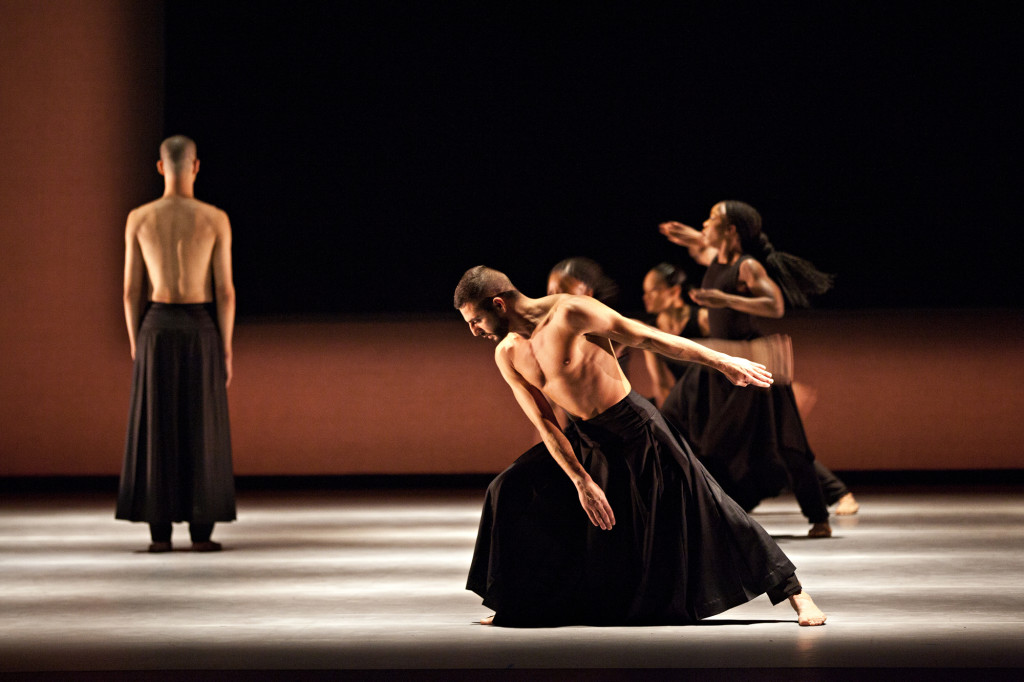 The melody and movements are stoic and full of reverence with the dancers adorned in black billowing clothes and the three male dancers with bare chests and shaved heads. There is little ceremony in the production which works well. Anish Kapoor’s set design looks like a fabric plane with a black square painted on it giving the illusion of depth and endlessness. Reminiscent of the black hole, it mimics something bigger than the universe.

Originally created drawing on Hindu mythology and the eternal cycle of creation and destruction, this is clearly illustrated in the dance piece. Kaash features the common theme of circular movements largely using the upper body and a wonderful sweeping of hands and arms that create a wondrous blur effect that lifts the performance into some spiritual realm where these dancers are so full of grace and light, they leave humanity behind. There are non-human animal motifs where one hand raised above the head curled up to mimic the head of a snake that engage with the music in such a way that the audience are transported to tropical habitats and though the set and costumes are black and greyscale, the dance sparks to create heat that is magnetising.

The countdown of the Kathak music is hypnotic and trance-like. There are enthralling sections of explosive music where tempo moves the dancers like clockwork in an ungodly speed, and they do it with such precision! And then moments of stillness that stretch on with one solo dancer, no backing track, the spotlight is on the movement alone. These sections require a lot of patience that will be tiresome for some.  The ending is understated after a short burst of choral delight as the lighting by Aideen Malone finally injects some colour into the performance.

A beautiful dance piece I hope to see revived time and time again and a wonderful tribute to Pandit Ravi Shankar and Indian classical music. I can’t really imagine a more fitting tribute.

Kaash (Revival) is currently showing until Saturday 23rd April 2022 at the Southbank Centre. To find out more about the production, visit here…