Whatever your dreams or aspirations may be, the thought of achieving said accomplishment/s powers the everyday, the pursuit of stardom one familiar to many, the realities of holding down a day job whilst auditioning for that possible career changing role one that many within the arts can relate to. A tender observation of pursuing one’s dream with the day to day realities of managing a pub, writer Helen Cunningham presents The Queen’s Arms, a familiar, thoughtful take on the hospitality teams that help make our days run that bit more smoother. 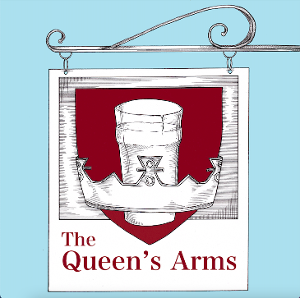 In between the realities of pulling pints and pursuing the acting dream, The Queen’s Arms charm lies within the hours of conversation had by the aspiring artsy team – Mags (Helen Cunningham), Joe (Jacob Wayne-O’Neill) and Jess (Verity Major) passing the time with comical anecdotes, pub regular George (Jamie Sandersfield) educating all with his crossword know-how and Bernard (Jan van der Black) a keen, friendly dynamic in need of a job role post study. The pub itself serving as a sort of in-between, as if time itself slows down and a world is created within it. Interactions between the team is the production’s integral feature, Cunningham writing an honest, relatable piece set on giving the ensemble their moments to shine.

Cunningham’s sarcastic Mags, Wayne-O’Neill’s unfiltered Joe and Major’s bubbly Jess all deal with the precarious nature of the arts in their own way, Sandersfield’s considered George and van der Black’s loquacious Bernard are outer energies that have the potential to shift the evening’s dynamic, however the evening remains the same energetically. The production embodying a sustained quality, we pick up on the long pauses between customers visiting the establishment and how the team grapple with this. As this is the evening’s set up, the pacing of the production can sometimes seem slow, and could therefore be a lot slicker. As previously mentioned, this is a show about the characters that bring this establishment to life!

The Queen’s Arms was shown from Tuesday 19th until Saturday 23rd April 2022 at the Drayton Arms Pub Theatre. To find out more about the production, visit here...