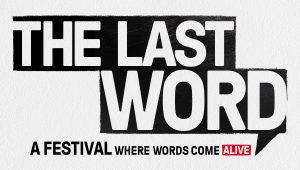 Returning for their latest edition, The Roundhouse’s The Last Word Festival will take over the iconic venue from the 9th to the 23rd June, some of London’s most vital voices including The Receipts Podcast, BBC Radio 1xtra’s Richard Brave, founder and authors from A Quick Ting book series hosting talks exploring some of society’s most pertinent issues. Alongside these discussions, workshops led by writer and performer Jack Rooke and the ‘Letters to the Earth’ team will inspire and support writers looking to further perfect their craft, the Roundhouse’s renowned Poetry Slam yet again searching for the next young pivotal voice to be crowned Slam champion. New works – Sankofa: Before the Whitewash by Abena Essah, Matriarch by Keziah Hodgson and Gardens + Other Such Tree Places by Ruth Awolola all due to debut at the event. Ahead of the festival, senior producer Jack Prideaux tells us more about what to expect!

Hi Jack, you’ll be hosting this year’s The Last Word Festival from 9th to 23rd June. How are you feeling ahead of the event?