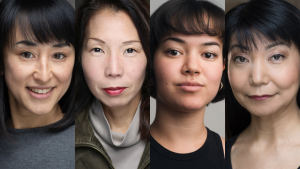 Shōwa era Japan (1926-1989) – ruled by Emperor Hir0hito witnessed the transition from empire pre-WWII to state post war, the impact of their defeat in the war one that would shape the course of future generations, migration a means for many to seek a hopeful future. In 2020, New Earth Theatre launched an oral history project that resulted in over 30 Japanese women being interviewed about their experiences of being a migrant in the UK – a perspective we seldom hear and one that is vital for addressing representation within the arts. Created in response to this project, New Earth Theatre present Tsunagu/Connect Live – an immersive, promenade work placing the voices of four Japanese women at the fore featuring performers Tomoko Komura, Meg Kubota, Yuki Sutton and You-Ri Yamanaka. Currently showing at Shoreditch Town Hall until Saturday 30th April, cast member Meg tells us more about what to expect!

Hi Meg, you’ll be starring in New Earth Theatre’s Tsunagu/Connect Livefrom 23rd to 30th April at Shoreditch Town Hall. How are you feeling?

We opened on Saturday with 3 shows, and I feel relieved now that we’ve opened. It was amazing to have the audience watching and coming on the journey with us. Our show is quite interactive, so it makes a huge difference to have the audience there. Within the three shows on Saturday, we fine-tuned our performance with the feedback we received, so I feel the show is getting better and better.

Tsunagu/Connect Live is an immersive promenade performance led by four Japanese women as they guide audiences on a journey across continents and decades, the show an attempt to bridge the gap between Britain and Japan and explore the complex, multi-layered reality of migrants reconciling with rootlessness. What inspired you to be a part of the production?

As one of the directors Kumiko Mendl said, the stories of Japanese immigrants in the UK has hardly been discussed up until now, let alone Japanese women. There’s been very little exposure about their stories. As an immigrant myself, I felt intrigued about the history of the Japanese immigrants in Britain, and the stories behind each individual. I was lucky enough to be asked to be involved in the project early on, so I seized the opportunity. All the interviews with the Japanese women are captivating. It was wonderful to hear other people’s experience of coming to the UK and settling here. All the women who have been interviewed are truly amazing!

You’ll be taking on the role of a tour guide with fellow cast members Tomoko Kumura, Yuki Sutton and You-Ri Yamanaka. How have you prepared for the role and how have you worked with the fellow cast to realise the show?

We had a couple of research and development weeks since we started the process last year, to explore the theme of Japanese women migrating to the UK, and the journey has been thought-provoking, inspirational and fascinating. In terms of preparing for the roles for the theatre piece, which happened in the few weeks’ rehearsal period run up to the performance, I used a variety of techniques to find different qualities about the number of roles I’m playing. I tried to differentiate the roles as much as possible, while keeping each character’s truthfulness and through line of thoughts. I also focused on the stories we were telling in each scene. A friend who came to see the show on Saturday, has specifically commented on how well the four of us work together, and I think she’s right. We were very lucky to have a group of such supportive, giving and talented actresses. It’s been a lovely experience to work with my fellow actors.

New Earth Theatre’s Artistic Director Kumiko Mendl and Kazuko Hohki have co-created and directed the piece, Sachi Kimura has directed movement, Stewart Melton has supported with dramaturgy and writing the piece, TK Hay with design, Nao Nagai with sound design and Ting Ying Dong with movement direction. How have you all worked together to realise the show?

It’s been wonderful working with such talented group of East Asian and non-East Asian creatives. Kumiko and Kazuko created a space where we could all contribute to the creative process, which allowed this show to turn out to be a truly ensemble piece. I don’t think any of us could have done it without any of the people who were involved. This includes people in the production office as well, who worked tirelessly to make the show work. Our rehearsal space was always a generous, supportive and kind space, which made working on the show a pleasant experience.

Just the joy of working on a piece that’s relevant to your background and being able to tell a story of a community that you are part of.

The audience can expect a funny, exhilarating and at times a moving theatre piece. It’s a show that would keep you on your toes and surprise you at every turn.

I think that’s up to each individual audience, but hopefully they’ll be entertained first and foremost, and that they’ll get a tiny taste of what it’s like to be a Japanese woman living in the UK.

Tsunagu/Connect Live is currently showing until Saturday 30th April 2022 at the Shoreditch Town Hall. To find out more about the production, visit here…