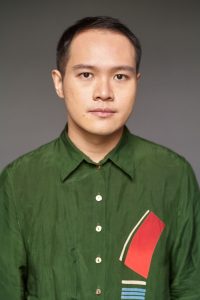 Championing new works by British East and South East Asians (BESEA) and British Muslims, Ellandar Productions are committed to producing works seldom told on our stages, their debut work – No Particular Order an exploration of global politics and the rise of authoritarianism. Written by Papatango Prize 2019 finalist and former Associate Artist of Singapore’s renowned Checkpoint Theatre Joel Tan, the show spans 320 years, delivering snapshots of both a recognisable world and visions of the future. It charts the rise, fall and continuation of a nation, always asking the same question “Is it empathy or power that endures?” Ahead of the show’s run from 31st May to 18th June at Theatre503, Joel tells us more about exploring the show’s narrative further, founding his vital theatre company Ellandar Productions, working with the creative team to realise the show and what audiences can expect.

Hi Joel, your show No Particular Order will show from the 31st May to 18th June. How are you feeling?

I’m nervous and elated. It’s been a long time since I’ve been able to work on a show, and Josh and I have been looking to get this show made since 2018, so it’s all quite surreal.

No Particular Order is told from an unnamed place and spans 320 years, delivering snapshots of both a recognisable world and visions of the future. It charts the rise, fall and continuation of a nation, always asking the same question “Is it empathy or power that endures?” What inspired yourself to explore these themes further?

It hit me one day that all my life I’ve grown up in a world saturated with war, unrest, upheaval. It’s touched all of us, in varying degrees. One of my most potent childhood memories is of being at the airport sending an uncle off for a tour of duty in Kuwait in the 90s. At the heart of it is an unfettered will to power, which living in Singapore I recognise as an inhumane, distorting force. I wanted to write a play that lamented all of that, somehow.

Supported by Theatre503, this marks Ellandar Productions’ debut work. An organisation committed to championing work by and for British East and Southeast Asians (BESEA), what does it mean to have set up this platform addressing diversity?

On my end it’s been very heartening to see Ellandar’s commitment to implementing diversity goals directly in their producing practices. Beyond just “addressing diversity,” there’s a real sense of purpose here to push through stories, people, and even ways of working that would ordinarily have been left behind. I’m confident the work will be utterly unique as a result.

The production is directed by Joshua Roche, with production design by scenographer and designer Ingrid Hu. How have you worked with the team to realise the show?

Josh and I have been working on this for a long time, and he’s been my point person for shaping this play since we were introduced by Steve Harper at Theatre 503 in 2018. It’s been one of my most rewarding writing experiences so far, to have a director as sharp and imaginative as Josh slowly shape this with me over the years. We have a really intuitive shared understanding of the play, so I feel really supported and safe. And with Ingrid, the conversation’s gotten even more robust. The three of us have had a number of really fun and stimulating chats about what the gesture of the show as a whole might be, and how every choice might be saturated with the same language.

What have you learned/taken away from working on the production?

Mainly the joy and privilege of working with this team of theatre producers and artists who in their different capacities are so daring, imaginative, and giving. It’s been so long since I’ve worked on a new play like this and this process has given me a lot of energy, and it’s making my brain fire up in so many different ways.

Something gorgeous and imaginative, hard-hitting and visceral, the joint work of this team of artists, both on and off stage.

I hope an audience might see lots of themselves, their own histories, in the play’s depictions of a world in conflict, which may seem at first really odd and unfamiliar, or really far away, but that’s obviously as close to each of us as our own skin.

No Particular Order will show from Tuesday 31st May until Saturday 18th June 2022 at Theatre503. To find out more about the production, visit here…