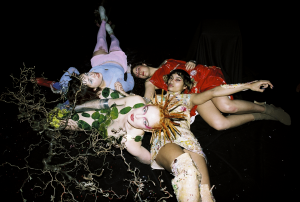 Renowned for its platforming of unique, experimental and exciting talent, Sadler’s Wells’ Wild Card series returns with their latest instalment, produced by the visionary visual artist Livia Rita who presents FUTURA Glitch, the show an extension of Livia Rita’s soon to be released album FUGA FUTURAand a collaboration between musicians, designers, dancers, writers, thinkers, and activists. The show looking to create a mythology populating the Lilian Baylis Studio with unearthly creatures that build bridges between worlds. Ahead of the performance showing on the 12th and 13th May, Livia Rita tells us more about the show’s collaborative nature, exploring creating her own eclectic genre-defying sound within her music and what audiences can expect!

Hi Livia! You’ll be presenting FUTURA Glitch as part of Sadler’s Wells’ Wild Card series on the 12th and 13th May, how are you feeling ahead of the show?

Wild, on fire! Feeling overwhelmingly grateful to be able to expand FUTURA (the world/ future mythology of my work) beyond limits I’ve experienced in the past and invite other collaborators to interweave their practises with that ecosystem.

I’m super excited, but also nervous and a touch anxious. So far it feels like most of the show still only exists in my mind – the prep has been a total exercise in imagination, and a lot of the ingredients only come together in the days before the show. I tend to always go for very ambitious ideas, and have a real desire to overwhelm with maximal emotional experiences, so I definitely have to learn to handle the nerves that come with that…

FUTURA Glitch is a collaboration between musicians, designers, dancers, writers, thinkers, and activists. The show looking to create a mythology populating the Lilian Baylis Studio with unearthly creatures that build bridges between worlds. What inspired you to explore this further?

FUTURA Glitch is an expansion of the world of mythologies and characters from my upcoming debut album FUGA FUTURA, which encompasses my fears and dreams for the future. The climate emergency makes me feel an urgency to actively reflect and engage with nature, especially because nature is a main source of my creative inspiration.The FUTURA creatures and lyrics/spells accompany my journey of healing, growing up, orientating myself in an apocalyptic landscape, intertangling with nature… It comes from my personal narrative of searching for who I am and finding my own way in an overwhelming world.

As mentioned, FUTURA comes from my debut album FUGA FUTURA. From there, I started envisioning how the sounds, songs, and spells would translate to the visual sense, creating the dance choreography, ArtFashion, prosthetics, game cards, newspapers, and more. It’s really been an exercise of the imagination, to manifest physically the emotional world of the music, to build these dreams so they take more and more tangible forms! I’ve had the joy of inviting collaborators, and have had a lot of inspiring telephone exchanges that spill into the creation of this collective world.

You will release your debut album FUGA FUTURA in July 2022, a conceptual album described by yourself as ‘A place of healing and fantasy, where nature rebels and magic abounds all in an attempt to unite otherworldly revolutionaries’. And as someone looking to form your own eclectic genre-defying sound, what has the journey been so far in terms of achieving this?

It’s been a step-by-step journey of learning and following very instinctively one’s desires and curiosity! I’m attracted to what feels new to me within the arts, and try to stay away from obvious references, associations and previous boundaries and be as all-encompassing as life is.

We will release the full album this summer on July 28th, with two singles before then in the coming months. After a UK tour in May / June, we will also be bringing the Sadler’s Wells performance to Colour Factory on 28thJuly, including some of the same performers, so you can catch it there if you miss the Sadler’s Wells show!

FUTURA Glitch is about world-building, metamorphosis and glitching into alternative ecosystems to enact the future in the present. With my work, I unite the forces of mystic Eco-Pop music, dance, and ArtFashion(what I call my wearables) for soft raving.

You can expect an immersive, collective experience that weaves together various artistic mediums to explore future identities, create deeper connections with nature and search for new forms of togetherness without losing our sense of self.

FUTURA Glitch is about rewilding —through exploring new connections with personal identities and with nature. Its message is to go beyond social dictations and polarisations of genders. Its message is one of self-empowerment, but with awareness, that not everything is in our control. And to seek a larger power that lies in the collective.

Wild Card: FUTURA Glitch will show on Thursday 12th and Friday 13th May 2022 at Sadler’s Wells. To find out more about the production, visit here…

« Previous post
DENZEL WESTLEY-SANDERSON, WINNER OF THE RTST SIR PETER HALL DIRECTOR AWARD 2021, TO DIRECT THE IMPORTANCE OF BEING EARNEST
Next post »
Writer Joel Tan talks about his show ‘No Particular Order’ to show at Theatre503