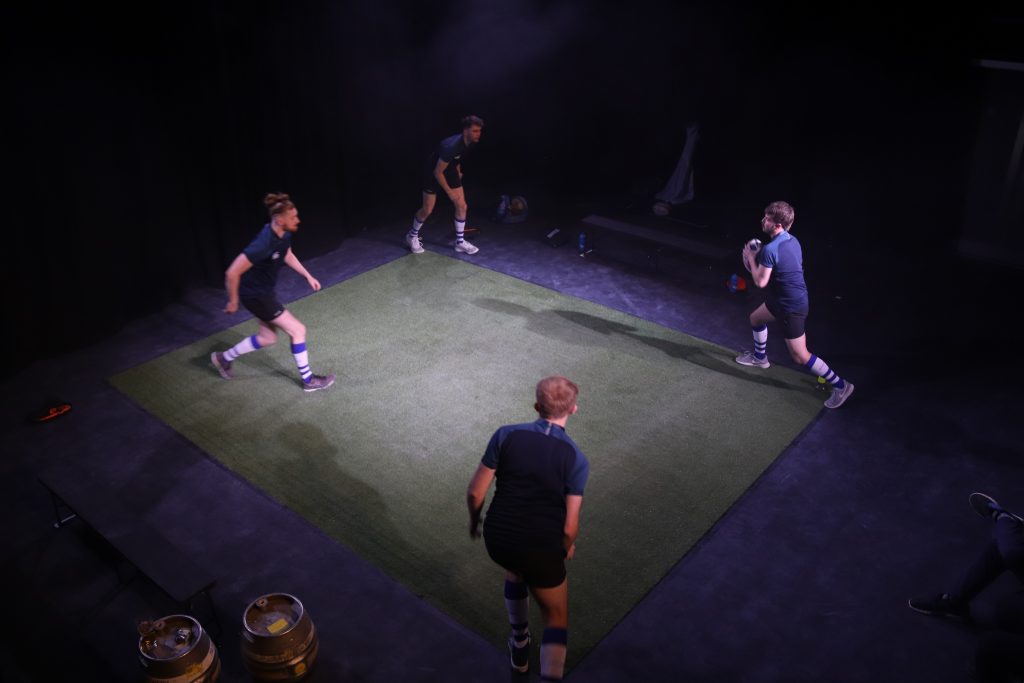 Underneath the bravado and machismo, it becomes clear that rugby teammate Ed (Ronan Cullen) grapples with a weighty truth, the team gearing up to play in the rugby regional semi-finals and therefore a time that calls for all to be on the same page, training sessions and nights out at the pub revealing that something isn’t quite right. The veil slowly beginning to slip and with it uncovering issues of anxiety and depression, issues that materialise themselves by unexplainable low moods, avoidance, isolation and reliving past traumas amongst other symptoms. Aaron Woods writing an honest account of how these issues manifest, and the often confusing nature of said illness experienced due to its invisibility and those around them trying to attempt to process what is happening. The challenging of toxic masculine qualities, ie insults and thoughtless jokes hurled at anyone trying to attempt to explain how they feel, showcasing the realities of not being able to express how one feels on a small and wider level. Daniel Blake directing an energetic hour supported by JP Riley’s heart thumping electronic score.

Cullen’s Ed, Sam Hoult’s Charlie, Ainsley Fannen’s Will and James McKay’s Ollie engagingly showcasing this heartwarming tale of brotherhood and mental health, the quartet united, clever physical theatre segments heightening the show’s athletic nature, the symbolism of ‘the scrum’, a trademark feature of a rugby match one that stays in mind, the idea of a supportive team and network integral within Ed’s well-being process – sport as medicine. The standing ovation at the end going to show just how necessary and engaging this work is! A vital safe space created to explore the unsaid!

Bones was shown from Friday 6th until Sunday 8th May 2022 at Theatre Peckham as part their Peckham Fringe Festival. To find out more about the production, visit here…