A packed line-up of 34 hit West End shows has been unveiled so far ahead of this year’s West End LIVE, a free and unticketed celebration of London’s world-leading theatre scene which comes to Trafalgar Square on the weekend of 25 and 26 June. More acts are due to be announced in the next few weeks, as London gears up for the biggest ever West End LIVE. 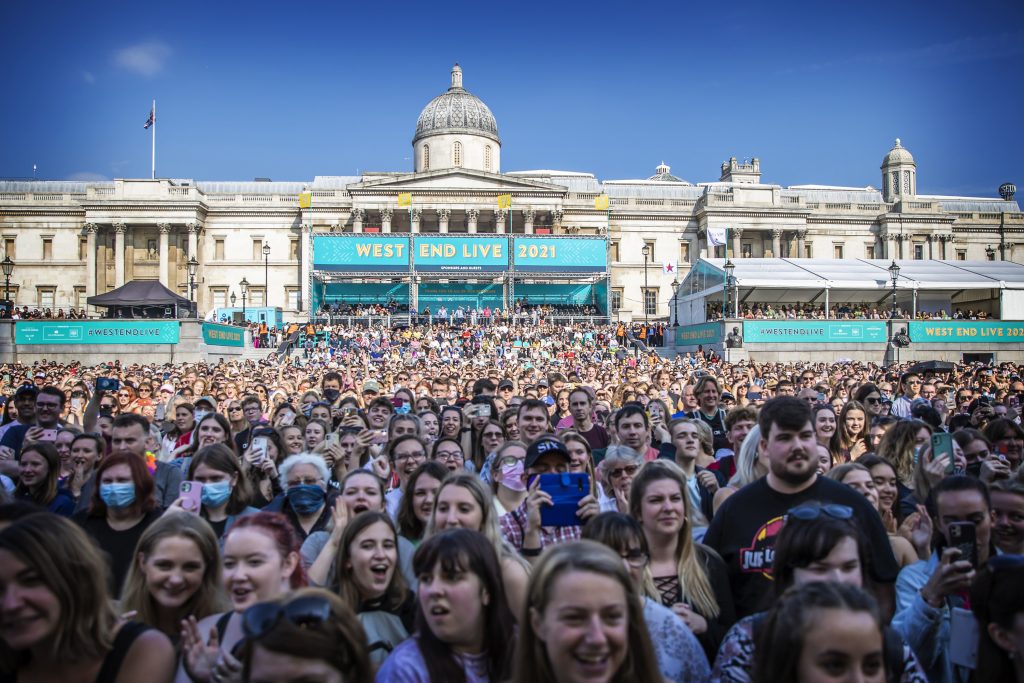 Tens of thousands of theatre fans are expected to flock to the capital for this year’s musical theatre spectacular, enjoying free performances from dozens of top shows – from long-running favourites Hamilton, Les Misérables, Wicked, Six, The Book Of Mormon, Disney’s The Lion King and Matilda The Musical, to new shows making their West End LIVE debut, such as Moulin Rouge! The Musical, Legally Blonde, My Fair Lady, Disney’s Beauty And The Beast, Back To The Future – The Musical and Get Up Stand Up! The Bob Marley Musical.

This unique event, a joint production by Westminster City Council and the Society of London Theatre (SOLT), unites London’s theatre industry every year and brings people of all ages into central London to experience the best of the West End – from the city’s unparalleled culture scene to food, drink, fashion, nightlife, retail and more.

As excitement builds for West End LIVE, anyone visiting central London in the next couple of weeks – and who happens to look up – might catch one of a series of surprise, pop-up performances by West End shows on iconic London rooftops, an opportunity to get a feel for things to come from one of the world’s most spectacular outdoor theatre events. Details for these ‘Sing it from the Rooftops’ events will be teased before each appearance on the West End LIVE and Official London Theatre social channels, and anyone lucky enough to witness one will be in with a chance of winning a West End LIVE queue jump. The first pop-up performance will take place today (Wednesday 25 June) at 4pm, in Covent Garden’s famous piazza on the SUSHISAMBA balcony.

Sky VIP are welcomed back as sponsor for West End LIVE 2022, having also supported last year’s event. Once again, they will be offering their customers the chance to watch from the exclusive Sky VIP viewing area onsite, plus win some fabulous prizes.

‘London’s theatres are the envy of the world, and West End LIVE is a highlight of the theatrical calendar for so many – not just the countless fans who converge on Trafalgar Square to enjoy a wealth of incredible live entertainment, but also the hundreds of performers and crew involved in putting on what is always an unforgettable weekend. We are delighted to continue to work so closely with Westminster to deliver West End LIVE, and hugely grateful for the support of Sky, who have a long history as champions of theatre and the arts.’

‘West End LIVE is a much-loved annual event that brings together the musical theatre community in celebration of the world-class theatre we have right on our doorstep. One of the main aims the new administration has for the council is to make culture, arts and leisure accessible to everyone living in Westminster, not just the few. We want to encourage all residents, especially those in disadvantaged communities, to participate and join in cultural opportunities and big, fun events such as West End LIVE so we can bring all our communities in Westminster together.’

‘Sky is delighted to be part of West End LIVE again. This annual celebration of London’s world class theatre is a fantastic event and a highlight in the arts calendar.  It’s a great opportunity for us to host and thank our customers, getting them closer to the entertainment they love through Sky VIP.’

Official London Theatre will be backstage throughout the West End LIVE weekend sharing exclusive behind-the-scenes content across our social channels.

West End LIVE remains free and unticketed as in previous years. The event will be BSL interpreted by Sue MacLaine, Marco Nardi and Caroline Richardson.

Back To The Future – The Musical

Disney’s Beauty And The Beast

Bonnie And Clyde The Musical

The Book Of Mormon

The Choir Of Man

Fantastically Great Women Who Changed The World The Musical

Get Up Stand Up! The Bob Marley Musical

The RSC’s Matilda The Musical

Only Fools And Horses The Musical

The Phantom Of The Opera