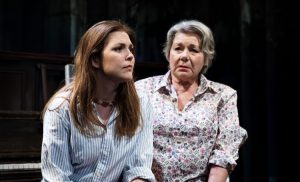 Our families are what keep us rooted, often our first interaction with the wider world, here is where initial meaningful connections are formed. Marking the re-opening of the Arcola Theatre with their spring season, Barney Norris returns with the premiere of his latest work We Started to Sing, a piece tracing the distance that grows amongst a family over 3 decades as they pave new lives for themselves across the UK. Having recently just opened, the production plays until Saturday 18th June. Forming part of the production’s ensemble, cast member Naomi Petersen tells us more about what inspired her to take part in the show, what preparing for her role involved and what she’s learned from the creative process.

Hi Naomi, you’ll be starring in Barney Norris’ We Started to Sing, which marks the re-opening of the Arcola Theatre from 19th May to 18th June. How are you feeling?

I’m feeling extremely lucky. I’ve been a big fan of Barney’s writing since I saw his play Visitors in the same venue back in 2014, and it’s a total joy to work on such a beautiful piece with this wonderful team of people. It feels like a very special job. Barney and I have actually made a show in the Arcola before, long ago – we’ve previously worked on two projects, a show at the Lyric Hammersmith and a Miniaturists play at Arcola – so it’s great to be reopening the theatre because I do feel like it’s part of my history, so it’s meaningful to become part of its history in turn.

We Started to Sing traces the distance that grows amongst a family over 3 decades as they pave new lives for themselves across the UK. What drew you to take part in the production?

I’d been longing to work on one of Barney’s plays anyway, but it was a complete no-brainer as soon as I saw the script. It’s such a rich, delicate and moving piece of work about the ties that bind our lives together.

All of the cast are named as ‘actors’. What has preparing for your role involved?

It’s been a unique experience because the play is extremely personal, and all the characters are actual members of the writer’s family. So, there’s been such a huge wealth of history and knowledge to draw from as we’ve been exploring the memories that make up this story. I play Fiona, who is Barney’s mum in real life, so preparation has involved taking real ownership of the character while still trying to honour the essence of these real people. In bringing these memories to life this has now become our story too.

Your fellow cast are – Barbara Flynn, David Ricardo-Pearce, George Taylor and Robin Soans. With production design by Frankie Bradshaw, lighting design by Bethany Gupwell, sound design by Jamie Lu and production management by Josephine Tremelling. With the show been written and directed by Barney Norris. How have you all worked together to realise the show?

We are telling the story of a family, and so in order to do that we’ve worked hard to become a family ourselves. Everyone has spent a lot of time together in rehearsals, particularly the acting company, we are sharing all the time we can so that our relationships can start to feed the relationships we play onstage. We all went on a field trip together and ran the play in a wood and cooked for each other, trying to build up the idea that we are a family like the people we’re playing. Which has been brilliant, because Robin and Barbara are excellent cooks!

Working with wonderful actors is always an education, and this company have been fantastic to work with. I’ve developed a lot of the way I approach making theatre through my collaborations with Alan Ayckbourn in Scarborough over the last few years, and have taken that process into these rehearsals, but the life and joy in a room comes from working with other actors, and there has been a lot of it so far on this show.

We want audiences to be brought into contact with a family trying hard to love each other as best they can, and through this to be led into thinking about their own family, their own lives. I think the play is a celebration of the way people love each other, but also an elegy about the way all that love and shared time does disappear, too – which seems all the more poignant after a period of time when we have all been kept apart, when we haven’t been able to share time with everyone who matters to us. We hope the play will help people think about who matters to them.

We Started to Sing is currently showing until Saturday 18th June 2022 at the Arcola Theatre. To find out more about the production, visit here…