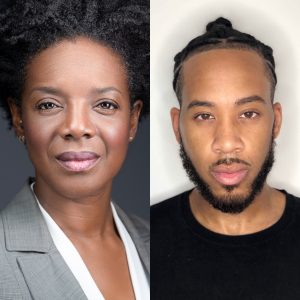 Childhood is where we often establish life long friendships, a formative aspect of our lives, the school setting offers an integral opportunity to not only learn, but socialise. From a young age, we also begin to pick up on societal cues, cues that determine our life paths and shape daily interactions. Having debuted their production Playfight last year, Orisun Productions, consisting of producer Shereener Browne and director Leian John-Baptiste present an examination of the corrosive way in which racism determines the direction Black lives take, the show following best friends Kai, TJ and Zara who initially inseparable encounter change that challenges this. Currently playing at Theatre Peckham as part of their fringe festival, Shereener and Leian tell us more about the show’s pertinent topic, taking part in the inaugural Peckham Fringe Festival and what audiences can expect!

Hi Leian and Shereener, Orisun Productions’ show Playfight will play from the 2nd to 3rd June as part of Theatre Peckham’s Fringe Festival. How are you both feeling ahead of the show?

There is always a certain amount of anxiety around sharing the work you have been creating and collaborating on. Particularly with a project like this which is so personal to me and has been with me for many years. I first started developing it in 2019 along with Orisun co-founder and actor the late Seun Shote.
Playfight is an examination of the corrosive way in which racism determines the direction Black lives take, the show following best friends Kai, TJ and Zara who initially inseparable encounter change that challenges this. Written by Christina Alagaratnam, what inspired you both to work on the text?
The play is inspired by an incident that happened at my son’s primary school. He was wrestling – as boys sometimes do – with a group of friends. They were all Black or Brown boys. A white female teacher immediately broke this up in a very aggressive manner – it was clear she thought they were naughty or something really bad was going to happen. Meanwhile in another corner of the room some white boys the same age, were engaging in boisterous play similar to my son and his friends. The difference was, the white boys were just left to play; with their boyish games just petering out naturally. I wanted to commission a piece of work that examines how this difference in treatment, borne out of skin colour, might influence a Black child’s development.
Playfight forms part of the inaugural Theatre Peckham Fringe Festival. Having enjoyed a sell out run of the show last year, what does it mean to yourselves to help form this important platform?
We are absolutely delighted to be part of the inaugural Peckham Fringe Festival! I think there were approximately 150 submissions so the competition was fierce. We are dealing with a larger space and competing against other shows so it will be more difficult to sell tickets but we are nonetheless happy to be part of the Festival and among such fantastic companies telling amazing stories!
The cast consists of Cece Cox, Edward Kagutuzi and Joshua Okunsya. The show has been directed by yourself, Leian and produced by yourself, Shereener. Movement direction has been done by Waddah Sinada and Rhys Dennis, set by Ellandro Monteiro, lighting by Filip Vermieren and sound by Kieron Morris. How have you all worked together to realise the show?
I am producing the play. Leian is directing. I am not directing – he is much better qualified to do that! He has just finished being the staff director on Small Island at the National! The cast are phenomenal and have worked so hard. The creative team are also wonderful; working beyond expectations for little pay. We all care about this project and the story it tells about the vulnerability of young Black males.
What have you learned/taken away from the creative process?
To expect the unexpected! To know that the value of your work cannot be measured in ticket sales. And to keep pushing, finding and playing.
What can audiences expect from the show?
Audiences can expect to be challenged, moved and delighted not always at the same time!
What would you like for audiences to take away from the show?
I’d like the play to stimulate conversations and debates between family and friends about the important themes raised. Ultimately, each member of the audience will take something different away from the play, but I hope they appreciate that all children deserve to have a childhood.

Playfight will show from Thursday 2nd until Friday 3rd June 2022 at Theatre Peckham as part of their Fringe Festival. To find out more about production, visit here…

« Previous post
Graphic novel wins at the 2022 Society of Authors’ Awards!
Next post »
Writer Max Wilkinson talks about his show ‘Rainer’ showing at the Arcola Theatre