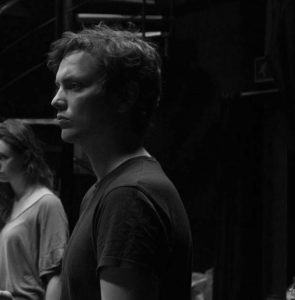 Within the past decade, the face of food delivery has shaped how we dine at home, food delivery apps our new normal, delivery drivers now a staple on our streets, with food now accessible at the click of a button. Inspired by his own experiences within the service and delivery jobs sector, writer Max Wilkinson created show Rainer during the initial 2020 lockdown, an unpredictable time period that would place a higher demand on the delivery sector. Rainer explores the experiences of the eponymous solitary bicycle delivery driver as she whizzes across London in response to demand, placing her much needed voice centre stage. Currently playing at the Arcola Theatre, Max tells us more about exploring his own personal experiences further, the show’s two year creative process and working with his fellow team to realise the show!

Hi Max, you show Rainer will play at Arcola’s ‘Arcola Outside’ space from the 1st to 18th June. How are you feeling ahead of the show?

I’m feeling really good about it, fortunately! We did it for a week back in October last year and we had a really warm reception. The Arcola’s new Outside Space is this brilliant alternative space like a large warehouse where you can hear helicopters fly over and sirens and this, as Rainer, barked around the stage delivering, became this perfect soundtrack to the piece and added this expansive depth: it’s as if you’re sitting in the heart in the city.

Now we have the very talented Jethro Cooke designing an amazing soundtrack, Zoe Hurwitz on design and Jamie Platt on lights to expand the show even further. And everyone’s working flat out and really behind it so yes, I’m feeling good.

I think it was very cathartic. I spent so many years riding around London, mostly at night, between service jobs, catering events, construction, delivery: anything really to pay the bills whilst always furiously writing.

I went to art school and always thought I’d go into film to be honest so when I left art school, having made some strange plays there, I had to start from the bottom: getting to know the theatre seen, putting on plays and learning from mistakes. It was a long uphill struggle and as I finished Rainer and put it on the stage, I hadn’t realised the full extent of how much I poured myself into it. She’s in many ways me if I was braver, if I had become more isolated, more financially and mentally unstable; she’s sort of my hero and also warning of what ‘doing everything for your art’ can become…

So, I feel very attached to the play, and her.

Rainer was written during the initial lockdown in 2020 as streets drew dramatically and drastically quieter and was developed through Arcola Theatre’s ‘Today I’m Wiser’ Festival in 2021. How have these experiences helped to shape the play within the past 2 years?

Oh, massively. It started, as you mentioned, with the pandemic. I wanted a play about London, just descriptions of it really, and then I thought: who prowls around at night, observing the city, like a bird? And then, as I used to occasionally ride across the empty city during the pandemic, there was just nothing there save hundreds of delivery people criss-crossing the city.

So that’s where the idea for Rainer was born. As she says in the play, this is just one of many jobs she has done in her life but this one offers a deeper voyeurism so is quite irresistible to her.

There was also this moment during the pandemic when delivery and service-sector workers went from ‘un-skilled’ to ‘essential’ as we relied on them so heavily over the course of it. But, I knew this was a slightly empty gesture: these people still largely remained invisible. So, I wanted to tell the story of one.

Nico Rao Pimparé has directed the piece, Alistair Wilkinson has produced it and Sorcha Kennedy stars as Rainer. How have you all worked together to realise the show?
We’ve got a great team. Sorcha, our performer, I knew from a while back and when I was writing Rainer and then bumped into her in a park, I started to write the character with her in mind. She performs with real wit, and anger and heart but also with this compassion and fragility that is just basically the character of Rainer. She’s a fierce coward, a lonely loner. As much as she tries to hide this fragility with barbed ferocity, the more it comes out.

I think Sorcha plays these contradictions better than anyone. She’s also a master at accents and, as the show requires, embodies 20+ characters freakishly well.

Nico and I met quite recently and this is our first show together. As soon as we met, we spoke for hours about theatre and film and, as we started to work together, always had this very fluid communication and understanding. My writing is quite idiosyncratic and strange but there was never a moment where Nico didn’t understand any nuance of the text. His intelligence and sensitivity is rare in a director and it’s been a great process to work with him.

Alistair is a power-house and an unstoppable force, we’re so lucky and happy to work with them! We met just a few months ago and as soon as we spoke and ended the call, Alistair got things immediately into motion. Haven’t wet a creative and producer with such tenacity and commitment to the art, the show, but also core values of how theatre should work for communities and has a social responsibility to actually enact change.

Rainer is currently showing until Saturday 18th June 2022 at the Arcola Theatre. To find out more about the production, visit here…