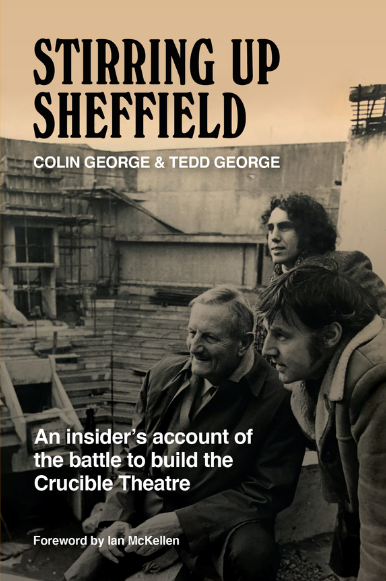 Written by the Crucible Theatre’s first Artistic Director, Colin George, and his son Tedd, with a foreword by Ian McKellen, Stirring Up Sheffield is the extraordinary story of a group of visionaries who came together to build a revolutionary thrust stage theatre in Sheffield. The radical design they proposed for the auditorium—which redefined the actor/audience relationship—aroused fierce opposition from Sheffield’s conservative quarters and several of the era’s theatrical luminaries. But it also galvanised a new generation of Britain’s actors, directors, designers and playwrights who launched a passionate defence of the thrust stage and its theatrical potential.

“Colin and Tedd George recall the remarkable adventure that became the creation of the revolutionary new Sheffield Crucible Theatre. Their story is replete with the bureaucratic and artistic opposition aroused by the radical design Colin George proposed for the theatre, while revelling in the excitement of giving a new shape to the physical relationship between audiences and artists. How a seemingly unassuming director of a regional theatre led the creation of the visionary stage that is the Sheffield Crucible – leaving an iconic legacy in his wake – is a stirring story for our times.”

In his acceptance speech Tedd George, who edited and completed the material begun by his father Colin, said:

“Few people know nowadays that the Crucible’s thrust stage design aroused concern, confusion even anger and that the theatre was built against huge opposition …. My father struggled for nearly 40 years to write about his experience of this enterprise to build a radical thrust stage in Sheffield. From writing the first manuscript I think he was able to come to terms with his creation and once again feel gratitude for the opportunity Sheffield had given him.”

The winner was selected from the following shortlist:

•    David Bratchpiece and Kirstin Innes: Brickwork: A Biography of the Arches(Salamander Street)

•    Colin George and Tedd George: Stirring up Sheffield: An insider’s account of the battle to build the Crucible Theatre (Wordville)

2022 marks the 24th STR Theatre Book Prize, which was established in 1998 to celebrate the Society’s Golden Jubilee. The aim of the Book Prize is to encourage the writing and publication of books on British-related theatre history and practice.

To find out more about the Society for Theatre Research, visit here…

« Previous post
Call out for Reviewers: London Pub Theatres Magazine are looking for writers to join their team!
Next post »
ZOO Southside AND ZOO Playground ARE BACK FOR 2022 EDINBURGH FRINGE!