To be red pilled is for someone’s world view to be radically shifted by ideas that deviate from the mainstream. Those familiar with the concept, one which was introduced into our popular culture by 90s sci-fi classic The Matrix. With the Internet providing a means to easily access an ever growing multitude of virtual platforms, our age of forums have allowed for users to interact with one another, no matter their location and air various views and ideas. An exploration of our social media driven world and the cultural war that continues to see traditional ideas challenged by progressive ones, Blue Bar Productions’ Red Pill observes the gradual deviation from reality – the impact of extremism and radicalisation on both the individual, and those around them. 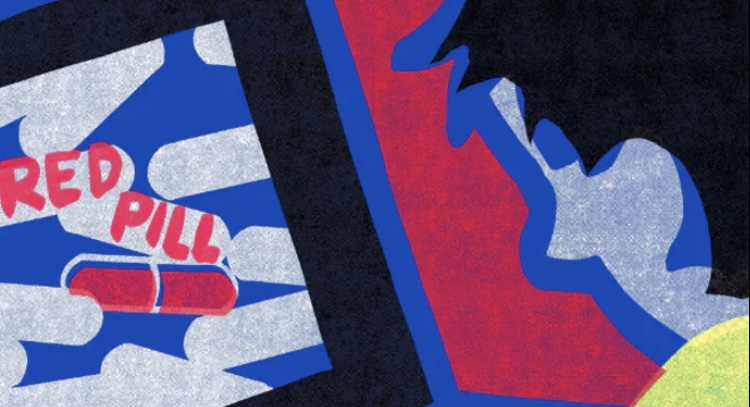 Flatmates Chris (Sam Toocaram), Cassie (Amy Harrison) and Joe (Michael Hogg) are united by their love of gaming. Hangouts typically consisting of the household catching up on life’s dramas over livestreams and movie nights. After a brief fling between Chris and Cassie results in the pair ultimately going separate ways – Cassie non committal, Chris madly in love with her, this,  mixed in with Chris’ current zero hour contract work situation begins his heartbreaking spiral into depression, a vulnerability that very slowly has him turn to what he believes is the answer to his problems – far right YouTuber ‘The Tylenator’. Here, Tyler (Cai Sutherland), with his growing list of subscribers delivers doctrine in reaction to where we’re currently at culturally, one where inclusivity is at the paramount of conversion and cultural changes. ‘Gamergate’, a hate campaign, with questionable origins at that, geared at drumming up disdain and supposedly building up a case to oppose our current day. Sam Went delivering a carefully written account of where we’re at technologically and culturally, the age of anonymity allowing for anyone to air their views and ideas to impressionable audiences. Chris an individual ignored, invisible, turning to the virtual world for a source of support, ultimately feeling let down by society. Lois Attard directs an entertaining, thought provoking evening, one swaying between reality and the virtual realm – video projections of forum chats capturing the colourful interactions between Chris and an anonymous far right figure, language progressively becoming more shocking as they go on, but cleverly showcasing the discriminatory underbelly of the Internet. Red Pill showcasing the crossroad between mental health, radicalisation and the tech we turn to as a means to resolve our problems. We witness the resistance to change and the resorting to old patterns and old ideologies, a timely watch.

Red Pill is currently showing until Saturday 18th June 2022 at the Lion and Unicorn Pub  Theatre. To find out more about the production, visit here…