38 shows have been announced as part of the inaugural A Pinch of VAULT, a new festival of live work-in-progress shows presented by VAULT Creative Arts. Taking place at VAULT Creative Arts’ brand new café, bar & creative space, The Glitch, and popular pub, Vaulty Towers, both in Waterloo, from Tuesday 5th July – Saturday 16th July 2022, A Pinch of VAULT will feature exciting and original shows from leading independent artists, across theatre and comedy. 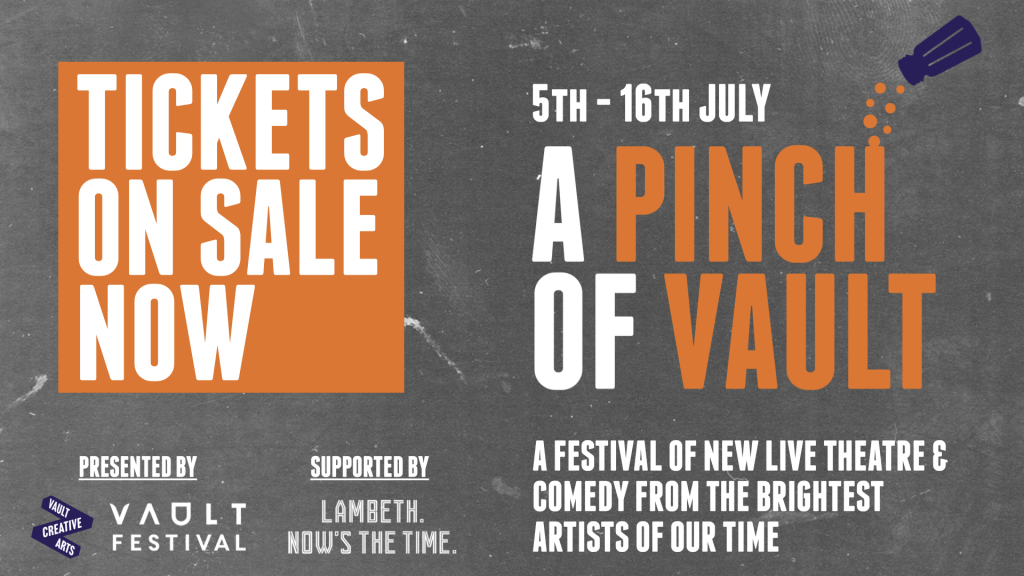 A Pinch of VAULT sees VAULT Creative Arts, producers of VAULT Festival – the UK’s leading independent showcase of live performance and artistic talent, bring another innovative new project to the heart of Waterloo. The two week festival provides early and mid-career artists with a vital opportunity to showcase work that is currently in development in front of a live audience in a safe and supportive environment.

The programme features theatre and comedy from artists that had previously been programmed at VAULT Festival 2022 and were impacted by the cancellation.

The theatre programme is filled with unmissable new work from award-winning artists and leading live performance makers, tackling a range of themes from the joyous to the challenging in inventive and exhilarating ways. Award-winning Irish writer Barry Mcstay’s Zeb and Eoin explores what happens when a queer couple’s dreams of adopting are thrown into disarray, and Scram & Scrum Theatre’s An Apology to Lady Gaga offers a tender yet angry portrait of a relationship divided by “outness”, and the paradox of pride. Get Happy is a vibrant and pulsating debut hour from Joseph Aldous examining queer individuals’ relationships to happiness and LGBTQ+ mental health.

The climate catastrophe and the future of humankind are prominent themes in two shows coming to A Pinch of VAULT. VAULT Festival’s Staging Change Award winning play My Lover was a Salmon in the Climate Apocalypse by Bradán Theatre is a gig theatre call to arms, whilst award-winning company leo&hyde present The Coffee Shop Musical narrated by two AI robots, featuring Liv Alexander (SIX) and Andrew Patrick Walker (Bat Out of Hell, Jerry Springer the Opera).

Socially conscious and issue-driven shows tackle modern affairs head on throughout the programme. Nothing to Perform (N2P) present the UK premiere of Cold, creating a futuristic world with live foley sound effects in reaction to the escalation of the Ukraine war. Home Sweet Hell by Maedb Joy, founder and co-artistic director of Sexquisite Events that platforms sex worker artists, explores performing for the patriarchy and the decisions we make in the face of poverty, and Beneath A Cups by Thistle and Rose tackles themes of body dysmorphia and the pressure put on women to conform to societal standards.

There are also a host of shows that offer something completely different that will have you smiling from ear to ear. PT Goodbod: The Live Experience by Adam Goodbody is a mad ‘workout’ that is fast-paced, fun-filled, and action-packed, and captivating storyteller and Musical Comedy Awards Best New-comer, Faye Treacy, brings her new show Where’s Your Head At? Audiences grab the controller in Save the Princess, the interactive darkly-comic play that dives into the video game multiverse from The UnDisposables, and join Katie Paterson for  a camp, chaotic cabaret about the Pill in Side FX. There’s also a splendidly stupid dance spectacular from Movements in Motion who have cooked up their most extravagant show yet, a dance show by clowns in a tiny, tiny space.

Striking stories from both home and abroad are told with smiles and tears in shows including Royal Court Theatre Writers’ Group participant Mengqi He’s new play The Other Me in the World that explores the love/hate friendship between two Mainland Chinese girls who live in the UK, and VAULT Five shortlisted artist Rita Suszek’s London: Recalling that asks what you do when you celebrate your 10th anniversary of emigration in a genre-bending, brain-swirling joyride of a show.

The comedy programme highlights include debut hours from many rising stars of the UK stand up scene. Multi-award winning comedian and junior doctor Michael Akadiri presents his eagerly awaited show that traverses the challenges of life within and outside the NHS. British-Lebanese comedian and Edinburgh Fringe sell-out Isabelle Farah brings an ode to every irresponsible choice she’s ever made. Maddie Campion is back with a new stand-up show Mads Mads Mads, and Funny Women Award Winner Thanyia Moore presents never before seen material for one night only.

This year’s comedy programme also features an array of shows that tackle current affairs in honest and hilarious ways. Carmen Ali brings a solo stand-up show about her life as a sex worker and the hardship and humour it entails, whilst Rebekka Turner explores her journey into neurodiversity with jokes, wordplay, characters and impressions. Latin American comedian and winner of the Funny Women Stage Award, Lara Ricote, will present minority jokes for minority crowds in GRL/LATNX/DEF about what it’s like to be Latin, deaf, and a girl who’s now a woman. Musical comedian and Brighton Fringe Award Winner Simon David takes on the community he loves to hate in White Gay, and Erika Ehler promises an hour of boldly offensive and immaculately crafted jokes in Femcel.

Other comedy highlights include unmissable performances from the likes of Canadian comedian and rising star of UK stand-up Kate Barron with a raw, honest and hilarious hour of tales. Multi-award winning performer Elf Lyons promises ghosts in her new comedy show inspired by Stephen King. Radio 1 writer and star, and BBC New Comedy Award finalist Andy Field is an Ideas(,) Man and has made a show out of his favourites. Scientist and Mercury Comedian of the Year Nominee Ashish Suri shares stories from the Asian Motherland, and BBC New Comedy Award Nominee Harry Wright shares what it’s like to grow up in the rural countryside as a queer boy with autism.

A Pinch of VAULT will also see the launch of a brand new project from VAULT Creative Arts, A Bridge Through Time. Under the banner of VAULT Quests, audiences will embark on a fascinating journey of discovery through Waterloo, solving clues to access hidden parts of the city, and exploring the rich history of the local area.

A Pinch of VAULT promises a thrilling mix of relevant, absorbing and hilarious new live performance across theatre and comedy, with exciting and original work from leading artists, and plenty of fun surprises in store for audiences. With tickets all priced at only £5, it’s an affordable and entertaining way to spend a Summer evening.

A Pinch of VAULT Festival will take place from Tuesday 5th until Saturday 16th July 2022 at the Vaults. To find out more about the festival, visit here…

« Previous post
Red Pill @ Lion and Unicorn Review
Next post »
Helen Mirren, Frank Skinner and Carlos Acosta are set to appear in a brand-new series of The South Bank Show this July, alongside the return of The South Bank Sky Arts Awards